Someone please help this guy!

Does he still live in the 80s?

I don’t know the sales of these products. Obviously I would imagine a sizable population who will go for them, probably because of the strange phenomenon that people tend to think the better looking a vaccum cleaner is, the less reliable or powerful it is. This one almost speaks “I’m ugly, because I’m powerful!”

Seriously, what’s wrong with this guy? Or is it me?

Maybe bad '80’s retro is the next big design trend.

It’s another case of the old CEO micromanaging the creative department. Gotta love it.

I guess my concern is, since it’s kinda popular on TV, perhaps it’s selling well. Now, looking at the features, they are common to pretty much all the vacuum cleaners on the shelf. If my product is lacking in design, I’d better make it up with performance superiority. Not in this case. Furthermore, they are not cheap!

Or, is his strategy about selling these to old folks of his generation? I think it make sense. Most old folks don’t care about aesthetic in vacuum cleaner. In fact, they will probably go for the least fancy, and most familar looking vacuum cleaner! Considering the population of old folks who does their own cleaning, as oppose to younger generations, I think this is somewhat smart.

So I am in the 20s and I hate it. Maybe that means success to them.

The sad thing about it is that Oreck actually has an in house industrial designer!

The sad thing about it is that Oreck actually has an in house industrial designer!

I don’t think that’s the sad part. The sad part is for whoever is the in-house designer.

I’ve always been curious about those things… They’re like the last thing in the universe to get designed.

Here’s the story, cobbled together from their own website:

“While Whirlpool was unable to make a success of its upright vacuum cleaners, Oreck believed that with a redesign of the machine, he could give it a new lease on life. So Whirlpool gave him exclusive rights to market them throughout the United States. The company also gave Oreck free reign to redesign the machine and then produced his prototype for him under the RCA Whirlpool label.”

“Oreck Corporation began as a company manufacturing upright vacuum cleaners for the hotel industry in the U.S. The concept was to design a lightweight yet powerful and durable vacuum that hotel housekeepers would prefer to the very heavy models available to them. The idea proved so successful that now over 50,000 hotels throughout the world use Oreck vacuums. After a short time, hotel personnel asked to buy the machines for their own use, which gave the Oreck Corporation the idea to sell its unique products to the general public.”

So there you have it: their “institutional” design is, in fact institutional–their bread and butter is the hotel service industry. They care about weight, size, price, durability, warranty etc., not aesthetics or features.

The question is without that support, would they be able to survive in just the consumer market? No way.

At the very least, couldn’t they at least come up with their own color scheme, and not rip off the Dyson?

And yeah, being an in-house designer @ Oreck must be painfully boring!

As Wayne & Garth put it, “It sure does Suck!” (in referance to the “suck-Cut” hair cutting system that attached to a household vacuum cleaner).
LOL!

Dyson looks great but have you ever tried to use it? Since my vacuum sits in my closet most of the time I would rather have one that both functions well and easy to use then be nice to look at.

Granted they should be able to make this thing look better. I’m sure that is part of the reason why they see Dyson as a competitor.

This prompted me to think of designs that are ugly, out of date, or look like engineers called the shots. I think there is a market segment for these kinds of products. There is a portion of the population that associates poor design with high quality, and actually shops accordingly.

Oreck: no one can buy that thing for the looks therefore it must be quality

Hummer H1: no one can buy that thing for the looks, therefore it must be versatile/robust/capable

May be their concept for the SUV.

I think the sexiest vacuums out there are made by Electrolux.

As far as Dyson goes I think it’s ugly. It looks like a rocket off an f-16, not something I’d want in my house. That yellow color isn’t one I see in an average home. The success of the Dyson is something I’ll never understand, but if someone would like to point out to me what I’m missing that would be welcomed.

In my opinion the Dyson is not a huge step above the Orick as far a looks go.

Hey, we own an Oreck, and it works great! It may surprise some of you, but looks are not the most important thing in a vaccuum.

May be their concept for the SUV.

That would be this. 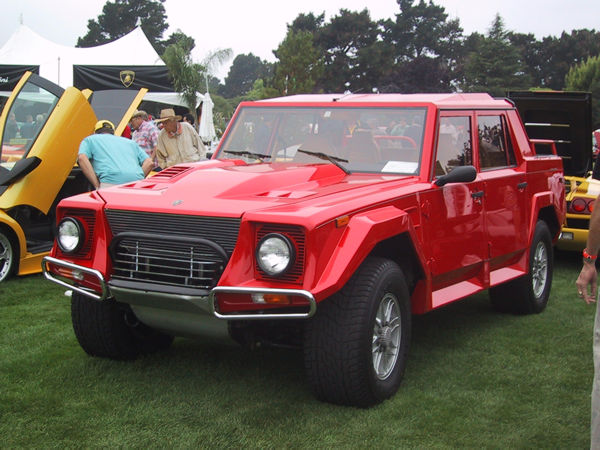 Ugly vacuum, though, I agree.

only if you designed it

They use those vaccum at hotels. I see them at every hotel I stay. The maids seem to love those, because they are light and fits on their maid’s cart. I think they’re really easy to operate also. It would make sense to market them for older generation.

They use those vaccum at hotels. I see them at every hotel I stay. The maids seem to love those, because they are light and fits on their maid’s cart. I think they’re really easy to operate also. It would make sense to market them for older generation.

Yes I suppose. There are some things that I use which have remained the same for as long as I can remember. There’s a reason why they remain unchanged. I do think they can be improved in terms of details. Eg. make the handle more ergonomic etc. Subtle improvements will be a nice touch.