Once praised by ID'ers, now...not so much

After a recent visit home to visit my family I went to the store with my parents to help buy a new vacuum and supplies and I was shocked at the number of used Dyson’s that the store had for resale. I talked to the shop owner about it and she said that while they are really strong machines, they break constantly and people with allergies have returned them because the canister releases mass amounts of concentrated dust, hair, and other things when its opened into the trash. I thought this was amusing considering how many people I heard praising them for their great design when they first came out.

What other products have people encountered recently that started out as highly praised design acheivements but ended up in the scrap heap?

This is something I’m really concerned about as someone involved in design is the amount of crap that we are all pushing out onto the world.

The canister vacs like Dyson release all the dirt back out when you open them and if you have serious allergies this can be a major problem. Others vacs like Oreck have hepfilter bags that filter the air and don’t spray you with dust when you take off the container.

How much are they in the resale shops? I hear good things, and if the allergy stuff is a problem no vacuum is going to not release that crap back into your house. That’s why you dump it into a trash can outside.

why do you crap on a toilet when you can just go outside every 16 minutes, especially when its raining.

Got a candy wrapper? go out to the dumpster and throw it out. houses of the people of the world should not have any trash cans indoors. Got a wad of paper in your office on the 16th floor? go outside and dump it in a street garbage can.

I think many people confuse good aesthetic design with good functional design or they assume one equates to another. Dyson solved one problem by eliminating dust bags but created another. As for the reliability thats just another design flaw, what good is a 500.00 vacuum if it is broken. The Dyson looks good in a museum though.
I personally like the Electrolux line of Vacuums I have the stick vac for my hardwood floors and love it for everyday use. If i need a dust buster i just push a button. No cords to get in the way either. the thing lives on the charging base so it’s always ready to go.

This came up on the blog at the beginning of June
http://www.core77.com/corehome/2005/06/is-this-case-of-product-design-working.html

I think the purpose of the post was to identify other products with a similar problem, starts great - ends in mediocrity.

Personally the last major product failure I encountered was when Stark did a collection for Target. When they first came out I remember people in the store talking about how cool the designs were. But shortly after that it became apparant that the products were total crap and Target moved everything to the clearance endcaps.

Its sad to know that every Target store in the US probably had similar results and that all of that product would be destined for a trash heap somewhere.

Tivo to go: Takes about an hour to transfer one TV show to your PC. Yeah, right!! Big article on their user-centered design process in User Experience magazine–no mention of this technical flaw. 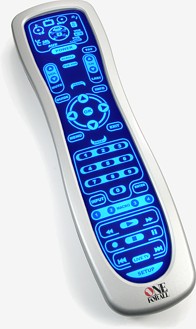 Kameleon Remote: Drains batteries every 2 days due to twitchy motion sensor that illuminates the face. Cool, but worthless.

Kitchenaid Timer: Bought it for $10 on clearance, and now know why: totally unusable interface. You use the chrome dial to set the digital timer, but it toggles from HOURS to MINS to SECONDS only by a 5 second mode-switching timeout! Most people I hand this to with the instructions: “set the timer for 5 minutes” can’t accomplish the task at all (most end up setting it for 5 hours) the ones that do end up setting it take upwards of several minutes. I decided to keep it as a blatent example of Industrial Designers failing to design the user experience.

I guess you can say the Dyson really does suck!!!

My experience has been that the bagless vaccuum cleaners last 18 mo. to 2 yrs max. They are dirty when you empty them (you get a fine dust film on your body and clothes, not to metion I can only exhale for about a minute, then I have to inhale no matter what the cloud has done.)

So I just bought a bag vaccuum (Riccar) that should last several years (5+) and can be serviced locally if needed. The parts are available domestically (US), so theoretically I can keep swapping belts, hoses, motors etc. It uses an alergen filter bag and the air that flows from the bag is filtered again before leaving the outer shroud . I’m gladly going to pay maybe $20/ year in bags for the opportunity not to get a dust shower. As for the land fill, I figure 12 bags per year for 5 years, then maybe the unit itself compared to 2 or 3 bagless units straight to the dump. If it lasts longer than 5 years (the length of the warranty) I’m in the bonus round for sure. I should get 7-10 years out of it.

Go to a vaccuum cleaner shop (not Target) and talk to the owner about how design meets the carpet.

Not a Dyson thread. Keep to the topic.

Remember this design atrocity?
The result of Apples revised focus on lifestyle vs. usability.

all i have to say is…

an atrosity from the beginning.

hahahaha, the suck and cut !
I want to get one for my dog

Wait a minute are you trying to say that someone actually praised the flowbee?

When one of us comes up with a really cool design, I think the tendency is to become champions and advocates of that cool design and become biased to its actual intrinsic value. I know that I tend to hype up products that I think are good examples of design. I can even site lots of examples and drop a lot of vocabulary about why I think the design is cool. Unfortunately, I do not usually know what everyone else will think of that design.

IMHO, I believe that designers do not own beauty or utility. Rather, we suggest possibilities and products, where the masses deside the usefullness or aesthetic value. Sometimes ID turns out like Disney’s Fantasia; it speaks well to the artsy crowd, but ultimately fails to connect with the masses.

For example, I think Stark’s Orange Juice Maker is a pretty cool looking object (or sculpture), but in essence, it is not a very usefull product. Tons of problems, but lots of stuff for designers would buy into.

Did anyone else notice that the guy in the flobee photo looks a lot like jeff foxworthy?

I know it isn’t him but I wonder if they thought about that when choosing him for the ad.

…current marketing wisdom indicates that people will buy just about any freaking thing for three easy payments of $29.99…it makes some feel better about themselves and it is cheaper than an hour with a shrink…but then you a bunch of crazy people armed with flowbees and juicers…