some of you are more into mobiles than I am, so you might be able to give
me a hint. After 6 years I am willing to part with my Sony K800i.
First thought being the I-Phone 4S. I have some concerns with that though:

I’d love to use that new phone for a minimum of 5 years, eventually 10, as
I feel it is not feasible for environmental reasons to get a new one evey 2 years.

Did any of you guys use your gen one I-Phones for 4 years or more? I tend
to doubt that an I-Phone 4S will last the test of time too well.

What it should be able to do:

Is there something like a leather man smart phone?

There are a few rugged smart phones out there. The Moto Defy is supposed to be fairly strong. If you really want something strong, check out the Casio G’zone (commando »). Cant really say how well the battery is or the camera, but Im sure engadget has a review.

Writing this on My first gen iPhone. Broken glass (plan on fixing it soon) and ome of the speakers are dead, other Than that and very slow Internet speeds, I can’t complain at all

In the meantime I had a second look into the subject. The Casio is not
available in Germany at the moment. Which leaves three “rugged”
smartphones on the market over here. Samsung, Motorola, Sony.

All of them do not meet my Camera needs.

Alternatively I’d like to know more about Otterbox. Any hardcore
OTTERBOX users here?

Otterbox works. It’s really ugly, but it works. One of my classmates had a bright pink one and she dropped it all the time.

My other friend has a double case by another manufacturer that’s made for construction workers (he’s a civil engineer). It has a thick plastic case and a silicone case on the outside.

I would just get the iPhone with a really thick case. It will definitely last you 4+ years.

Any phone with an integrated battery is not going to last you 4 years without disassmebly and replacement.

With that said, if the only reason you want the phone to last that long is environmental guilt, there’s no reason you can’t sell the phone secondhand to another person. I always sell my phones, gives someone else (often in another country) an opportunity to have technology they wouldn’t normally be able to afford and extends the life cycle. Same logic as buying a used car vs buying a hybrid.

The otterboxes are very durable. The Defy…well lets just say they’re hedging their bets on you not testing it’s limits as much as you’d think.

The iPhone 4S also has the best camera sensor available on the market right now, and thanks to Apple supply chain they’re the only one who is going to get it.

WAIT. You are telling me the I-Phone has an integrated battery???
Case closed, I guess.

for the record, my sister and my old boss have used their 1st gen iPhone since 2007, both without battery replacement.

edit. Check out the latest HTC stuff. They do some nice metal unibody phones that feel really good. Their Sense UI is also the most palatable of the Android OEM skins.

iPhone is pretty durable if you are not a complete klutz. Battery never an issue for mine either. I have a original iPhone that is 6 years old, a 3Gs that is 4 years old and an 4S that is 6months old. All work fine and have survived a few drops OK. I replaced one board on the 3Gs once but other than that no problems. I’ve never used a case.

iPhone is also easily serviced by 3rd party people who can replace screens, batteries, etc. if need be. Not sure if you’d be able to get parts/service for whatever random Samsung you find.

This one looks good for being so rugged & (ip67) waterproof, but has a smaller screen and is thicker than many phones. I’ve seen it in person and it’s nice

I have an iphone 1G and while the battery is not fantastic, it and the covers/glass have held up pretty well for me - they seem to make them about as good as they can be made. Meanwhile, another phone I had along the way, a motorola, had it’s screen brake on me within months.

With all the investments you see companies like Apple putting into glass factories and equipment, it doesn’t seem glass heavy phones are going away soon and they’ll probably get stronger and stronger

I know nothing about phones, but what about the Nokia C3? I’ve heard it’s popular in the developing world, so I would assume it’s solid. Far less cool than an Android or iPhone though:/

Meanwhile, another phone I had along the way, a motorola, had it’s screen brake on me within months.

Hmmmm, it wouldn’t be THIS one would it? 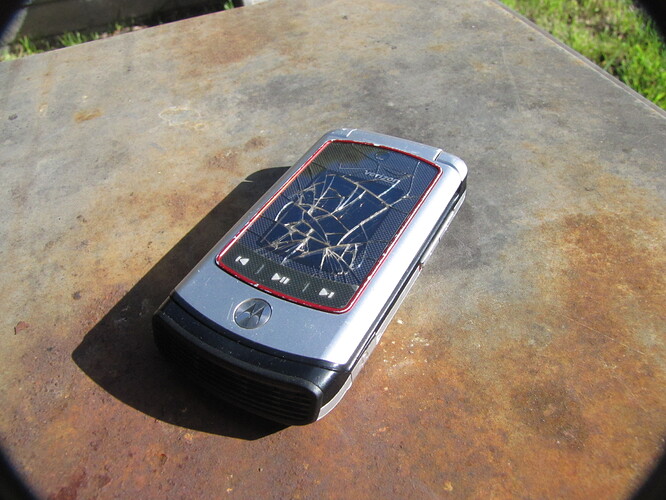 IMG_3614.JPG2592×1944 1.34 MB
Mine lasted almost 24 hours before the front screen cover shattered. It was in my pocket and I have no clue whatsoever as to how it occurred. It was touted as “ruggedized military grade” (Mil-Std-810F*), with an extra loud speaker; as a heavy equipment operator, that’s why I purchased it. But the pissoir; the warranty was considered void because, “it has obviously been physically abused”. Military grade?!? Sure hope their troops are issued this device.

If it weren’t for the fact that a new conformal battery cost almost as much as the v750, I’d probably still be using my old LG VX8100; a bit clunky with it’s exposed antenna, but a completely
reliable device. In retrospect, I should have bought the replacement battery.

minus your Android requirement, but:

A friend on mine swears by the waterproof Sonim phone. http://www.sonimtech.com/products/xp5300.php His survived submerged for two hours, emerged from the mud when the tide went out and it sent a signal to be found. I’m going to get one this year for marine use. I am done with smartphones and all the compromises they entail.

The Sonim XP5300 Force 3G is a premium, ultra-rugged 3G UMTS phone designed for professionals and adventurers who are exposed to the most hostile environments every day. Since it was engineered with built in safety features and backed by Sonim’s industry-leading 3-Year Comprehensive Warranty, transportation enterprises and mountaineers alike know they can count on the extreme reliability of the Sonim XP5300 FORCE 3G.

Building on lessons learned from serving half a million customers in the most extreme environments, this Sonim RPS certiﬁed phone was engineered to handle any condition. The Sonim RPS go far beyond MIL-SPEC ruggedness keeping critical activities running smoothly. Even wastewater 2 meters deep is no challenge for this IP-68 rated, water and dust proof handset, which can also be dropped from 2 meters onto concrete. The 2 inch high-resolution display is protected by a class leading 1.5mm thick Corning® Gorilla® Glass lens for the highest level of scratch and shock resistance.

The Sonim XP5300 Force 3G has enterprise class GPS capabilities for optimized accurate real-time location tracking. The 2 MP camera with video capture and a bright LED ﬂash and digital zoom captures critical information while safety is enhanced by strong antenna performance, the industry’s longest talk time of up to 12 hours on 3G and 22 hours on 2G and active noise cancellation. In addition, Sonim has further improved the reliability, speed and available memory for bundled JAVA applications and well as pre-tested and certiﬁed third party JAVA applications that are available for download on the Sonim JAVA Application Manager (JAM) store.