What cell phone do you own?

During the past month or so I have been interested in getting a new cell phone but can’t make a decision. I was wondering what phones/carriers everyone is using and what they think of them from a designers point of few.

I have been looking at smart phones since I have an increasing need to access e-mail/messaging while running around. I am a Verizon user and I have to say their smartphone selection is pretty pathetic (read: I hate Blackberrys). Being a Mac user I really like the iphone but I hear AT&T is pretty worthless at times, and I don’t want to switch just for a phone. The other day I was at an AT&T store in Boston and the salesman was like a used car dealer, he was saying anything to sell me the iphone. He told me I could get a discounted plan for working at The Home Depot (I don’t work there, and didn’t tell him that I did) and would waive the activation fee if I bought the Applecare plan and some accessories (activation fee=$36, Applecare+accessories=$80-$100?!?) one word, sleazy!

1st gen iPhone. Good for everything except um… calling. Get a jailbroken one of ebay with no contract, the functionality is almost the same as the latest model.

2 year old Samsung Gleam from Verizon. It makes calls, and has great predictive text (I can even swear!). Plus since it’s on Verizon, it actually works for making phone calls. I don’t need to update my fantasy team from my phone, so I don’t care what I have. My 2 cents.

Go to the dark side Luke…

iphone 3GS. Not great, but slowly improving at actually being a phone. Voice isn’t a big priority for me, I use it primarily for maintaining my corporate/personal email, surfing the web, and playing games.

AT&T service would be the big kicker. I know when I go back to visit my school I have the worst reception ever. But for the most part around where I am in NY the 3G service has improved considerably over the past 12 months.

I have the magic/mytouch android phone on Tmobile. Love android, and this holiday the market is gonna be flooded by android phones on every carrier. Apps store is very decent (pretty much every functional app on the iphone is in the android in some form or another).

The plan is cheaper than AT&T on Tmo but good reception is only possible in the city.

I see big things happening for android, as its being ported to netbooks and other devices.

I have a first gen iPone, and a Blackberry Bold. Both on At&T.

I also have an HTC Diamond I used to run on T-Mobile, but is just sitting there right now.

I like the iPhone the best. Just works for me. I find the Blackberry Bold’s menu’s unintuitive, the trackball is very odd feeling and I always move when I try to click, the web browser is horrible, the music player seems dated, and the solitaire game is horrible.

I have the iPhone 3G and haven’t had any problems with AT&T.

It Does run a bit slow in Hong Kong, Taiwan and inland China. I heard it’s due to they are on the 4G network. iPhones and Blackberrys from the USA / Europe run slow on their new network.

It seems like every time you get something new, it’s already old.

I just wanted to chime in for those who don’t have a cel. Well, actually, that’s not 100% true. I have a Kyocera cheap arse phone that uses cards from Virgin. I use it in the US (two weeks a year?).

I have a 3-4 year old motorola razr on verizon. Its slim and fits in my pocket well and i can make calls and text from it and have never had any issues with it. The only thing i could ask for is a phone with a full keyboard for faster texting, but im not willing to sacrifice the size of the razr for it. The closest i have seen was the samsung alias i think, havent checked all that recently though.

My cellphone is one of the products i have that is almost strictly utilitarian and i have no desire to have the latest and greatest, which is nice considering all the other types of products that im constantly wanting a ‘new’ version of.

3GS iPhone. Can’t beat it in terms of browsing, productivity and ease of sync (im on mac if it makes a difference). I previously had a 1st gen jailbroken iPhone and wouldn’t have updated if it had not gone all wonky (tried to update the OS to 2.1.14 to get apps, but lost all wifi and had other issues).

iPhone is great, but I admit not perfect. The biggest complaints I have is the hassle of switching between apps sometimes (for example getting an email notification of a new core77 forum post then clicking on it to go to safari), where it doesn’t keep the same viewing mode (ie. i’m in landscape viewing in email, but when switching to safari it is set as portrait and vice versa). Overall though a very enjoyable experience. The amount of useful apps alone puts it far and above any other phone I’ve seen (though never seriously looked).


Previously I was on a samsung phone I got in HK about 3 years or more ago (pre-iPhone launch). Ultra series, can’t recall the model though I have it around still somewhere…Super thin (so thin I actually broke it in half in my pocket), but for just calling and basic calendar stuff it was OK. I wouldn’t expect much from such a thin phone (5.9mm thin - almost half the thickness of an iPhone), but if you don’t need web/email it was OK. That being said I don’t think I could ever go back to being fully “connected” like on an iPhone…

On a side note, I’ve never understood why cell companies don’t do something like a free trial. I know so many people who thought they didn’t need email, web, etc, only to finally give in an say “they could never live without it!”. If the carriers could offer a free 30 day trial of a full smartphone I would doubt there would be many to go back to living offline and unconnected!

I am using an HTC Touch Pro 2. The voice/audio quality is amazing in both normal and speaker format. I enjoy being able to utliize the fold out keyboard to manage my e-mails.

The touch screen is a “little” slow/clunky and it’s heavier than most phones. But I would reccommend this one for business purposes.

LG Shine. Sucks. Who would have thought an LCD screen behind a mirror would be impossible to read in any type of sunlight?

Recently Purchased Palm Pre. Ha…I noticed that I’m the only one so far. It seems that the design world is primarily using the iPhone, which is no surprise; Apple has engineered desire into their products about as well as anyone can. Until recently, I had my heart set on an HTC Hero running their Android Sense UI, but once I saw the US version, I was a little crestfallen. The euro version had much better industrial design details-including the chin. After speaking with the guys in the Sprint store who had used the Hero before it recently hit stores, they recommended I go with the Pre.
I have to say, the Pre is an absolute joy to use. The industrial design of the phone is not necessarily groundbreaking, but the way it works in unison with the Palm WebOS(which is beautiful!) is truly awesome. The portrait-style slider keyboard seems cramped at first, but after a week I was extremely efficient with it. The screen is bright, and the processor makes web and apps incredibly snappy. One of major drawbacks of the Pre is it’s lack of applications, but this is an OS that is in it’s infantile stages and will only continue to improve as it’s user base grows. There is also an excellent “homebrew” app scene that provides hundreds of apps for free before they are accepted into the Palm app store. There are also tons of patches that add functionality to the phone that were not there straight out of the box. The multi-tasking experience on WebOS is something that has to be used to be understood. It is truly valuable, and I don’t feel Palm has done all they can to advertise how well it actually works to the public.
Sprint was not the best when it came to customer service, but in recent years they have done a complete 180, which was what compelled me to stay with them. My family plan is manageable; a deal, actually, when compared to the iPhone/ATT plans. My service is impeccable; dropped calls simply don’t happen. If you are a new subscriber, I believe you can get a Pre at Walmart for $80 with a 2 year contract. Pretty good deal on an excellent device with TONS of potential. Good Luck. 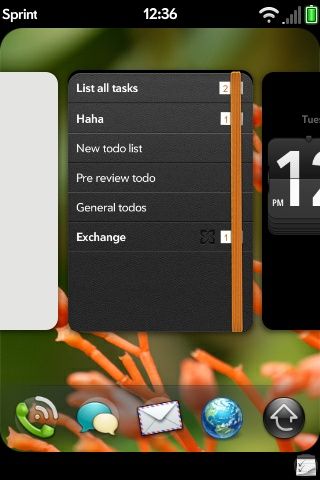 About 2 year old Samsung a727. On AT&T. Service is ok, but it often drops calls when it leaves 3G. It was the thinnest phone I could get at the time, and I have no need of a data plan, so I just wanted a slim profile. I have a touch, so all I use if for is the phone aspect. Works well with Bluetooth, but texting is a pain in the butt. Decent camera, for the rare occasions I use it.

I have a blackberry bold, i dont have an internet contract though so i just use it for calls and texts, i like the full qwerty keyboard and it has good voice clarity and good signal

UK phone, SkypeS2… hate it. The service plan via three is amazing though, that’s why I bought it. Pay for the phone once, £30. Top it up once (and only once) £10. Skype free forever… even if I run out of minutes… it’s crazy but perfect for calling overseas. Gotta love the fierce competition over here

I think I’m going to jailbreak though, the S2 interface is just too far backwards from the iphone

iPhone 3GS (black)- When I finally finished my undergrad I rewarded myself with one of these. It was the only phone I ever saw that could make me part with my Samsung E900. I absolutely loved that E900 to bits. Indestructible, beautiful slider mechanism, great functionality.

But having an iPhone has made the need to sit down at a computer pretty much useless for general email checking, light surfing, etc. I love now getting my emails each hour.

Im with O2 in the UK, because thats who they only dealt with at the time.

I own a Nokia 5300 cell phone ans so far I am contented with it. I enjoy the touch screen and wide screen features. Also, the ability to connect in the internet. But, I am not so satisfied with its 3.15 MP camera and I think its too blurry especially at night. CAAS

My first phone back in the US world of service providers controlling phones is a Motorola Droid through Verizon. My past phones were Treos and HTC smartphones. I liked them but I think the Droid is the maturity of the smartphones I have had. Only thing i don’t like is I have to sync my calendar and contacts through Google, which i know is taking my information and storing it forever.