My Next Cell Phone

I am in the position of needing a new mobile phone.

I have narrowed it down to three but looking for any other suggestions:

I really like the WiFi option for the iPhone and Nokia.

It really depends what you want to do with it. The E55 is (going to be) a nice device, but it has a few more features and buttons than you may need, plus the screen is too small for my liking.

You could always go for the N95 8gb, which has a much better camera (5mp, good photos in daylight, average at night) or wait a few months for the N96 to come out. S60 isn’t as good as the iPhone OS, but it’s much better than most other phone OS’s and there are a ton of developers making some nice appa for it.

Only thing I’ll say is if you do jump into the iPhone realm - hold off for at least a month. The 3G phone will be released very shortly so if you’re willing to settle for an old model you might be able to find one cheap - or at least you’ll wind up with the faster/newer version.

There are a lot of things I DON’T like about the Iphone. Call quality is mediocre at best - I get a lot of dropped calls on AT&T, especially while driving. There are definately stability issues with the OS, Safari will randomly decide when to un-cache the pages you have saved, and the camera is just plain awful (hopefully the new one will be slightly better though I doubt they’ll add a flash).

But the UI is so good I can overlook those things. I spend more time texting and emailing then I do making calls, so I can live with the less then stellar call quality.

Normally, I hate the look of blackberries. This one is nice.

I have no idea about the interaction of any of these phones.

One of my partner’s has a Blackberry. Like most BB owners he finds it a blessing and a curse. I am definitely not convinced I want to have “easy” email on my phone.

What I want with my phone:

Things that are somewhere between nice to have and annoyances:

I guess I still want a PFP (Plain effin’ Phone), but with wifi/voip capabilities.

Is it the Benq e55 you’re referring to?

Looking at the Nokia N95…I looked at this phone. I am pretty convinced I am not a slider user. I am a candy bar phone person.

That, and it sounds like it is more of a media device, when I am looking more for a phone.

I think I actually played with this one over at my friends house the other day and wasn’t particularly impressed. His teenaged boy loved it though.

After a few monthe with the iPhone this is what I have concluded:

IT IS the best singular device to combine all these things
IT DOES have the best interface and interaction design (as a Black Berry user as well, don’t go there)

IT DOES do all of these things pretty effortlessly and with huge style points both from a hardware and software perspective (the little microphone you squeeze to advance songs/answer calls, very cool)

My advice, wait for the G3 iPhone. I understand the designer desire to be different, and you will be from most of the public. 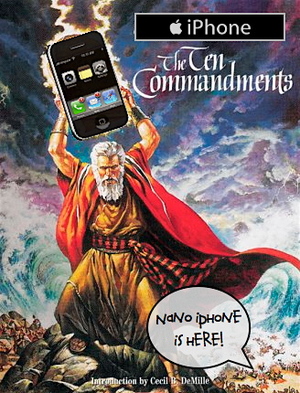 These issues are my beef with ALL of the current devices that are “integrated” devices. They do everything “ok”.

Part of my problem is that I had my phone stolen over the weekend and I am currently using a loaner Nokia N91 that makes me want to spoon my eyes out: 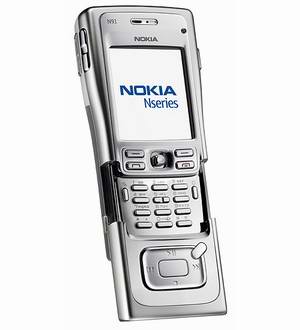 EDIT: NOTE to self…never…ever…ever…design a cell phone made out of stainless steel. I am going to walk with a limp the rest of my life carrying this thing around.

The Iphone will win a lot of points in my book as well once they sucessfully integrate exchange email capability. Thats the one big standout thats kept it from being enterprise friendly in the past and is the one thing I wish mine could do right now.

The future software updates and SDK will also mean that there could be a lot of cool additional software coming out for it. I really hope some work has been done on the antennas to improve the phone performance. I know the phone is slated to include a GPS antenna, which leads me to believe the other antennas will have been rethought as well.

dont laugh, i bought a cricket…its just A PHONE…

Sound, great, ease of use (even at night or with out reading glasses) great, and durable too…if you truly want to be designer “different” thats the one.

I suggest checking out whatever sony ericson has out, I am definately a fan.

another thing I’ve done, is to shop for the phone on amazon.com. regardless of whether you need to save money or not, theres no reason to just be throwing it out. I got my phone when it wasnt even available yet from cingular for free because amazon has pretty good deals on phones from most providers. a few weeks later, my girlfriend got paid 100 bucks to get the same phone through amazon. I guess she just got lucky and caught more of the rebates. just something to consider.

got an iphone now and love it. haven’t had any issue with the call quality (aside from the odd time pressing the mute button with my face), and the UI is certainly top notch with an overall great user experience for with integrated surfing, email, maps, etc. i dont think i could ever go back. thing is, i actually looked around for an alternative to the iphone before I got it (i like to try to avoid the sheep mentality, if possible), but nothing matched it in terms of design, feel, quality, UI, etc.

previously I had the samsung X828 (think the number is different in the US).

was great for just a phone being a phone, and the thinnest phone on the market (cant stand to carry a brick, and most flip ones certainly qualify). good call quality, ease to use UI (had a sony ericsson once and threw it a wall because the UI was so slow/annoying), good camera/video, and generally very happy with it. Only moved on as I fell asleep with it in my pocket and kinda broke it in half (after 1.5 of use, it’s still pretty durable and still working though). I’m back using it again while the iphone is in the shop, and dont mind it, but do miss waking up and surfin the net from bed, or while atching TV on commercial breaks via wifi on the iphone.

I havent used any of the other samsungs (most arent available in Canada), but ive seen on the interwebs a few other models that also look pretty sweet, and IMHO samsung is the new sony. Have a samsung digicam and plasma tv and the design/quality of all is very solid. LG also looks as though it has some nice new touchsceen iphone-ish models…

while the iphone is in the shop,

Hrrrmmmm…you’re not selling me here

while the iphone is in the shop,

Hrrrmmmm…you’re not selling me here

busted mechanical switch. It was stiff when i got it so think its just a manufacturing defect. I know lots of people with iphones, none broken, so wouldn’t be too concerned. Good warranty service though (although had to send it to a friend in the US to repair, no support for Canada yet, but the iphone is coming to Rogers “soon” apparently.).

If it’s any consolation my friend’s Iphone stopped working correctly (after using a no-name car charging accessory) and he took it to Apple and got a new one no questions asked - same day. 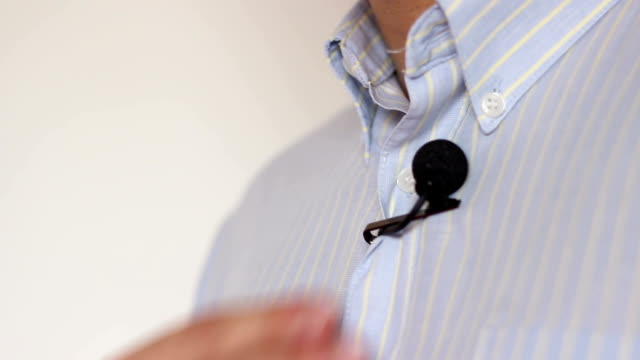 The 10 Best Lavalier Microphone Picks for Any Mobile Devices

Lavalier microphone options for clear and dynamic recording quality. Get a professional sound with your mobile phone through these top picks.

i’ve been thinking about this one after being annoyed with my smart phone and realizing like zippy that all i really want is a phone. web is only a reason for cell providers to charge you for data plan and become obsessed with constantly being connected. I’ve been trying to disconnect myself more lately. technology is too cumbersome.

The motofone is pretty trick. Besides E-ink displays are way cooler than that multi touch jazz.

Ya, the motofone is a possibility. The more I think about it, the less I am like Asango that I don’t want to be connected all the time.

I had a Motorola L2 and I loved it for the fact that it was a PFP. It didn’t drop calls, it didn’t try to do anything more than it need to do. The OS was a pain in the ass…but it functioned.

If I could get an equivalent to the L2 that is a thin phone with JUST wifi, I would be a very very happy boy…but I am not holding my breath on that one!