I took my son to see the LEGO movie Saturday - it was (no joke) one of the best movies I’ve ever seen. If you played with Legos as a kid, this movie will take you back there and immerse you in them again - but then it also added the wit and humor we expect from kids movies (to keep us adults from going bonkers while watching them) as well as featuring some characters you would not expect to see. It’s clear that DC comics was involved (because they could use the cash infusion) but Marvel was not (as they, of course, do not need the cash!). A surprise cameo of Star Wars characters was very cool. 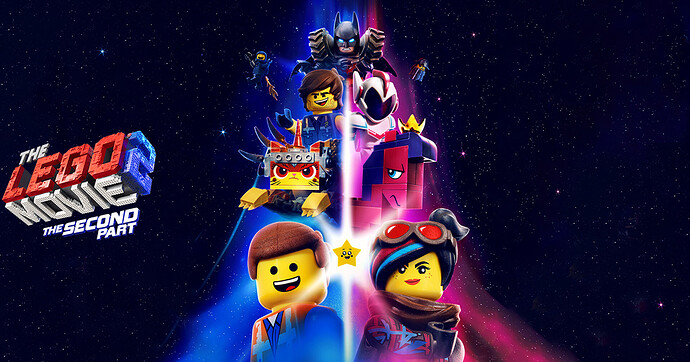 The LEGO Movie 2: The Second Part - They Come in Pieces. Available Now On Blu-Ray™ And Digital.

The action treatments were brilliant, everything was Lego, including explosions and ocean waves made of ever-shifting Lego formations. The larger story canvassing the intimate story was well done too, a must see if you like Legos!

I would say go beyond that to say that this is a must-see for anyone that’s just a fan of pop culture and movies in general. It is chock full of allusions and wit that had me laughing out loud for the majority of the movie. Sure I loved LEGOs as a kid, and seeing that wold realized was amazing. I think that charm, though, would have quickly worn off had it not been for the incredibly smart, funny script, and I don’t think I’ve seen a more purely enjoyable movie since the last Toy Story. Go see this movie.

Thanks for the recommendation. The preview looked very good and I was between this or Robocop in the near future (this is probably the much better movie).

I agree, the Lego Movie was one of the best movies I have ever seen in the past two years. I went with a fairly large group of friends. But the people who liked it and didn’t like it was pretty even. Half of the group didn’t like it, hated it, nearly all of them fell asleep. Everyone else who liked it, loved it.

I did enjoy Robocop, Lego movie is on my to do list.

Ringing endorsements - I definitely want to see it.

Ringing endorsements - I definitely want to see it.

No, I’ve got to believe it was all computer generated, but extremely accurate nonetheless (all the way down to slightly mashed corners, scratches and discolorations on the various blocks).

Thanks for the recommendation. The previews looked a bit cheesy in terms of dialogue, but now I’ll go see it for sure. Or maybe I’ll wait for the DVD version and watch it on my tv although it seems that it would be worth seeing the 3D version.

I’m thinking of skipping Robocop as I never even liked it all that much, I’m more looking forward to Her, which comes out in a week here in the Netherlands.

Just saw it with my 5 year old son. He’s already got half the characters built.

The movie was great. I loved watching the background for all the little details and nuances. So good.

I got my first Lego set in 1976, a general-build kit packaged very nicely with some ideas of things to build on the front box cover. The box lid flipped open to reveal a vac-formed clear lid over the (somehow) categorized pieces.

I’m pretty sure that Good Cop/Bad Cop’s parents house, in the Lego movie, was one of those box cover ideas, I’m almost sure of it.

There are so many easter-eggs and wink-winks to Lego enthusiasts of all stripes (including a pretty funny dig at Fabuland) that the film plot is almost secondary to looking for all the details. Like when Classic Space Guy (who was blue, which wasn’t exactly classic) builds a spaceship, it says ‘LL 928’ down the side on that 1x4 block. I nearly wept.

When this movie comes out on DVD/iTunes etc I am going to watch it again and again. Its so great.

The story behind Animal Logic's incredible realization of the brick world in The LEGO Movie.

Classic Space Guy’s broken helmet got me. I’m positive every space guy I had broke at that exact point. Amazing.

I loved the fingerprint on the main character…who ever thought of adding that detail must have been as ocd as me!

Classic Space Guy’s broken helmet got me. I’m positive every space guy I had broke at that exact point. Amazing.

I’m pretty sure that’s an ID introduction to weld lines.

No, I’ve got to believe it was all computer generated, but extremely accurate nonetheless (all the way down to slightly mashed corners, scratches and discolorations on the various blocks).

Thanks for the link! Super awesome.