Kicking this off people, lets represent, I’ll be there in a few weeks.

You have free museum days once a month too.

Enjoy one of the most diverse cities in the world. =)

TONIGHT… July 9th at Yerba Buena the TechnoCRAFT show curated by Yves Behar opening from 8 till 11!

I’m on my way now. Anyone going?

Turn out on Friday night for the TechnoCRAFT show was pretty awesome. the show in general was really well done, with a lot of great stuff… good to see so many folks from frog design there. 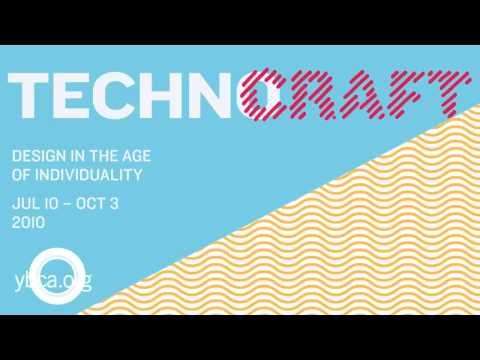 The opening had drinks, a rock band, plenty of objects to actually see in person, interactive fun stuff, and I’d say in the neighborhood of 400 people. Doors opened at 8, I showed up around 8:45 and there was a line snaking around the corner… it seems like more design events should be this fun.

A bunch of iPhone pics, sorry, forgot the camera: 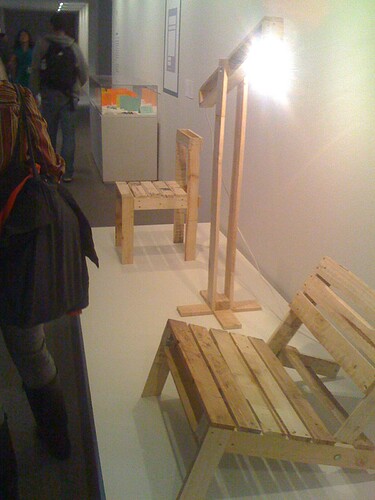 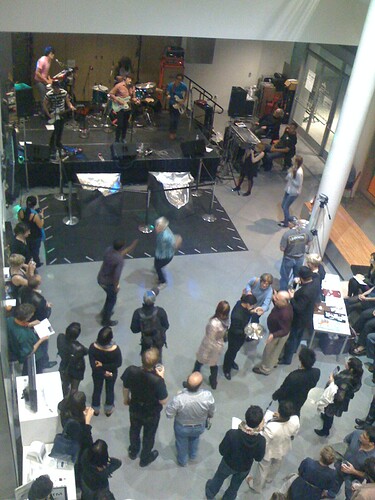 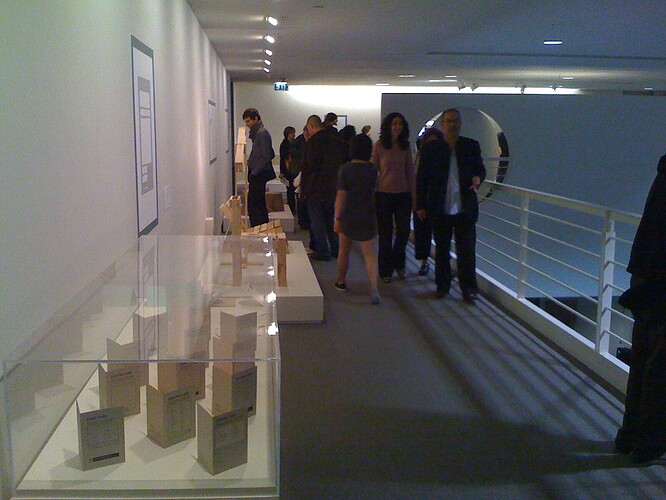 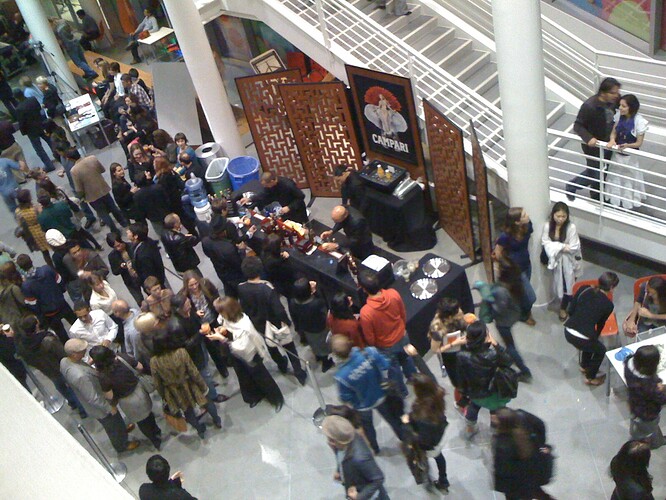 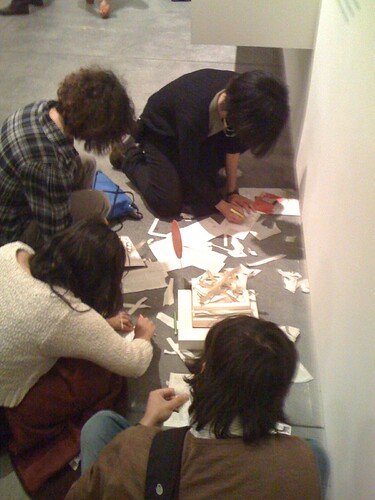 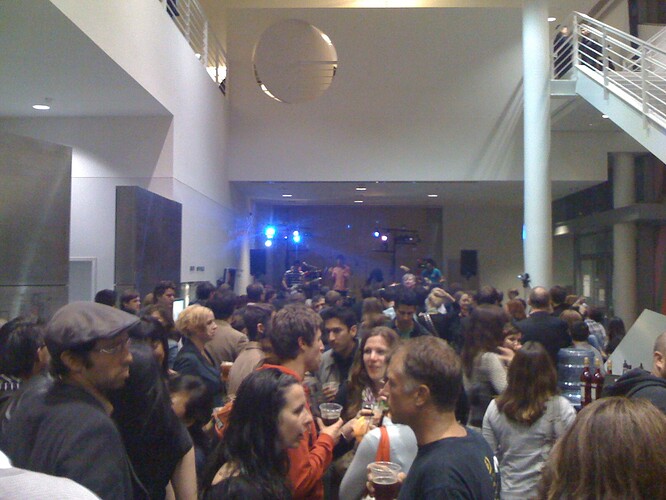 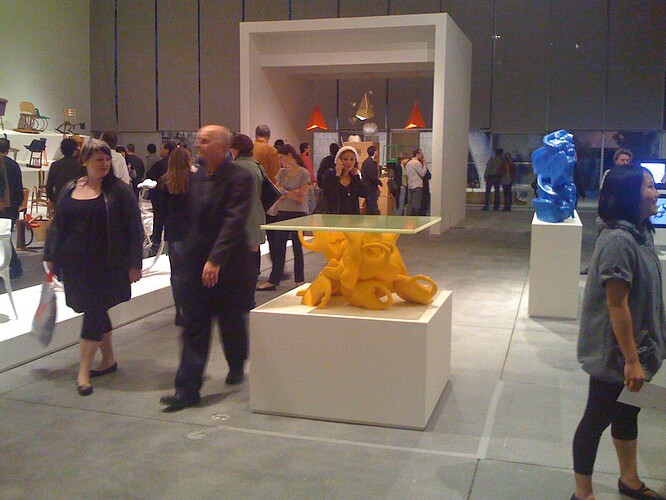 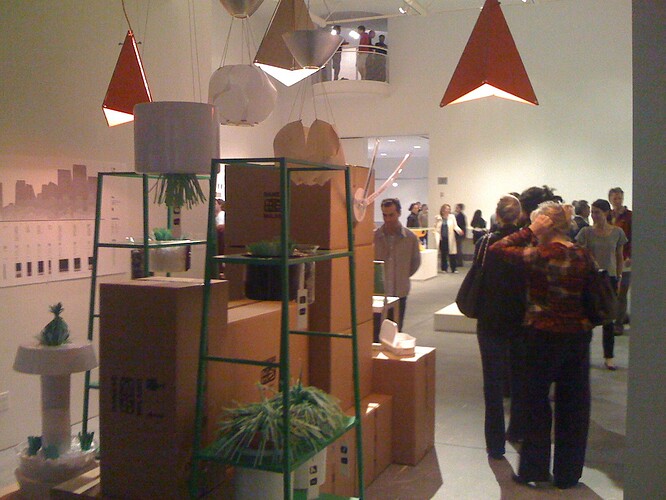 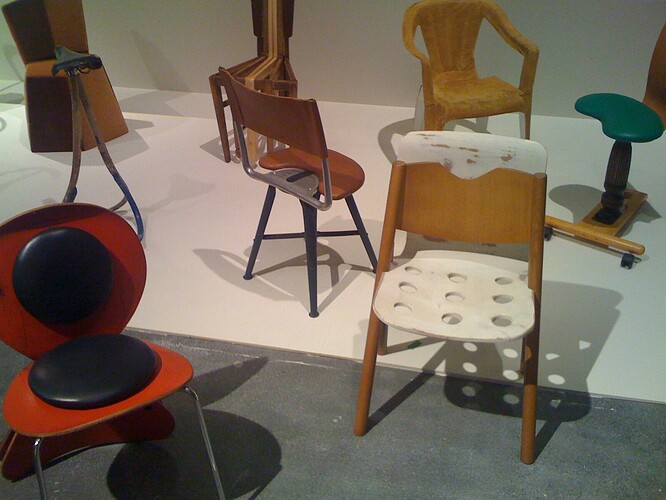 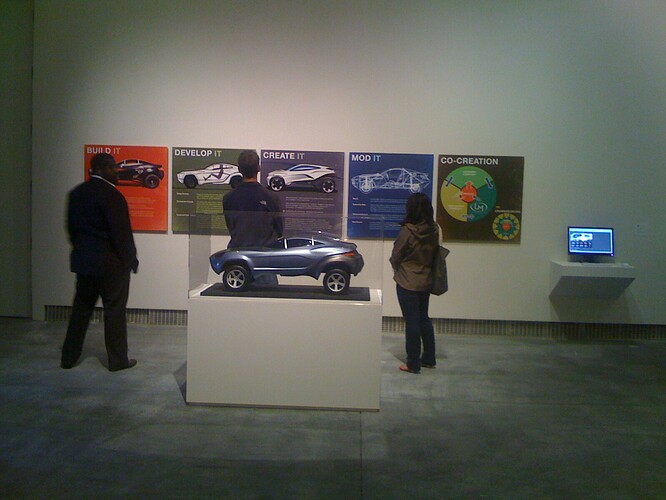 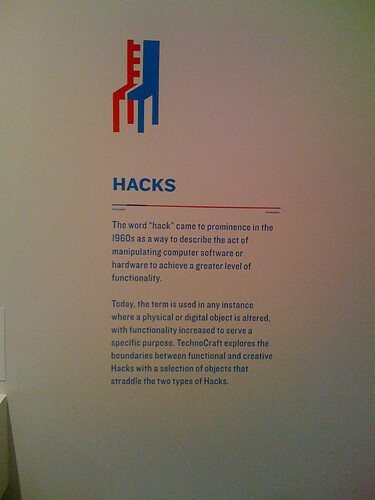 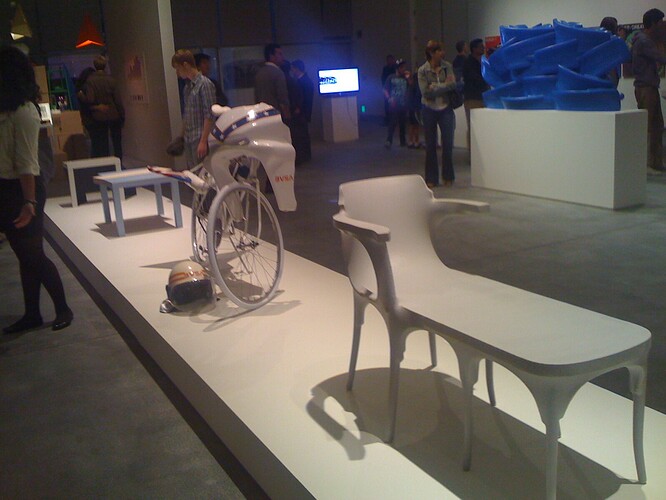 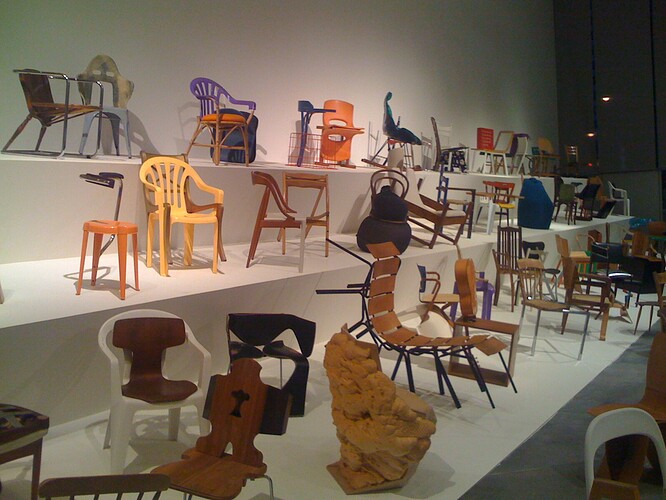 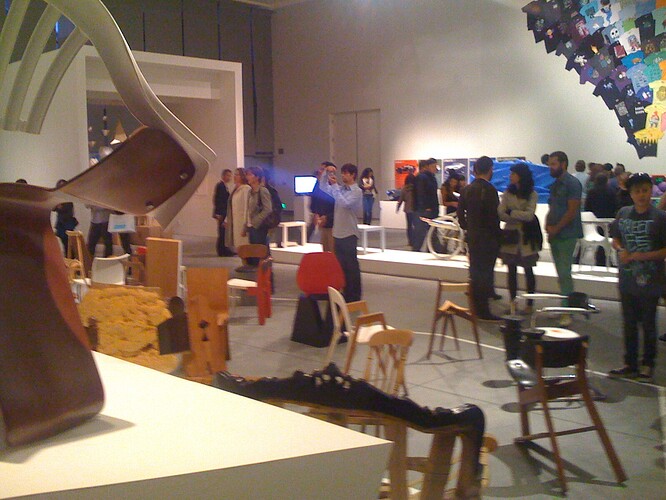 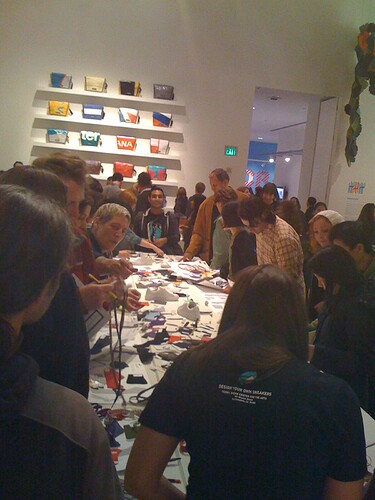 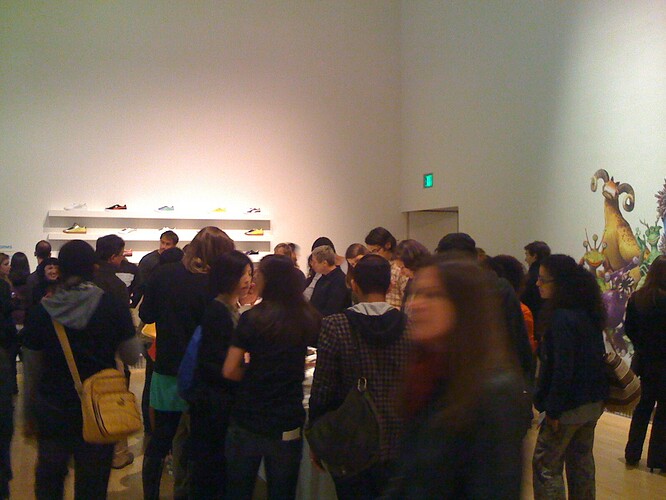 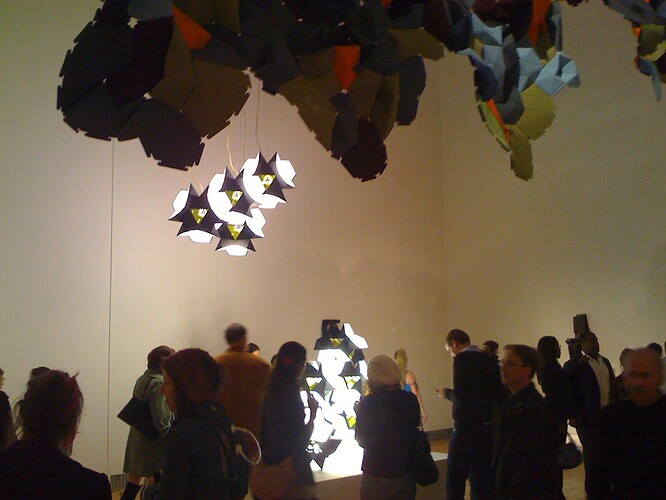 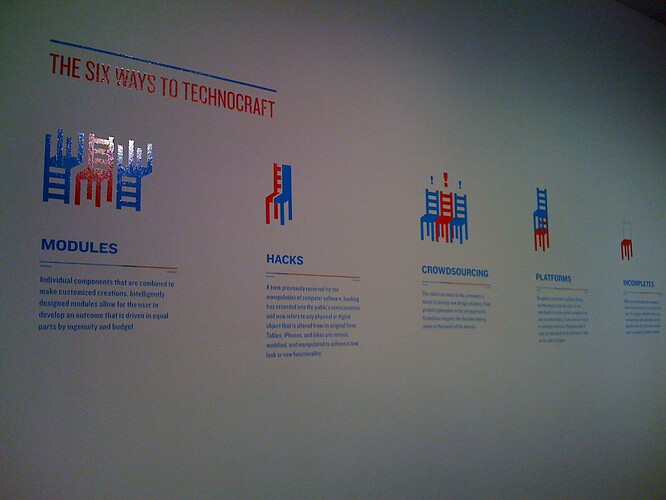 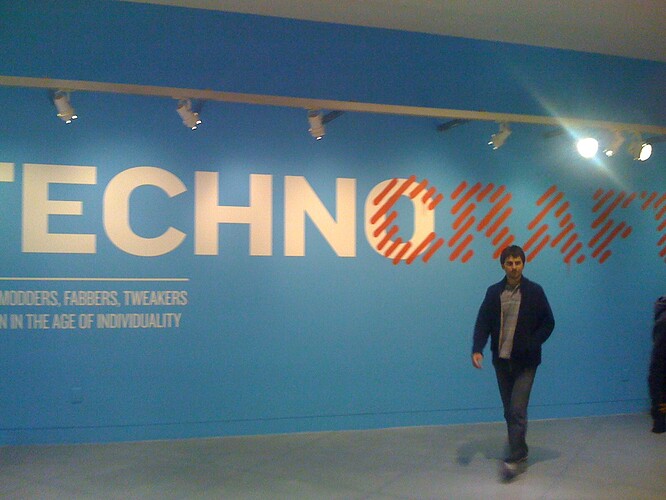 Cheers for the pics yo,

I dont suppose you know of any events in early August around the San Fran area? Im transferring over to SJSU from New Zealand and am having a week in SF, and would be keen to check out some of the local design scene!

New Zealand to San Jose! Wow, that is a big move. Best of luck at the new school. I don’t know of anything yet, but I’m sure something will pop up. I will post if I find anything.

Well it’s not exactly a design event, but SF Outside Lands is happening August 14-15! It’s a really awesome concert/wine/art series with a great music line-up this year.

Outside Lands is a 3-Day Festival celebrating music, food, wine, beer, art, cannabis, and everything we love about the Bay Area.

It’s also a great chance to visit the various museums around that area.

Wow, looks awesome! May have to get tickets for that, thanks very much

This is late August, looks good:

Wow, that’s a lot of people at that Technocraft opening! Bummed I missed it, but YBCA always puts on great events. Thanks for sharing those pics yo. Was Yves there and did he have a talk or anything?

As far other happenings in the City:
The Museum of Craft + Design,

1st Tuesday of the month is free at SF MOMA and there’s the Fisher Collection Exhibition going on there right now,

1st Thursday is when the art galleries stay open late and many have artist exhibit openings (http://www.firstthursdayart.com/),

1st Thursday at the Exploratorium is this event called After Dark (http://exploratorium.us/afterdark/) I haven’t been to any of these yet.

There’s also a few Meetup “design” groups in the area you can check out if you want: 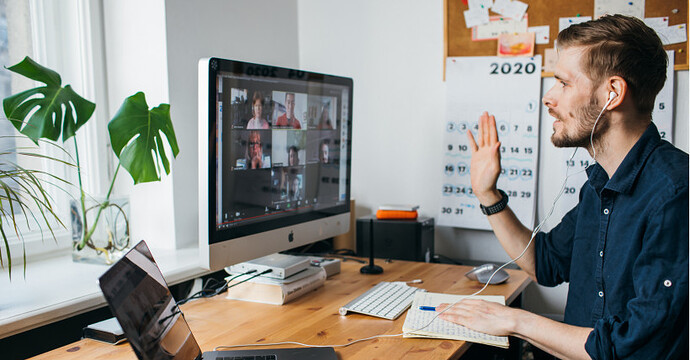 Find Meetup events and groups so you can do more of what matters to you and meet people near you who share your interests.

Wasn’t there a third thirsty Thursdays at Smart Design?.. I always used to get the emails

There’s an SF ID mailing list for cycling missions on the weekends too, but there’s some Dakar Motorcycle rally guys that go out - Always thought it’d be way too hardcore for me!

cool, thanks for the tips all!

Just got this email:

3rd Friday is a collective gathering held on the 3rd Friday of every month. It’s a chance to get to know each other and build our creative community here in the bay area. It’s an opportunity to make new friends, and to keep inspired. It’s your community – make the most of it.

We hope to see you there.

3rd Friday is a collective gathering held on the 3rd Friday of every month. It’s a chance to get to know each other and build our creative community here in the bay area. It’s an opportunity to make new friends, and to keep inspired. It’s your community – make the most of it.
Friday July 16th 6:30pm at:

Do you have any more info on this? I can’t seem to find much if anything.

Another small thing to check out is the Autodesk Gallery at 1 Market:

In this talk Jesse Schell explores the social, cognitive, and technological trends in computer game design and use.

Charged up about plug-in hybrid and electric vehicles? Curious to learn more and check them out yourself? As major automakers announce plans to bring these vehicles to market, get your own first-hand look at a variety of cleaner and greener cars that can lower fuel costs, greenhouse gas emissions and our dependence on oil.

Preview the very latest vehicles and other plug-in technology innovations, including the EV charger frog designed for ECOtality, at the Plug-In 2010 Public Night, and then take part in a panel discussion about your role in bringing plug-ins to market.

Tickets can be purchased at the door for $10. For more information on Plug-In 2010 and to view our list of exhibitors, visit www.plugin2010.com.

this one is today: 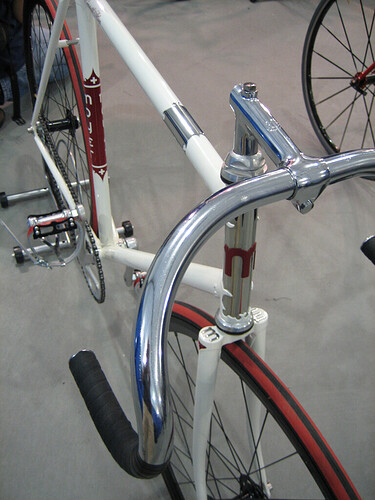 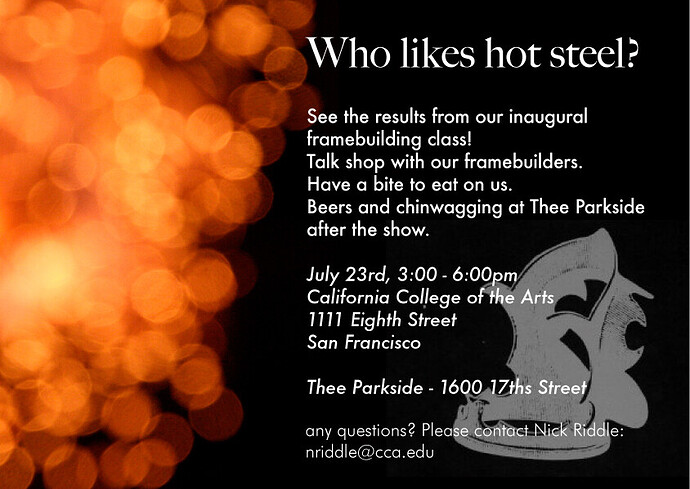