Kickstarter lessons from a designer (article).. 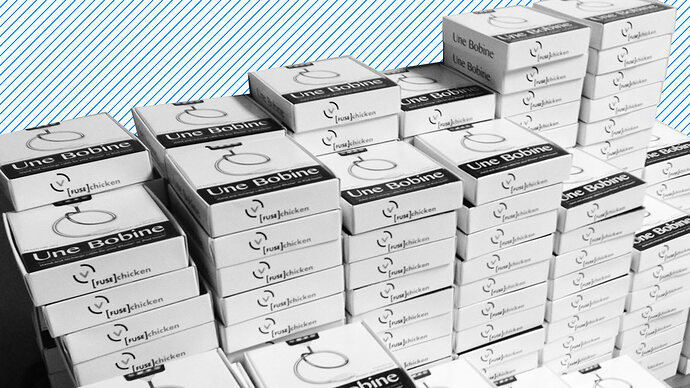 Life After Kickstarter: 5 Costly Lessons From A Kickstarter-Backed Designer

Great article with a ton of great tips. thanks for sharing

“That was kind of the eye-opener, where we said, ‘We need to find people who do this for a living,’” Fawcett says.

This right here needs to be read by designers claiming that “they will be doing all the work” when entering a partnership of a start-up.
Many designers seem to believe that once ONE product is finished (which is their ton of work), thousands will be magically sold everywhere immediately (which is another ton of work that is best done by someone with other type of skill and mindset than a designer). It is the second ton that brings in the ACTUAL reward, the first ton only brings a promise.

Not saying it can’t be done by the same person. In this story the whole thing was (supposedly) done by the designer. But I’ll just say that I think the product is kind of pointless and butt-ugly, so from my perspective Facett is better suited to be a supply-chain manager than a designer. No doubt he did more work on the second part than on the design.

Also, I hope he was making a point by mentioning Czechoslovakia (dissolved 20 years ago) and not being ignorant.

No mention of the negotiations and contracts with distributors.

No mention of the marketing/sales strategies.

No mention of secondary sources for manufacturing and logistics when the primary source goes belly up.

No mention of regulatory.

An idea is easy. Always has been. Always will be.

Really enjoyed this article and It’ll help me along the way in the future, thanks for posting!

Interesting. I’m curious how the “Kickstarter is not a store” part will turn out.

Totally agree with engio. I’ve never liked selling, so I’ve avoided starting something up on my own.

The whole Kickstarter trend really concerns me because I went through the whole process of finding an angel investment group to fund my upstart company. There is a huge difference between having a well-executed design and presentation and actually getting it to market. The amount of work necessary to just start a new business and manage it is insane.

The angel network that invested in my idea provided much more than just a big fat check. The members invested their time and resources, assisting and guiding me on everything. Had I only received the money, I can guarantee it would have never reached the market. You have to find a good manufacturer, have quality control, costs of development, testing, certifications, shipping logistics, tariff codes, etc. I could go on and on. And that’s just with the product itself. Then there are the insurance applications, taxes, patents, quarterly reports, etc. As a designer, it will drive you absolutely mad.

Once you are actually selling it, you have customer questions, dealer applications, credit-card transaction fees, etc.

The point I’m getting at is that these Kickstarter projects have not gone through the extensive amount of due-diligence that an angel network or private investor would. That’s done in order to see if the people involved in the project have the experience and means to actually get the product to market AND support it. And manage a company.

The angel network that invested in my idea provided much more than just a big fat check. The members invested their time and resources, assisting and guiding me on everything.

My dad made it abundantly clear to me when I was younger and full of vim’n’vigor, not to mention youthful exuberance and trusting naivete, that no one values your business as much as you do … having your angel, or any other, network with actual “skin in the game” (aka: money/initiative) is just about as close as you can get.

I just wonder how many KS project funds end up partied away?

I just wonder how many KS project funds end up partied away?

From what I can tell, a good amount. It seems a lot of Kickstarter projects grossly underestimate the amount of work adn time involved in manufacturing, distribution, and pretty much everything else after funding. And that is assuming their design doesn’t need to be redesigned for more realistic manufacturing, which is often times the case.

This is a great article. Number one is especially important. We get a lot of stuff from Kickstarter and the files are not even close to a manufacturable state. Also you are not going to get the design correct the first time around. Having at least started the prototyping processes is extremely important to get an idea of your tooling costs.

" In the end, the team spent nearly $50,000 on eight different injection molds for all the parts they needed."

Agree that it’s important to have at least a crude prototype for most projects. However, many of the projects shown on Kickstarter revolve around complex electronics that although CAN be made, it would take a huge sum of money to even get to a crude prototype. It would basically end up being nearly the cost of having it fully developed.

Case in point, the Hindsight 35 I came up with. Sure, I made some VERY crude prototypes but they didn’t represent how the final product would really function. How could I when it required custom software, custom electronic components, rare LCD screens, etc? For designs that don’t have custom electronics of any sort, it’s fairly easy to prototype using 3D-printing methods. In the end, I basically had to fork over a minimum of $250K to have a firm create the software and design the PCB. And that didn’t include tooling for the enclosure or manufacturing set-up and support, or testing and certification!