For all you freelances out there, where do you work from? Do you just use a spare bedroom or do you rent a space off-site? If so, what kind of environment is it? In a strip-mall in the 'burbs? In a loft in some trendy area of downtown?

I use a spare bedroom as the official office, but I find myself working all over the house (even outside). There’s too much overhead in an off-site office for me right now.

I live (and since I was layed off from my day job, now work exclusively) in a small neighborhood of a rural town. Some might call it the 'burbs, but its just a bit outside the typical commuting distance for the nearest metropolitan area.

I worked from home for about 3 years and although I loved it at first I found it very isolating. It really hit home when we had our second kid. Our bedroom is in the loft so when we moved him into his own bedroom we slept in the spareroom/office so we didn’t have to keep going up and down the stairs when he woke up.

It was when I realised I had spent literally 24hrs in the same room that I thought I better get out of the house. Listening to the newborn all day was no fun either.

I picked up a small office that I share with someone else who is rarely here. It’s nothing special by any means but it makes me feel part of society and it’s only 15 minutes from home.

I work from home, an open concept loft in downtown Toronto. The way I have the space organized, the TV is behind my head and facing the sofa, such that i know when I’m in “work mode” im facing one way, and when i’m in “play mode” I’m facing the other. I’t helps keep me focused. I also have a great vintage desk with a flip up compartment for hanging files that helps by covering the mess on my desk from the outside view, so i can concentrate on TV/other activities when not working.

The way my place is laid out, it actually works quite well for a studio and often bring clients in. It’s doesn’t have the feel of a “home-office” so stills works professionally. The bedroom is partitioned with a large sliding door that I use as a chalkboard and I can easily stow any personal mess in that space if clients are over. The pedestal dinning table also works well as a meeting table for small groups, and the kitchen island is handy to serve clients an espresso or layout large drawings.

For me, I figure my own space reflects my personality as a designer (ie. filled with books, vintage objects, etc.) so I don;t worry too much about the personal vs. professional as I know some at-home consultants do.

Here’s a few quick pics (note: normally the place is not this clean!). 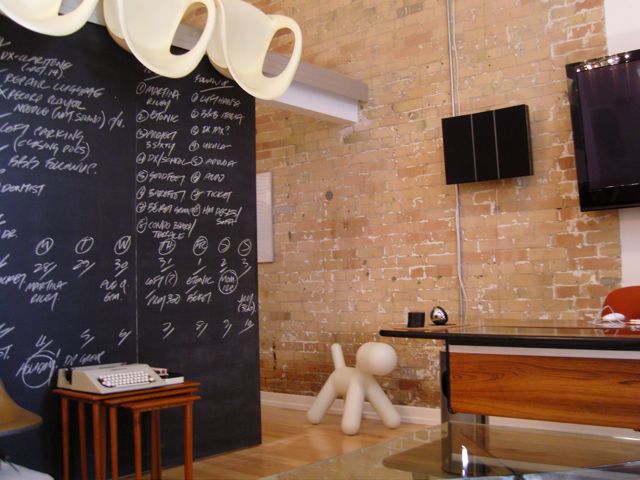 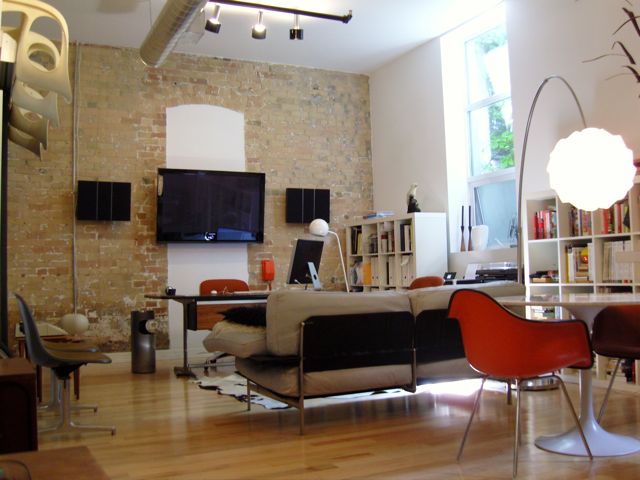 I love that room partition made of a sheet of slate, RK.


I too work from my home office/ dinning room.

I love that room partition made of a sheet of slate, RK.


I too work from my home office/ dinning room.

actually it’s a pretty standard hollow wood door, that i painted and sanded (6x!) with chalkboard paint from Home Depot. The result thought is great and I managed to get a similar smooth finish as a real chalkboard with all the wet sanding.

yeah, that’s a pretty slick place you have there Richard

I’d have a hell of a crooked neck looking round at that TV all day. I have a hard enough time concentrating as it is, never mind the lure of a big ass TV behind me!

I think it’s reading worse than it is. Kind of like a friend of yours calling you a jerk because you got the hot new lambo (that he could only dream about). I know my friends are like that, it’s not serious. Insults among friends brings ya closer (but doesn’t translate well online).

exactly! i apologize if i was a bit abrasive. i always thought that it would be kind of hoaky to bring your clients to your home office, but richard - you have proved me very wrong.

very nice, professional, elegant - and your workspace seems to depict a lot about you as a designer. well organized and thought out.

its making me second guess my layout

Thanks, lets keep it professionally casual.

Anybody else going to post their space. I’m curious to see more! I know Richard set the bar high!

Richard, nice space, is that an action office desk? We’re building some big sliding doors in my studio that we were going to paint with chalkboard paint or use marker board, yours look great so you might have helped us make up our mind.

It looks like this, but instead of money it’s (organized) piles of paper. I have no money : (

exactly! i apologize if i was a bit abrasive. i always thought that it would be kind of hoaky to bring your clients to your home office, but richard - you have proved me very wrong.

very nice, professional, elegant - and your workspace seems to depict a lot about you as a designer. well organized and thought out.

its making me second guess my layout

glad you like… I don’t have client in my loft too often anyhow, but ya, it does kinda reflect my design personality and inspiration which I think the clients do like…

grimble- ya, it’s an action office desk. works great and even has built in hanging file storage!

really nice office Richard, something to work toward in my own workspace… Cheers!

It looks like this, but instead of money it’s (organized) piles of paper. I have no money : (

is that from the Ducktales NES game? That was a fun game, pogo cane!

Psshh, I’m not posting my space now. I work in a coal mine compared to R.

I had a nice studio room in Portland, but we had to downsize when we moved to Cambridge. For now I do a lot of work in the living room. 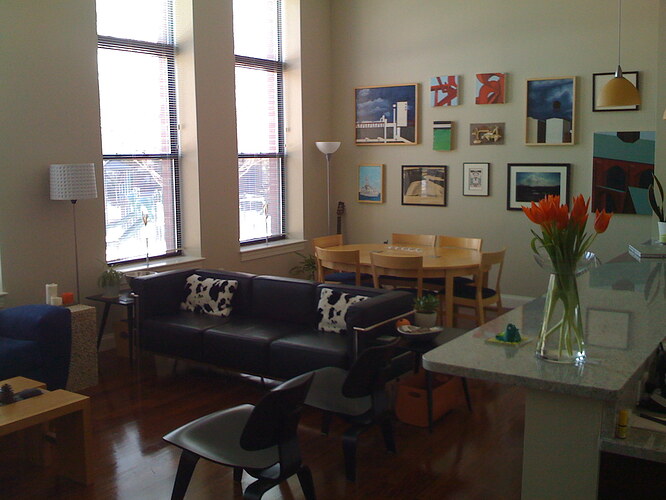