I guess I should step up to the plate…

This is something I worked on for a marketing agency who had Sony on their books. They wanted to bring Playstation into the mall environment making a retail/experiential kiosk that reflects the brand of the then new PS3.

I idea behind this was to really play on the sweet looking sweeping shiny black curve on the top of the PS3. Being a bit of a gamer myself (mainly FIFA Soccer) I had a lot of fun working on this. I also worked on some Sony Store stuff for the gaming area which they rolled into some stores up here in Canada. 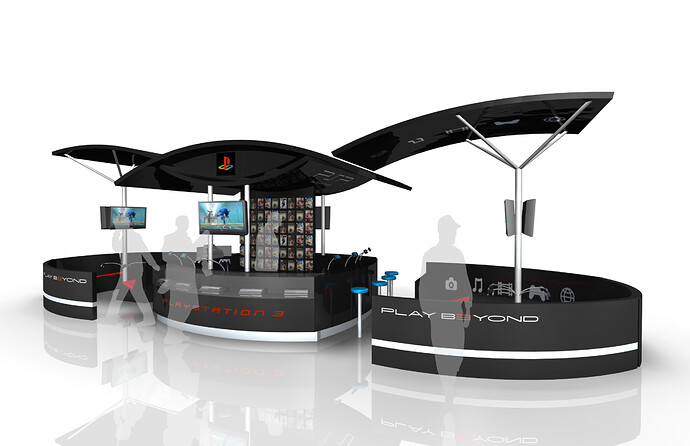 Does it have to be something that actually went into production or just a favorite design?

Does it have to be something that actually went into production or just a favorite design?

I guess I should step up to the plate…

This is something I worked on for a marketing agency who had Sony on their books. They wanted to bring Playstation into the mall environment making a retail/experiential kiosk that reflects the brand of the then new PS3.

I idea behind this was to really play on the sweet looking sweeping shiny black curve on the top of the PS3. Being a bit of a gamer myself (mainly FIFA Soccer) I had a lot of fun working on this. I also worked on some Sony Store stuff for the gaming area which they rolled into some stores up here in Canada.

That is pretty sweet. I will have to dig some stuff up. A lot of my work has not yet gone to market sense I work in the seasonal group we tend to work 2-3 years out. I will find some stuff and post later.

Here is some work from my early years at Mars. The first is a Round gifting tin that was sold with personalized M&M’s on our My M&M’s website. We have some really great stuff coming out this christmas. I will not be able to post until then. 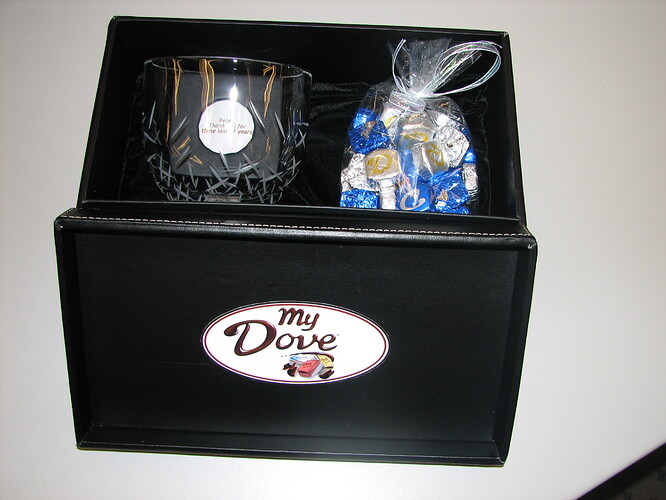 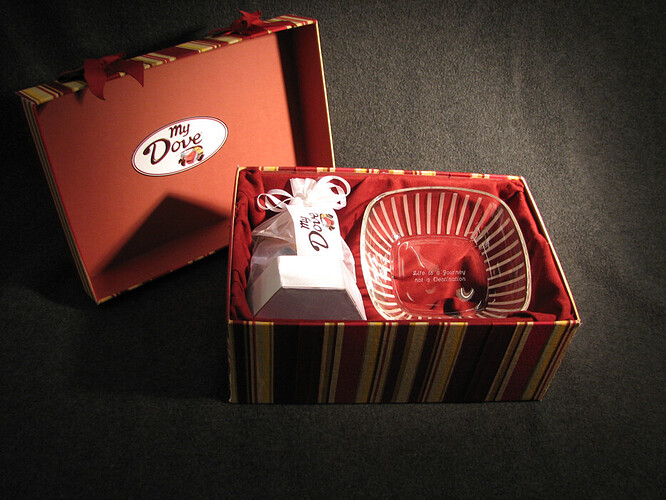 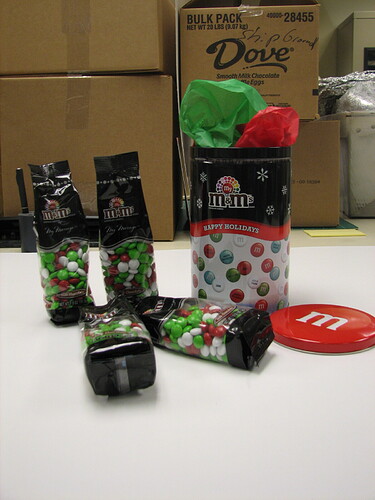 Funny you work for Mars, I used to do a bit of work for Effem up here in Canada. But as my contact moved onto greener pastures I haven’t worked with them since. I imagine everyone and their grandmother is knocking on their door for work.

it’s been quite a few years since i worked on these permanent packaging and display designs for high end shears (most of my work ever since is consumer product), so here they are.

the idea behind this first one was to create a permanent packaging solution for a range of different high end hair dressing shears. i developed this when i was working for a company back in the s.f. east bay, it was developed for an outside client. my boss at the time was a really cool young guy who gave the designers free rein to come up with all kinds of ideas to hold and present hair dressing shears. although he was the c.e.o., he would roll up his sleeves and get involved with making all kinds of quick prototypes for products and packaging, fostering a very forward and optimistic ‘can do’ attitude among the teams there. i remember doing a lot of sketches and prototypes for this, some of which were shown to the client along with some 3d model renderings, they bought into it, even though the molding of this was very expensive (over molded TPR on acrylic), it paid off in the end, this packaging design helped boost market awareness and sales of the shears. the innovative part was that the shear mounting mechanism inside can support a wide range of shear styles. unfortunately, i can not show the sketches and models in the process, obviously they are the intellectual property of the company i worked for. 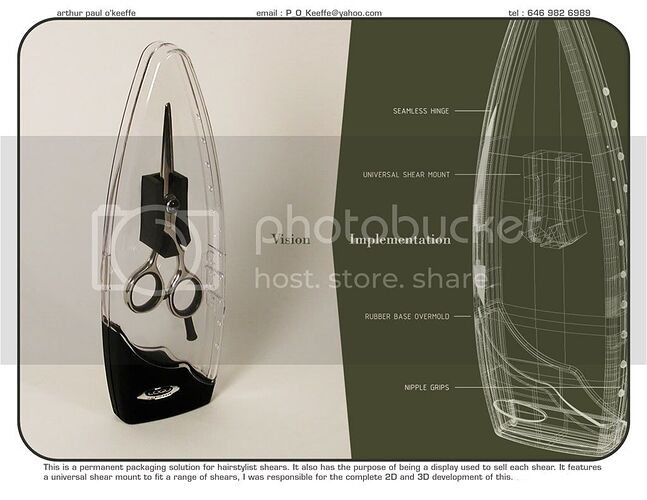 this other shear packaging and display was also developed to hold a single pair of shears. i developed this under the guidance of the industrial design director at the time, it also sold quite well and picked up a packaging design award along the way. 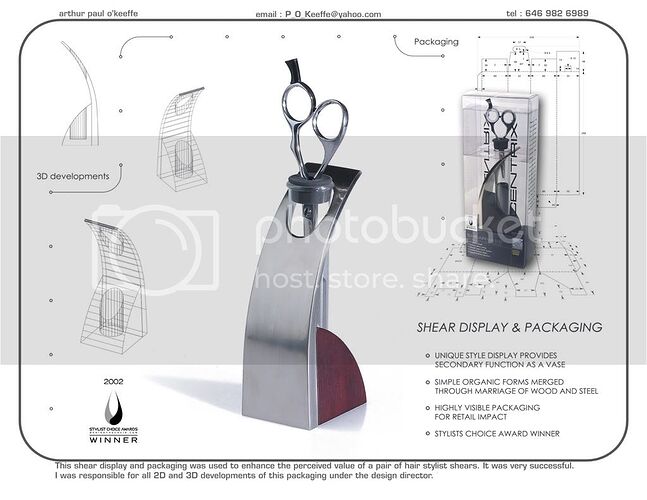 i miss working on these packaging and displays projects, sometimes p.o.p. can allow for a lot more conceptualization and innovation than some other areas of product design which i can often be governed by tighter engineering constraints or over interaction with complex teams shrouded in bureaucracy.

The tapper on the right is one that I really wish would have been put into production. It will always be one of my favorite designs that I did. 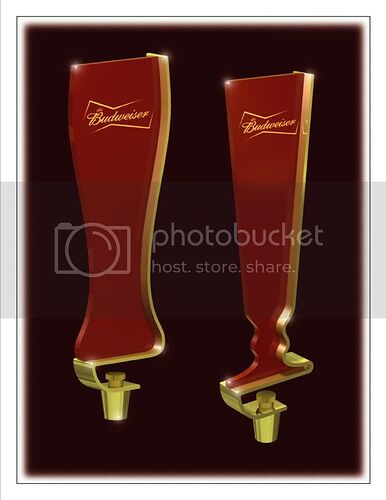 I also Loved this one…and it actually DID get produced. I had one hanging in my living room for a while - it would light up the place as though it were daylight. Freaking awesome! 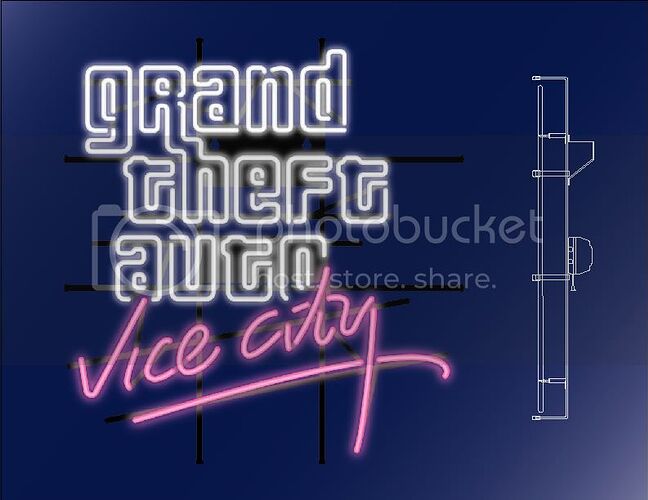 The link that you used is for download not display. You could upload it to imageshack our attach it to the post.

Hey everyone. Checking in from Cannoville UT on a slot cannon hiking trip. I am supposed to be ruffing it, but could not help but check on this Forum.

Funny you work for Mars, I used to do a bit of work for Effem up here in Canada. But as my contact moved onto greener pastures I haven’t worked with them since. I imagine everyone and their grandmother is knocking on their door for work.

That is great to hear. I have worked a bit with the guys in Canada but not a lot as they are their own separate Business unit from the US. We do tend to get a lot of people knocking on our door and it is hard to get in, and once you do we can be very demanding.

I agree with Loafer here. If we want this forum to last we have to start putting some stuff up and letting the readers see how what we do effects the ID community. We created this for all you Merchandising and Branding people out there so lets see what you’ve got. Even if its old, put it up and let’s get this baby rolling.

Great stuff from everyone thus far. Here is the brand new Nautica display program for their timepieces that will roll out internationally end of Q3 and domestically Q1 2010. Taking cues from Nautica’s new creative director Chris Cox and the direction he’s taking the brand I designed to program to be very light, airy and have some movement. It’s also completely modular as every piece can pretty much fit into every stand/base. 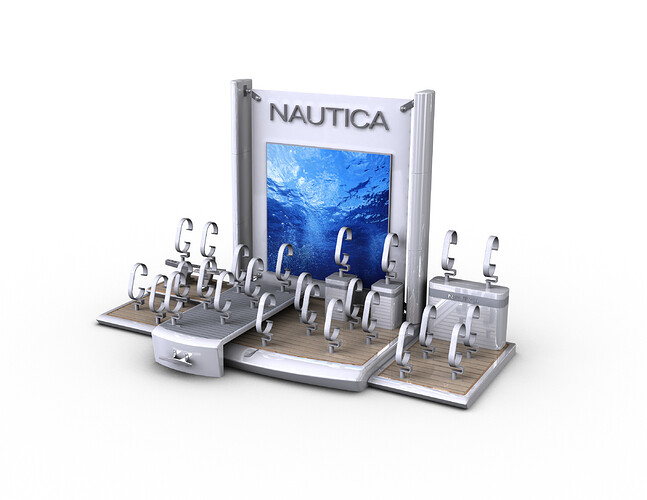 All good stuff…but we need more

GKaye, that’s a slick looking unit. It leads me onto another important question too, what 3D program do most people use in this industry.

I am a FormZ aficionado and like the industry it’s not regarded as being up there with the rest of the industrial design software packages, but I think that’s a whole other thread.

I just got in on the red-eye from out west so my head is still mushy.

Thanks Loafer. That’s actually just one of the prepacks, the program has a bunch more pieces. The first real program that I had full control over.

Here is an older piece I did a few years ago. I really enjoyed this project all around and not just for the package itself. The people I worked with were pretty laid back and most people within my company loved the concept. It however got canned because the gluing guy at the time in one of our converting plants couldn’t figure out how to get it to glue on our machines. 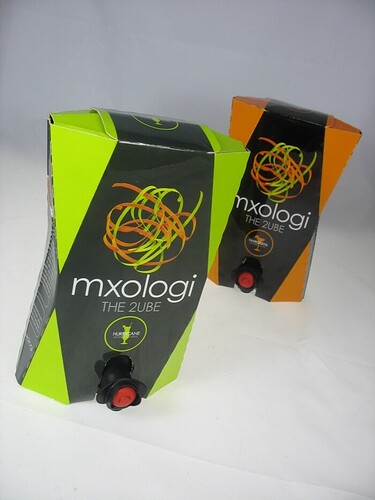 There are more projects I’m really happy with but they have to deal with innovation management and design strategy. Not much to show there but I could talk your ear off about it.

I love the logo too, very cool.
Which brings me to ask, as a package designer (this is directed at you too PackageID) how is the work flow between yourselves and the graphic design team ?

Do you guys come up with the form and then pass off the dielines for them to work around or do they have graphics in mind that you then use as a basis for your design or do you just do it all yourselves, graphics and form ? just curious.

The short answer is yes…

We generally work with a lot of graphic firms because we do not have an in house graphics group. For our core brands during development we will design a form and design “concept” graphics for that form These graphics normally will be the rough general idea of what we are thinking and in a lot of cases will be very close to what actually gets produced. Marketing are the keepers of the graphics in our organization which in my opinion is very dangerous but it has been that way for years.

For seasonal it is a bit different. We still work with the same process but a lot of development is done in house. The concept graphics we do are generally closer to the actual production work and we oversee and approve what hits the shelves. The amount of activities are much higher so there is not as much time to go back and forth with graphic changes.

From what I have seen the is the way a lot of big CPG companies work. Anyone out there work differently.

I will tend to do graphic studies though. Wether it be pushing our branding through creating graphics that may be a bit outside our confort zone or even doing studies of other brands graphics and how we can be influanced by them.

I work in Exhibit, Graphic, Environmental, and Industrial design within 1 role, I have favorites from all of those categories, but i’ll post one of favorite Exhibit designs. Small project, but it was a lot of fun because the client was laid back and able to communicate her criteria very well. Maybe i’ll post some others… 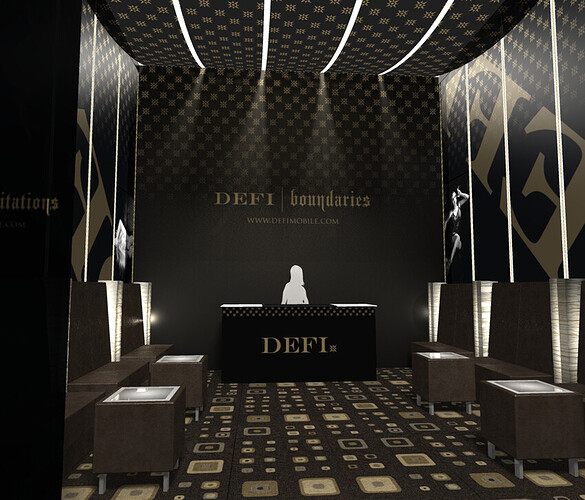 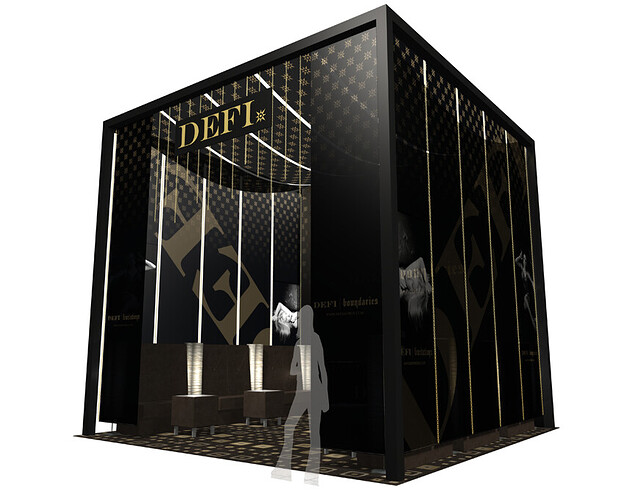 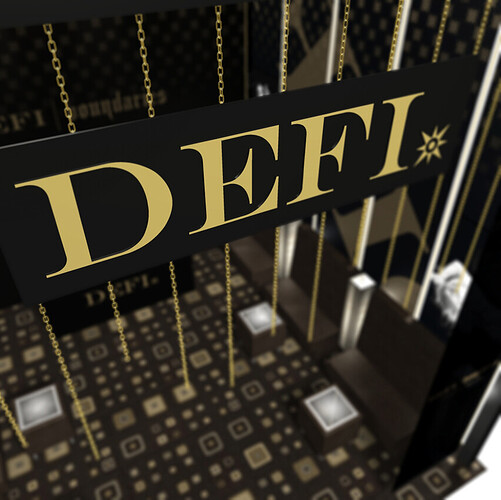 Nice work!!! I like the geometric patterns. What kind of product/company was this for?