I’ve followed the projects of R.Q Riley’s company for a number of years.
http://www.rqriley.com/

The XR3 Hybrid (diesel-electric) is his most recent, and in my opinion, best effort to date. You may be familiar with it from Jalopnik.com

The diesel part is a 23hp Kubota industrial power plant (spelled cheap), the electric part is mounted ahead of the swing arm; the two systems are independent of each other. If you don’t want to mess with the electrics don’t install them and just run on the ICE, and vice-versa. At 1,300 pounds it’s bound to scoot along pretty well. 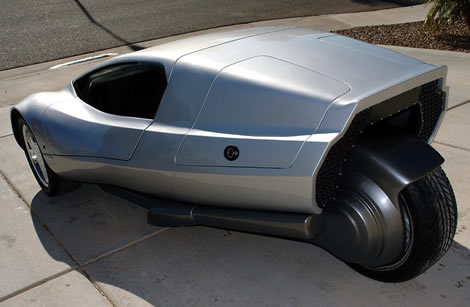 The prototype is on the street, and build plans are now available … paper plans; $200. On CD (with Solidworks models), $99. Kits are planned.

Mommy, I know what I want in my stocking for Christmas.

How come all the one-man garage cars look like 1960’s concept cars minus the graceful proportions and refined details?