I ask because because when I first saw it on paper I thought it was a stupid idea and almost immediately took a dislike to it. But whenever I see one of these things passing me on the road I somehow cant take my eyes off it! Ok - the front end styling isn’t anything to write home about and the side profile doesn’t particularly do it for me either, but I think there’s something wonderfully meaty about its oversize hybrid / sporty proportions at the rear. (especially when viewed from a low angle - like in a normal car )

So in brief (and from a styling point of view) - I wanted to hate it, but it seems I love it.

Has anyone else experienced this I wonder? 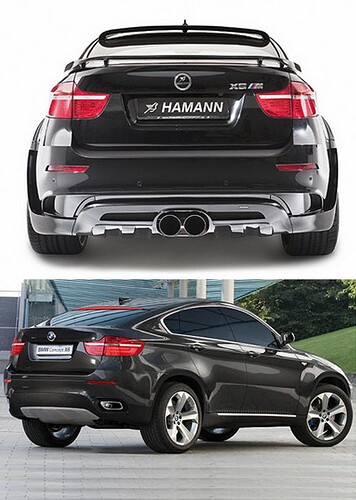 Wallflower: I have not. I understand it though. It’s impressive looking. However, I just can’t get over how useless it is. It’s kinda like the 1992 Camaro my mom had. 16 feet of hood hiding a 2.8L six. Then you get into this enormous car to discover an interior about the size of a Hyundai Accent (only smaller). The X6 is massive enough to contain a basketball stadium, but inside is just a 5 series wagon. I can’t get by that to make an objective decision on style.

I agree with your assessment 914, but for some reason I really like these. They look great in person no matter how useless they are. It’s almost like a well executed Aztek… as strange as that may sound.

Nurb hit it on the head, I hated the Aztek. Thank god someone BMW came in and fixed that image. The X6 looks great, and I think has resolved many of the visual contradictions between luxury sport & sport utility. That being said, I am pretty disgusted on the whole by crossovers, and I don’t think luxury has anything to do with utility, at least not in the realm of automobiles.

The X6 is massive enough to contain a basketball stadium, but inside is just a 5 series wagon. I can’t get by that to make an objective decision on style.

5 series wagon has waaaaayy more room, is faster, and can drive up hills. All things that the X6 cannot do. I like how it looks and feels but if you watch the top gear assessment you will go running to Land Rover. - YouTube

I have to admit my view of the X6 did drop a bit after seeing that Top Gear segment. But, I still think it’s a cool vehicle. Completely inept and impractical, yes, but still cool.

Did you see the Charley Boorman/ Ewan McGregor motorcycle adventures? In “Long Way Round” a stock Mitsubishi Shogun/ Pajero takes the support crew from London to New York no problems at all- they even roll it and the “Road of Bones” in eastern Russia needs to be seen to be believed.

In the Dakar one, because Boorman is riding a BMW they use X5’s I think. A lot of the early part of the show is about how poor these are as support vehicles, how much work needs to go into them to refit them, and how many problems they have.

Like the X6, it looks great but is a bit of a toy- the sort of car rich parents give their children instead of love.

(“Long Way Round” is fantastic, if you need something to watch I highly recommend it)

(“Long Way Round” is fantastic, if you need something to watch I highly recommend it)

+1. They also had the Russian UAZ van as support, that some mongolian dude repaired with a bucket of nuts and bolts and a hand file. The whole road of bones segment was amazing TV.

On topic: there’s an amazing looking cherry metallic X6 that parks on my street… with a nice key scratch all the way front to back. The car sure sparks some emotions

So I’m not alone with my internal X6 conflict. I find it pretty intriguing that our sensibilities are offended and yet we cant deny it somehow still manages to have some appeal.

Perhaps the X6 sums up our often conflicted modern world in a funny way. (“we know we shouldn’t , yet we do!”)

i considered buying an x6. Did you know it only seats 4?? I bought an infiniti fx50S. 390hp, Its fast as hell(faster than a mustang GT) and has more useless gadgetry than anything else on the road. Really,it has 4 cameras for a surreal 360 view around the car. I love it