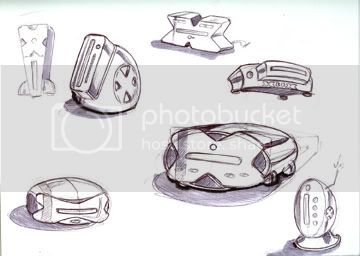 Thanks for setting up a sepate discussion cg.

Lets keep this one to the project at hand.

that’s great, do you have a sketch?

cg, good call on setting up some direction. its so important, most people just start sketching like a monkey. its nice to know what youre drawing and why. you dont see that too often, i like your thinking.

digitalvision, what kind of paper is that, and what white pencil/pen do you like to use for highlights? ive been thinking about going to a nonwhite paper for a while, but its slim pickings trying to find a good white instrument.

Your absolutely correct, setting up some parameters is essential. I’m sure that everyone that has put forth the effort to post a sketch has done that for themselves… but this IS a sketch forum, so bring it next time.

I’m more interested in seeing all of the people that bitched on and on about the design of thee x-box 360 for like 5 pages straight( New XBOX )… self included, put forth some effort and show their vision for the product.

Great design doesn’t allways follow consumer wants, for the presice reason that consumers usually don’t know what they want, they most likely can’t even articulate what they need. IMO good design delivers exactly what people are looking for in a nice wrapper, but Great design infers what people might need/want, makes an educated guess, and develops concepts based around that, to lead people somewhere new. Otherwise we’d all have AM transistor radios instead of 30 gig hard drives that hold podcasts.

To do this, sometimes it is best to just start sketching, to let the unconscious mind take over a bit and to work more at an intuitive level, so as a designer, you can push beyond the expected. There’s always time to fit stuff in later in the process. This thread is about the intitial gesture.

I know it’s a morgue in here but:

Would be curious to hear how your design is any more appropriate for the market for the X-Box than the 360 is?

It seems to me that the style you are presenting here follows a bit of the “superhero logo” look that the original X-box carried with it.

Although I tend to find the 360’s design to be off target as well, I don’t see this being any different.

I know, I know, buck up some sketches…

This is a sketch, not a final design. I think that, while the original was pretty hideous, the big x on the old unit was very iconic, and set it apart from the competition. I wanted to work that in, but in a new way while using some more contemporary materials and more of a housewares type of color pallette. With that x you can’t confuse it for Sony, Nintendo, or anything else, and I think MS has the earned the right to be proud of the business and platform they have built, instead of suffling it into annonimity.

But really, I don’t think this is about what the x-box SHOULD have been, i doubt a bunch of hacks screwing around will figure that out, but merely a bunch of people showing options for what it COULD have been…

maybe you could show us your thoughts in a visual form next time? Doesn’t have to be all rendered, just a doodle will do.

maybe you could show us your thoughts in a visual form next time? Doesn’t have to be all rendered, just a doodle will do.

Cool…that explains it. I was just curious as to what it was you were getting at. I like the “could be” analogy as opposed to a “should be” approach.

I agree, I need to buck up some thoughts on this…I am doing far to much “thinking” and not enough “doing”.

No one seems to take much interest in this but figured i would throw this in, just did it at the end of lunch. my first sketch, if i get time ill try to refine it with some detail and render. I haven’t owned a console since Genesis, but from what I feel, I see XBOX as the Big, beefy, mean system compared to sony, and nintendos systems. I wanted to give it a look as though it is a beast and has a set of balls with some exposed metal and guts. like it was just pulled from a wreck. i picture the x across the front still glowing, ready for more.

if anyone wants to render it go for it!

i obviously havent hit all of what my thoughts are in this sketch (big , beefy, etc), but its just an initial sketch to get some thought on paper…

OK this is ridiculous…

ridiculously sweet sketch. I like the tweaked perspective. Are you using any type of overlay?

I assume you’re using a ballpoint and then hit it with a sharpie?

Hey, thanks! They were fun to draw, but totally absurd!

I didn’t do any underlays for those guys, but I usually do at least one for “real” sketches.

These were done on a tablet PC (Toshiba m200) in Alias Sketchbook Pro. I use it for all of my product sketching, but usually do thumbnails & doodling in ballpoint on cheap-o bond paper.

i have been feening for a tablet pc! hey optimistic, 2 questions: what do you use it for? and do you find that it streamlines your workload any?

hey optimistic, 2 questions: what do you use it for? and do you find that it streamlines your workload any?

I use it constantly - it’s totally replaced my desktop. I’m Chicago-based and have clients all over the place, so I email electronic sketches for almost everything I do. It saves a ton of time not having to scan & touch up 20+ sketches, plus it saves a LOT of money on Pilot Fineliners (my drug of choice) and tracing paper. The pen tools are SWEET in Alias Sketchbook Pro, though it’s missing some features I need to bounce back and forth to Photoshop for (scaling sketches, adding text, etc.). But SBP is only on version 1.x, so I’m sure it will get there.

A few other plusses:

Less waste - I don’t blow through a ream of paper + a week anymore.

More secure - I don’t have to worry about shredding client’s drawings, since they’re all digital.

Since you have no hard copies, you should to invest in 2 backup drives, just to be safe

Though it’s a nice hi-res screen (1400x1050), you DO need an external LCD for doing real color work, as well as for 3D modeling like Rhino3D (for sheer real estate)

I understand this is WAY off topic… I was just going to PM this to you, but I thought some other might get something out of it. Feel free to PM me with any other questions, etc. There are a few other tablet PC threads on here…

NOW BACK TO THE X-BOX JUICE…