You’ve never seen that? that’s been their logo since 1890 or so…

Every year a number of eco-friendly blogs “discover” it, and throw them to the wolves, but nothing changes.

You’ve never seen that? that’s been their logo since 1890 or so…

Every year a number of eco-friendly blogs “discover” it, and throw them to the wolves, but nothing changes.

Even beyond the eco-stupidity of it…the execution of it is HORRIBLE. You can’t read any of the text on the small logo…I mean, there are so many things wrong with it I don’t know where to begin. 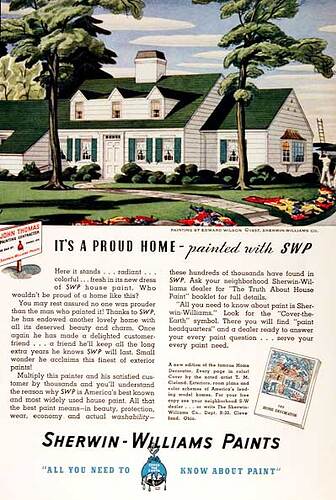 I like vintage logos that survive, especially in spite of changing politics.

Another is the old Kia logo that was a stylized factory with smoke belching out of the top. Kia has hidden this one so well that I can’t even find it in a google search. I think it was used on the Kia Sephia (first Kia we received in the US), but only for the first year.

The old Bucks logo is so great because unlike most other major league sports team animal logos, Bango (the buck) doesn’t look like he’s about to maul your face. He’s just chillin’ all fancy, spinning a ball on his hoof, eyes closed! That’s confidence that says “bring it!” without resorting to fear tactics.

And I think the Sherwin Williams logo is fitting. I don’t know about you but I always pour buckets of paint on the ground. How else am I supposed to get rid of them? You should see my backyard!

I’ve never seen the factory before, but can see it now.

I like the SWP logo. It sure is strange, but brings memories of a different time. Still, they’re honest about their past instead of trying to cover it up (attempt on pun intended).

That SWP logo has stuck with me since childhood. No better “marking the territory” logo than that one, thanks for reminding me of it. Epic logo.

I have to give it to them that this is one of those logos that have stood the test of time. They have not changed and it is cool that they still have that old school feel. Is the logo contemporary, modern and hits all the trends, no, but I argue that they do not need that. Them Benjamin Moore, and Dutch Boy are the only 3 premium paint companies out there. They all have not changed their identity in decades.

Love this! I love old signs more than anything.

I just did a google image search for “kia logo” with the quotes. I just love what they’ve done with google’s image search recently by the way. That you just get images, no text and the result page is “infinite” (just loading new images as you scroll). For some reason some of my friends and colleagues don’t get their results displayed like this…

I’ve also turned off “customizations based on search activity” in google as I hate getting my search results “contaminated” by my previous searches (don’t think that made any difference in this case though).

Interestingly the logo was originally designed by the Socialist Workers Party “SWP” in an effort to literally “Cover the Earth” Communist Red. After they defaulted on their payments the Graphic Design Agency sold the logo to Sherwin Williams. I’m surprised you guys didn’t know that.

Should we notify Glen Beck’s staff to look into the matter?

Wow. I am astounded at what I am reading here.

Has anyone gone to the website and seen the execution of the logo in a digital format? It’s horrendous.

Sorry, I have to disagree that legacy trumps good execution of a brand within the moving landscape of brand identity.

Yes it’s impossible to read, but with an icon that old do you really need to see every detail? The wordmark has changed (for the better)

… but with an icon that old do you really need to see every detail?

Which leads me to ask … what other archaic, unchanged, icons come to mind?

Remember, SWP was founded in 1866, the year after the American Civil War ended. According to the SWP website the “Cover the Earth” logo was developed in 1893 by their in-house, one-man, advertising office and accepted by the U.S. Patent Office in 1905.

There will be a quiz at the end of the period.

I prefer the idea that it is socialist.

Ford and coke come to mind as two companies that have essentially the same logo for the last 100 years. Maybe some alcohol too…Johnny Walker, Miller, etc. Also, cigarettes, Lucky Strike, Malboro. Strange that the more sinful the company’s products, the more durable the company seems to be. Playboy? 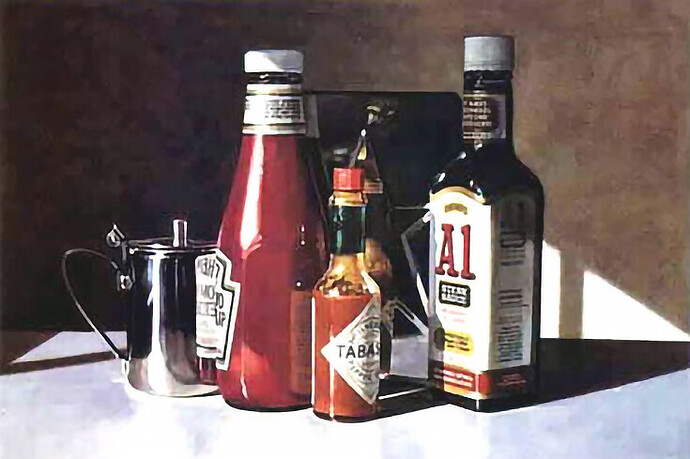 The bottle shapes are as identifiable as the labels are.

I remembered Lea & Perrins being started in England in the early 1800s. A bit of googling revealed that their sauce was imported by a restaurateur in New York in 1839. I did not realize that their logo had changed. But what might be more identifiable as Lea & Perrins is the paper-wrapped bottle; the name can be ripped off but you still know what you’re getting. 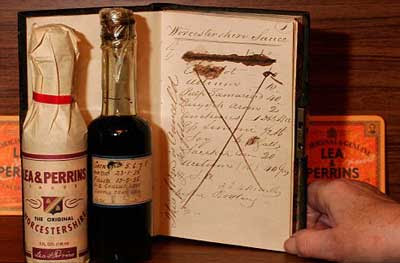 The early 1800s is getting back there…

Any clue when the first “logo-ed” brand name appeared?

Perhaps this should be moved over to Branding P&R Design

Ford and Coke are two great examples. Also the three oil giants Texaco, Exxon, and Shell. Though they we not developed in the late 1800’s they were designed in the Raymond Loewy and have not change drastically over the years. Others that come to mind are, GE, BMW, Alfa Romeo, and as much as I hate to admit it even Hershey Chocolate.