Hi All, I know this comes up quite often so I apologize for adding to another thread about what computer to buy. I’m currently running solidwork 2012 and keyshot on a new macbook pro retina in bootcamp. It works quite well but a recent job is showing its limitations. I’m looking to get a dedicated tower pc that I can use to process intensive parts (patterns on compound surfaces etc.) Can anyone here recommend a powerful tower that can handle heavy solidworks? I apologize I’m not the most knowledgeable about this subject. Looking for a system to run latest solidworks and keyshot. Can handle large assemblies and can handle compound surfaces with complex patterns ( is this even possible?) Thanks in advance, any suggestions are greatly appreciated!

Are you looking to build or buy?

More importantly what’s your budget? Generally I’d say go out and spend as much as you can, but these days you can get a very potent workstation for around $1500. If you do a lot of Keyshot it may be worth trying to spring for the 6-Core i7 series, 16Gigs of ram and an SSD. Solidworks isn’t super demanding on the video card, and Keyshot doesn’t leverage the GPU at all so you’d probably be fine with a mid range gaming card like a GTX 750/760 - stay away from AMD GPU’s for CAD.

Thanks for the quick reply. I would like buy an off the shelf unit as I dont really know how to build one. I would like to pay under 2k really just wanna get somethin good and fast that will last awhile and can use my laptop as a backup for light work. Can you recommend some units that might be good? No worries if not i can dig around. Thanks again!

Hi,
at work i’m using a HP Z600 workstation with Catia V5 which runs flawlessly (but is also quite overdimensioned in my opinion). Maybe you have a look at the Z400 series, which would fit your budget better.

Thanks for the repsonse, what do you mean by overdimensioned?

Can anyone recommend a good site where you can pick your own parts then have ti assembled? Or is it smarter to buy an off the shelf? Looking at the HP z400 series

The z600 usually comes with a 6 core Xeon, which is quite expensive and not too useful (vs. money) for everyday 3D CAD work.
OK, you’ll be using Keyshot as a CPU based renderer, but you still have to balance budget and performance. If you use keyshot a lot/most of the time, trust in cyberdemon’s advice. But i don’t think you’ll find such a unit with the professional workstation product lines liek HP Z, rather with high end gaming PCs.

stay away from AMD GPU’s for CAD.

Curious why you say to stay away from AMD. I have computer running a W5000 FirePro with Solidworks and Photoview and it has worked very well for me. I’m in the process of building another machine and was considering using one again, but I’m very open to outside perspectives. 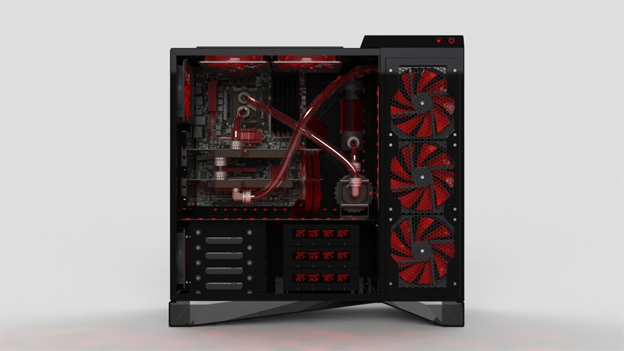 How To Build A Faster 3D CAD PC

Interested in building your own 3D CAD PC? Here are the important factors to consider and a couple example builds to get you started off right!

The word is, that AMD graphics adpaters don’t render as precisely as nVidia ones, meaning per pixel image accuracy. Whatever. I can’t proof or deny that, as it’s not exactly my kind of biz (I’m an engineering guy

@ studiomkllc
Nice article, but the statement “If you build it, it will rock!” doen’t fit too well. You can be lucky and your setup runs like hell (I’m also using a Gigabyte MoBo, H77D3H, in my home PC and it didn’t crash once in 11 months) but you can also be totally out of luck, like I was with MoBos, Grapics Adapters, NICs,… prior to my current home PC setup. With an off the shelf workstation, you’re rather on the safe side

stay away from AMD GPU’s for CAD.

Curious why you say to stay away from AMD. I have computer running a W5000 FirePro with Solidworks and Photoview and it has worked very well for me. I’m in the process of building another machine and was considering using one again, but I’m very open to outside perspectives.

Sorry, when I said that I meant gaming class (Radeon) GPU’s. If you are going with a pro level card, then either is fine. For most people, a gaming class Nvidia Geforce card will provide more than enough performance. For Solidworks, it won’t enable real view, but most GPU’s are fast enough now it’s hard to justify the hundreds of dollars of difference you’ll pay.

The reason I also suggest starting with a gaming card (if you don’t know what level of performance you demand) is it’s very easy to rip out a gaming class GPU, and add a Quadro/FirePro card. But if you jump straight to a $800+ GPU you’ll never know if you could’ve lived with one that was ~$200.

The Dell Precision/Z600 machines are great machines, but for $2k you don’t get a lot for your money. As far as who is good for boutique PC building, you could check out Maingear and Origin PC, but they also add a lot of overhead for the same parts you could get at the store.

Do you have any nerd/IT friends at work? If you can find someone who can show you how it all goes together it may be worth building your own. It’s easy to spec out the parts online and there are enough how to’s on the internet that if you have the time to watch the videos to avoid some common mistakes (like people who screw the motherboard directly to the metal case and then wonder why there are sparks shooting out) it is certainly the best value proposition. I just built nicely equipped overclocked 6 core workstation (4.5ghz) for a friend for under $1500.

Also, these days the comments about more cores vs fewer cores and higher CPU speeds is largely irrelevant. Intel Turbo boost is designed to maximize single core speed when you are using only 1 threaded apps and then scale back when you’re rendering, so it’s easy to get the best of both worlds. And most of their chips are easily overclockable such that you can get at least another 1ghz out of most chips just by investing ~$100 in a good CPU cooler.

Cyberdemon pretty much sums it up I think. An i7 ivy bridge (s1155) + midrange quadro + 8GB ram will probably be enough, and won`t break the bank. I build a few of those for partners, no compliants at all.

Sorry, when I said that I meant gaming class (Radeon) GPU’s. If you are going with a pro level card, then either is fine. For most people, a gaming class Nvidia Geforce card will provide more than enough performance. For Solidworks, it won’t enable real view, but most GPU’s are fast enough now it’s hard to justify the hundreds of dollars of difference you’ll pay.

Just a quick addition to the above… Realview can be enabled for any nVidia or ATI/AMD GPU with a quick tool found on this site. As far as I know, there is no difference between GeForce and Quadro, sans price, within the scope of what we do. Go for the gaming card.

thanks all for the helpful feedback. Would love to be able to find a good off the shelf tower if not find a local friend to help build me a pc. I never use realview, is that weird? Doesnt seem to be that helpful. I colorize in solidworks then quickly output from keyshot.

Budget wise I choose for a pentium G2030 (upcoming months no fancy surface-modelling on my agenda, performs pretty ok in Solidworks + 3dsmax), maximus V extreme mainboard (the motherboard is where it all starts, choose wisely), 8gb corsair ram (when rendering/modelling I get up to 6).

What would be your budget when buying a new pc?

Would love to be able to find a good off the shelf tower if not find a local friend to help build me a pc. I never use realview, is that weird? Doesnt seem to be that helpful. I colorize in Solidworks then quickly output from keyshot.

Not weird to me! Its too wild for my taste - I prefer a matte white across the board so I can see the form well then play with colors and materials in other software.

I would recommend an i7, 8+ GB DDR3, nVidia GTX(xxx) and a 120GB+ SSD. The 780 in my home desktop is solely for games - the laptops craptastic (relative to the 780) video card is more than enough for Solidworks.

I was surprised to see that Amazon has some good offers from Alienware (Dell) including i7’s and GTX660s for ~$1200. Also, Gizmodo’s deal site often has desktops. In either case, you would need to purchase a monitor separately. You’re in a cushy spot here… I think sticking to everyone’s recommendations should leave you under your budget but in a good place regardless of where you end up buying.

If $2k is your budget though, I would consider splurging for the 6 core 4930k, spend an extra $100 on a Corsair H100i water cooler and some quick ram with a good motherboard. That will net you a wickedly fast machine for both Solidworks and Keyshot for less than you’d spend on a mediocre pro workstation.

The 4770k also is a solid overclocker. With good cooling and no real work you can easily hit 4.2-4.4ghz. These days you literally just open the bios, type in two numbers, reboot and that’s about it.

Thanks so much for the specs really helps me define budget/performance, and hopefully other people too. Looks like i got xmas gift for myself coming up.