This was a project where the theme was to think of an inconvenience and to create an object that addressed the issue.

One thing that’s always annoyed me is keeping a journal when I lift weights. I hate taking this notebook and pen everywhere with, half the time I either forget to take it with me to the next machine, or I leave it at the gym entirely.

I looked on the internet and found that although runners have countless gadgets like Nike+, pedometers, and other electronic gizmos, but there’s none for weight lifting. So I decided to create some kind of digital log for the young adult, that not only makes keeping track of workouts convenient, but also distills it into a way to track progress visually.

So I plan on designing two things, the module and the interface.

The sketches below are my first ideations of what the module could look like. The ipod is shown for scale. One thing I’ve gotten mixed reactions from was my desire to put an MP3 function on the module. My thought is that you’re not going to want to carry two separate items on your body for music and record keeping. I was wondering what are your thoughts on this?

Please excuse the poor quality of the pix, scanner crapped out so all I had was my phone.

all criticism is encouraged, thanks! 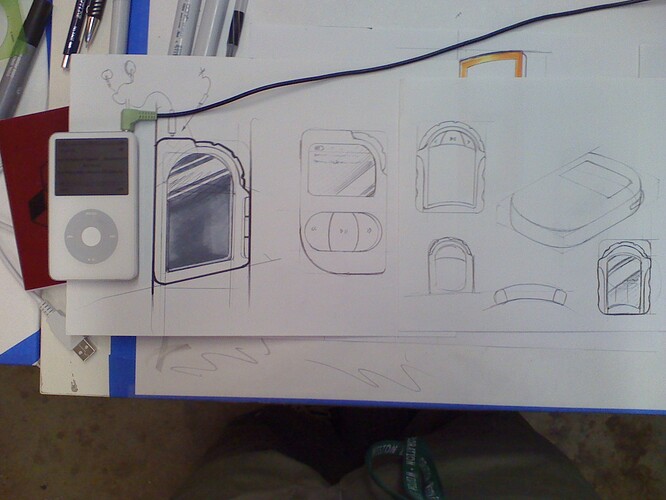 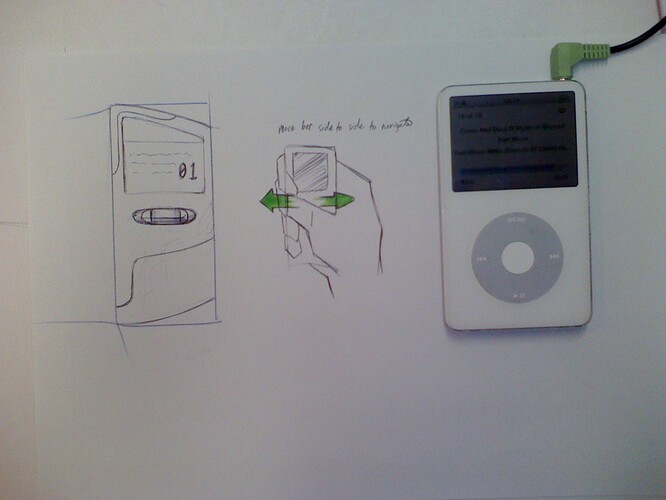 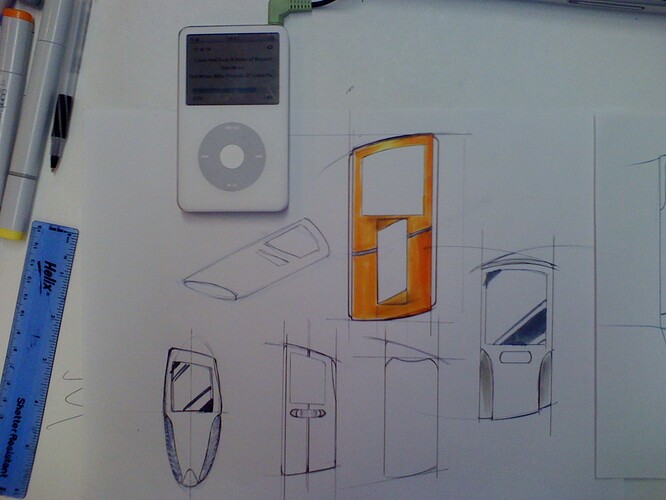 I dig your drawings. Keep us updated!

http://www.gyminee.com/ seems to do what you are suggesting. It might be interesting if you incorporated acceleromters into a belt or gloves that worked with your ipod. This would be similar in concept to the Nike+ipod shoes.

Agreed that gym record keeping is an issue.

I dig your drawings. Keep us updated!

thanks! Could you elaborate on which ones you like better? I’m partial to the slimmer looking ones.

http://www.gyminee.com/ seems to do what you are suggesting. It might be interesting if you incorporated acceleromters into a belt or gloves that worked with your ipod. This would be similar in concept to the Nike+ipod shoes.

Agreed that gym record keeping is an issue.

Yes, this was definitely what I had in mind in terms of record keeping. The ability to sync to iphone is pretty cool too. Hopefully, I can take this idea to another level yeah?

Right - assuming that you don’t want to design another mp3 player (which might be fun nonetheless) you are probably smarter designing a product that fits into the ecosphere of something like an ipod/Blackberry/Pre.

So I kind of switched it up and decided to make the record log in the form of a watch. I’m wanting the band and body to be made of TPU and I was wondering what I could use to represent that in my model. Can anyone recommend a material I can use? Could I cast it out of silicone?

if you have access to a vacuum casting machine you could make a silicon mould and then cast your model in a resin which mimics TPU this way you can get a really good, realisitic finish.

thanks! Could you elaborate on which ones you like better? I’m partial to the slimmer looking ones.

Try to avoid getting into direct “which one do you like better” questions. As a designer, you want to avoid that as much as possible. That conversation never ends in a good way. You end up bickering over whether blue is better than red, or someone hates a product that is round instead of square. That’s not your objective.

Your objective is to listen to everyone’s input and provide what you believe to be the best solution to the problem. Focus on the problem. Distill what irritates people about the task at hand. Come up with multiple solutions to solving the problem. Refine and iterate those problems and provide multiple concepts that tackle the problem and have information to back up why your solution solves the problem.

When someone says, well it should be red and not blue, you should have some kind of articulate answer as to why you chose what you chose. Going as far as to present color variations that work for the product, and not for a single individual’s personal taste.

What I believe 914 was getting at with his comment was that your sketching and thinking process shows promise. That you are obviously thinking and are communicating the issue well. Keep running with it.