Just looking at some design aspects of working areas on trains and what people think of this and how this could possibly be improved? I feel some obvious one’s are free wi-fi, power socket for each seat and big enough table for a laptop.

How do people feel about privacy and would they even bother working on a train if they were given proper facilities to work in?

I would be just as likely to work on a train as a plane, as long as the ride was smooth. A rough ride might inhibit sketching, but that’s the same situation as flying. I don’t know that the privacy concerns would be much different than a plane, either. I’ve never really been concerned about privacy too much on a plane, though. That said, I’ve never done much serious work on either (certainly nothing super confidential), just because I don’t travel much, except for vacation (then I’m drawing or reading, but for pleasure).

Yeh that is true…I guess it’s also a little bit harder for us designers to try and do any sort of sketching, idea creation on a bumpy ride.

I was just wondering if a dedicated coach for the business traveller would be of any use i.e. having a coach with pods that provide more space and privacy?

I used to take the Accela from Boston to NY once a month when I was at Converse. I always would work on my laptop, I had one of those AT&T 3G USB things. I would just do emails mainly, maybe redline some cad.

I’ve only ever worked on the Caltrain. NY Subways are impossible. Caltrain has nice booths with tables. I did some sketching on my ipad, albeit sketchy. It was more idea sketching/note taking than presentation sketches. 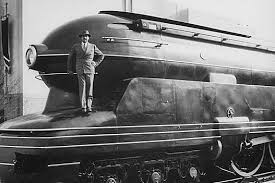 I used to work/sketch on the Bay Area Caltrain and the First Great Western, Bristol to London. Both are pretty smooth, but still bumpy enough to notice - i’d say that’s the biggest problem for a designer. Sometimes they can be a little crowed too, and you couldn’t really spread out on a table or open up a 17in laptop in some seats. The UK lines usually have power plugs under each seat though, and tables every 5 seat rows or so, which is a big plus. It’s a great time for emails, writing(typing), and reading

Ha ha yes I would say that some of RL designs were quite radical for that time period, a very fine example the picture above

I think I will need to do some further research on American passenger trains vs UK trains.

Thanks for the other feedback as well!

When I worked for Loewy in 1971, I remember several of the then older designers telling me of the kits they had, drawing board, tools, etc., that they would take with them on train trips to the mid west and west coast so that they could work during travel time. No time wasted for designers at Lowey. I was working on the design of a new bus for the US Department of Transportation, being engineered and prototyped by AM General in Detroit. We would leave NY on a 7 AM flight to Detroit, work 24 hours in Detroit, fly back the next morning and work the afternoon in NY before going home. So many hours – what fun that was.

Crikey Dan! That makes you older than me! Old’s Cool.

Would appreciate it if anyone has a couple of minutes, Iv’e also put together a quick survey relating to this issue with trains:

When I was commuting back and forth to Tokyo, there was literally no room to sketch. I got really good at sleeping while standing, and squished between ten people from all sides.

If I paid the extra $4 for the Greencar, I could get a seat and the ride was super smooth, so I could sketch or use my laptop. The RTD in Denver usually is a bit too crowded and bumpy for sketching.