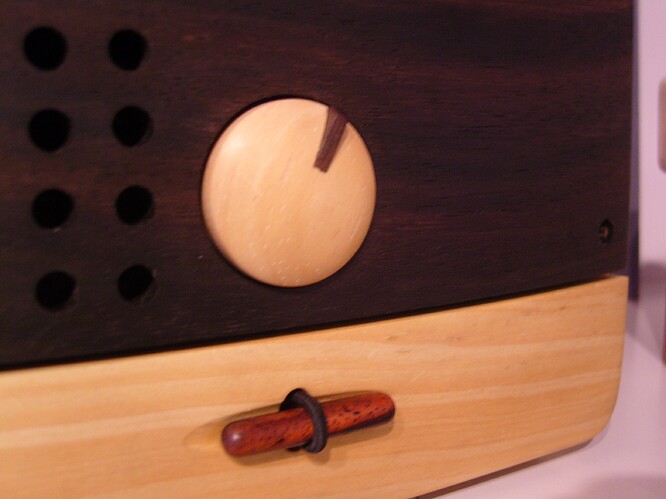 Stunning. That is some top-notch craftsmanship. I bet it sounds wonderful, too.

just today I was at the REI here in downtown in Austin buying some tent stakes for a camping trip starting tomorrow… just so happens the REI is right next to an Anthropologie (women’s clothing/lifestyle store for those who don’t know), and my girlfriend begged me to go inside with her since we were right next door.

I actually don’t mind visiting this store, in my opinion its excellent quality and taste. always nice stuff in their kitchen department, plus great style and fashion in women’s clothes. reminds me a lot of the south of France.

anyway, as I’m poking around the kitchen department, only man in the store, I spotted the 2nd radio pictured (the Areaware, I suppose its called).

priced at $200+. nice quality/build. some insightful design features that weren’t tacky. felt really nice, warm, would fit well in the right room. however, messing with the knobs (while off, mind you), it was kind of difficult to understand intuitively what they were used for. the first knob had one or two ‘clicks’, and same with the 2nd knob. one of the knobs may have had 3 clicks, can’t remember. the third knob adjusted the frequency.

anyway, thought I’d respond since I just spotted/interacted with this just about 2 hours ago.

I saw those a few months ago down at the Boston ICA store and played with it a bit, super nice!