Some of you might remember this sketch from a few years back: I had done some work in this area years ago, and looking at many of the new women’s shavers on the market I thought it would be fitting to do a simpler, more sculptural handle, very much inspired by classical Noguchi and Brancusi form work, and maybe a bit by Henry Moore and Anish Kapoor. There is also some actual leg like form in there as well.

The idea was to make something very simple and tactile that was very easy to clean especially in shower use. All of those nooks and crannies in most current razors get so gunked up with soap… but you don’t want the razor to slip in that application either so using a large soft durometer urethane insert that pierces the side rails for a good grip that is very flexible in terms of the users style of holding. It doesn’t have a right or wrong way to hold it. The central pass throughs I think would also help with this as well as give the user the opportunity to hang it when finished if desired. 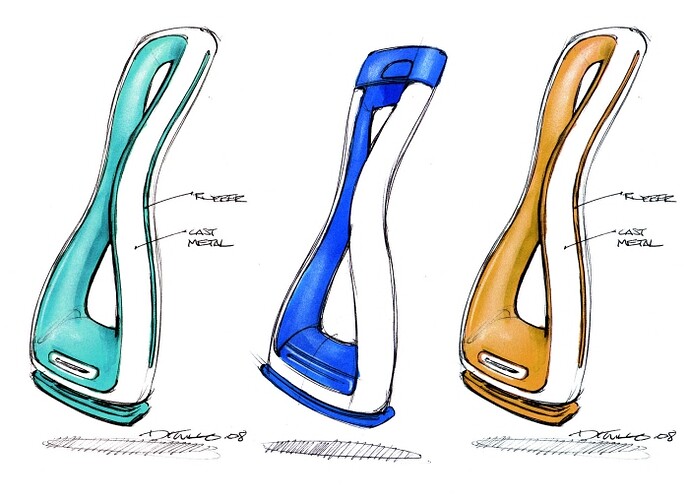 67242_P_ZGd788kz7gpk9ri88mX5GdN.jpg700×508 122 KB
Reed Prototype an Model approached me to make some working prototypes and I set about defining what the design was beyond just the 3/4 sketch. I’ll try to dig up some of that refinement work, but in the mean time, here are some photos of the final models. On a side note, if any of you need a new prototyper, Reed is pretty amazing! http://www.rpmaustin.com/ 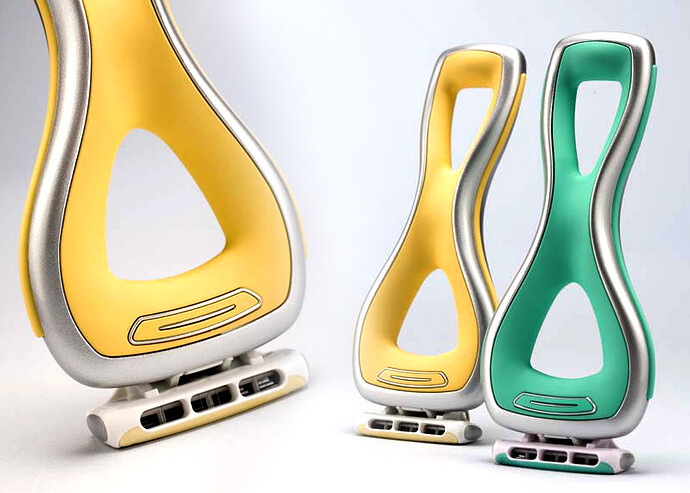 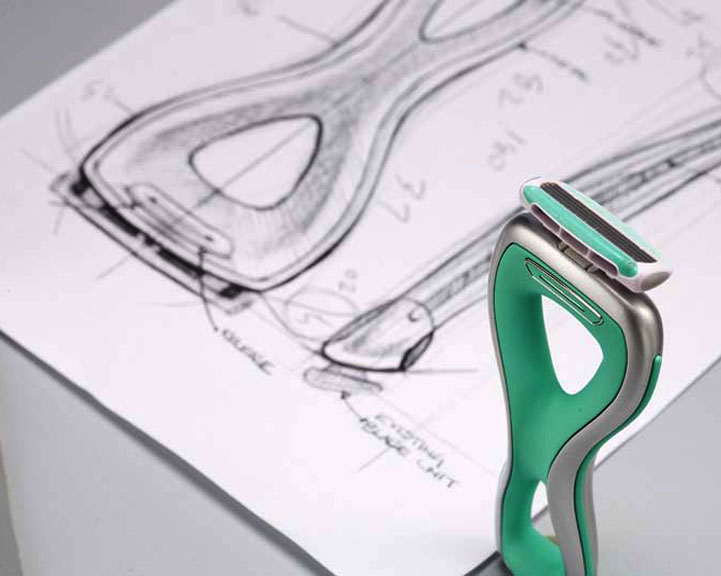 I’d shave my legs with that haha!

But in all seriousness I remember this sketch from when I first checked out your website. It’s really cool to see it taken from sketch to something you can touch and hold! Did you send them a CAD file or did they work off a technical drawing?

I assume the idea was to use an existing razor head? Since this was sort of an exercise (I assume),if you went into production with this would you run into copyright issues with this? Or is that not really an issue at all?

The final form is quite elegant in its simplicity. I have the same questions as above, did you do the cad or did they do it from your drawing?

There are actually many “aftermarket” handles that use cartridges from the main manufacturers, so it wouldn’t be an issue, but no productin plans. This was a portfolio exercise for both of us. This cartridge however was worked on by Evo Design and I was on that team. It has a good aesthetic match.

From the initial sketch I did some 1 to 1 orthographic sketches and sections. RPM did all of the CAD and several iterations in Renshape before the final. They are oerfectionists! Awesome to work with.

I visited RPM last year with my design class. Amazing place, interesting how their stuff looks better than the real thing.

Cool form. I like that it’s feminine but not girly.

One area that concerns me is the handle bulk around the cartridge.

It is wider and thicker than the cartridge itself if you’re looking down at it while holding, decreasing the visibility for detail work (ankles, armpits, bikini area). If you look at competition, all of the handles taper as they approach the business end, or are overall slimmer and the handle thickness and width are never larger than the width or length of the cartridge. It is done to increase the visibility of the area you are working on and to make sure as much of your leg (or whatev you’re shaving) is unobstructed to catch errant hair patches. I feel that cutouts are probably solving this issue, but it is hard to say without trying it out.

Ah, great point. It would have to go through som testing if it were to go further. It could be scaled down 10% to resolve some of this. Lookin at it, it did get a touch wider than yhw layout sketch in the image. Again, just visual testing here, but it does curve away rapidly, so I wonder if enough cartridge is exposed for visability? Still, if it were me, I’d want as much visibility and control as possible in those areas.

That was the goal, to be feminin but not girly. To have sleek an sometimes soft form but still be somewhat technical.