Just thought that I would post some pics of a work in progress. I am not sure how this will progress. I am going to remodel this monkey in a pose. Right now is a default t stance. I was planning on rigging in Blender but that is a little too tedious and the mesh is not really all that great for animation downstream. I think that I will be purchasing a seat of Houdini to rig for animation. In the interim I will be modelling a new model in a dynamic pose, and perhaps CNC the mold.

Any thoughts on improving the design or what to do moving forward? 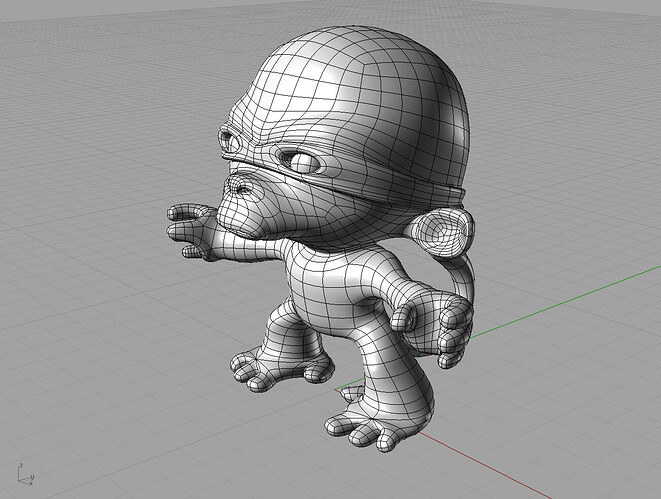 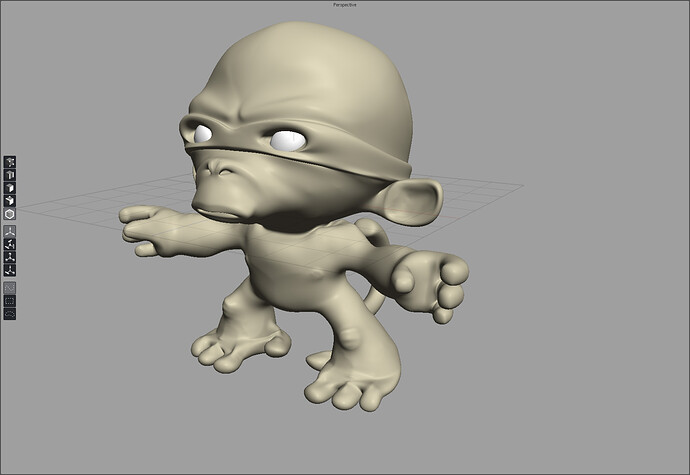 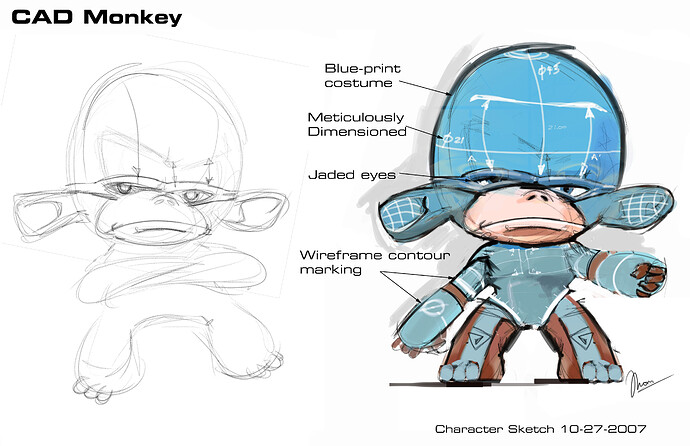 At first glance, I’d say try to capture more of what you have in the blue sketch in the model. To me it loses something between them. The proportions of the face, in particular, are much nicer in the sketch. really like the shape of the head, placement of the eyes and everything about the drawing. The quality of the sketch is top-notch.

As far as the main body, maybe try and make it less of a “block”. By trying to think more about where the ribcage is in relation to the pelvic bone , I think the gesture/stance of the body will improve.

Did you try sketching out turnarounds of the figure before modeling it? If not, it might be worth a try - then you could use those as an underlay to keep the model truer to the drawings.

Yes- you are right about the emotionless stance. I was hoping to get some of the emotion back while rigging, but maybe I will generate some more Views in Painter.

agree with Optimistic that you lost something in the shape / proportions of the head. There was a drawing I remember seeing called something like “the proportions of cuteness” that showed baby vs. adult humans, rabbits, etc. and it was very clear that a prominent forehead, big eyes etc. were almost universally seen as “cute.” not that your going for cute here, but making the forehead more prominent as in the blue drawing would improve it I think.

yeah… im with thee guys, i would suggest increasing the forhead size, or squeezing the facial features into the lower third of the head. This will help more closely resemble the charicter of the sketch wich looks awesome.


also, in the CAD… around his eyes is that a bandana or is that skin? it looks more like a bandana than skin…

To me, it’s also that the mouth and chin aren’t as rounded- in CAD they seem to be protruding out, with the chin receding and are less cute.

Also, the eyes in CAD are more round (as well as a little too high on the face), and there’s an angularity to the eyes in the sketch that really helps communicate an attitude without hurting the cuteness (sort of like mutant ninja turtles).

Agree on making the top of the head bigger relative to the other features.

The brow looks a little better under the mask too.

Been bogged down with life and projects. Here is a little update based on feedback.

Looking good! The face looks way better than before.

What software are you using? You’re getting some great forms out of it. I still have yet to try doing a character in 3D cad…

Oh, thats so much closer than before…

next I would try to focus on the lips, the new guy seems to not have the chin of the sketch - or that whole ellipsoidal protrision from the head incompasing the lips… whatever… keep going man, its looking good.

I must say that your initial sketch is interesting, I would like to see a some interesting sketch gestures that this monkey would be in. I guess I feel that the sketch is still much stronger than the push-pull surfaces. I’m interested in seeing some more your initial character developments…like what if he was a silver-back gorrilla? I realize all this might be extremely late in the response, but I saw the posting just now and thought what the hell, I apologize.

optimistic: I am using Silo and t-splines. Silo is an entry level subdivision surface modeler-not really CAD workflow. But it is really great for organic flowing forms. It is really quick at creating primary surfaces. t-splines is a godsend for converting to nurbs. This model will be output to a z-corp when I get done.

jGray: I am working on the chin- thanks for pointing that out. The look changed as I was modeling

masood: Well- there was not a whole lot of sketches that explored other species because this is going to be a series of monkeys- Sketch Monkey (he’s the hairy one), CAD Monkey and RenderMonkey

LabRats: Yeah I am glad for the extra iteration.

geez Parel, how many cad packages, plug-ins, etc do you use?

Not a lot. Mostly Solidworks at work and on contract projects since I own a license. I have a seat of Rhino that I use once in a while. Alias was what OSU taught.

I am trying to learn some animation techniques so picked up some poly modeler techniques. Silo is cheap so I bought a seat. It is not really all that great for hard core mechanical forms, but it is a different workflow and I am trying to not get set in my ways.