Why I hate Blade Runner

I was just about done getting angry about 2001. Man, we don’t have HAL, mid-century modern Scandinavian furniture is not common place, we aren’t sending people to Jupiter. The real 2001 was so disappointing.

This weekend, I watched Blade Runner again. Ugh. 2019 in LA. We are going to miss this one too aren’t we? We won’t have flying cars, no enormous buildings, no replicants and no mining colonies around other stars.

Also, some of the “future” technologies in Blade Runner look hilarious today. Every monitor/TV in Blade Runner is a CRT, often times ridiculously small. They completely missed the LCD. Although, it appears that the incandescent light bulb ban in the US has taken effect, all the lighting appeared to be fluorescent.

Anyone else upset at the future?

I’m so upset with the present that I don’t even want to get into the future.

Now we can’t afford the future.

From my rooftop at night. I do live in Blade Runner 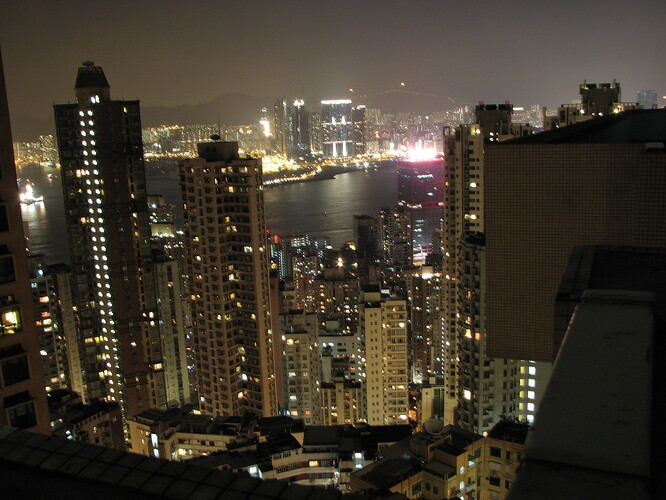 Toss a Vangelis soundtrack to that image Tim, and you’re there.

Thank God Blade Runner didn’t come true! 2001 isn’t really that far fetched if you swap out a few things (you’ll recall the Earth was at the brink in that movie.)

Some great things since I was a kid:

Tim: Exactly, LA is just a hole in the wall compared to HK, Dubai, Kuala Lampur, Shanghai, etc… We were so far off.

I wonder if the next crop of sci-fi films will be set in a future oriental city…or maybe African? Perhaps with racial problems relating to all of the American/European refugees arriving!

Maybe this is why scifi-ers are now re-writing the past with their steampunk, et al. Technology is now progressing faster than imagination or they are now too scared to be so wrong?

I like the Firefly take on things…500 years to go, but the US and China link up to combine the evil empire known as the alliance.
fun stuff.

Here’s another perspective on this subject:

Even worse, imagine kids that will watch this movie in a few years (I know they won’t, but I can dream). They’ll flip it off right at the start saying, “Man this is BS, LA ain’t like that.” Argh!

Given what US cities looked like in the 70’s (the original book was written in 1968), the Cold War and rise of Japan, I don’t think it was a stretch to imagine this as the future in forty years. Gibson’s Neuromancer was of the same era and had many of the same themes.

I think the lesson is that it’s tough to look even that far into the future. Hell, even 10 years is tough!

But some crazy things have happened city-wise since that movie. Look at Dubai!

Is it just me, or is it that the majority of significant technological advancement of the last 50 years has been in communications. Sure, much of this was added in the advancement of basic computing, but the significant advantages in our daily life are communication: email, websites, Core77, cel phones, cheap long distance, hell even FedEx. Maybe I’m stretching this a bit, but it seems like the previous generation was more about reducing home labor: washing machines, fridges, frozen food, centralization of agricultural production, fertilizer. The first generation communication technologies were uni-directional as well: TV and Radio. Maybe that is what the next generation of sci-fi writers should consider…

The transistor made it happen: ushering in the end of the Industrial Revolution and the beginning of the Information Revolution.

yeah, the integrated circuit is a huge part of the reason why tech progress in communications & electronics were so dominant. Material advancements, manufacturing improvements, and innovations in organization & mangement all had something to do with it. These qualities exist for all industries & disciplines, but thanks to quirks of history, cultural shifts, divine providence, or dumb luck, electronics benefitted the most.

The best comment I heard a futurist make recently was, when making predictions, suspend common sense.

Actually, the language spoken is something they called Cityspeak, which Edward James Olmos came up with himself after doing a bunch of language research. It’s a lot of Japanese, but it’s mostly Hungarian (with some some French and German thrown in) which is why it sounds so odd. The noodle shop guy is speaking Japanese. In the original script, everyone was speaking Japanese. That probably seemed like a good bet in the early 80s.

What about Star Trek?

According to them, we should’ve had advanced genetic engineering to the point of having a population of super humans take over the world 10 years ago. And the Vulcans are supposed to be snooping around our solar system right about now, concluding we’re too primitive, maybe they should return in another 50 years time. Faster than Light travel in the year 2063, when most major cities in the world have been blown up, earth is in a nuclear winter and the Borg are invading.

Actually, the language spoken is something they called Cityspeak, which Edward James Olmos came up with himself after doing a bunch of language research. It’s a lot of Japanese, but it’s mostly Hungarian (with some some French and German thrown in) which is why it sounds so odd. The noodle shop guy is speaking Japanese. In the original script, everyone was speaking Japanese. That probably seemed like a good bet in the early 80s.

I think in the book the Japanese actually run the West Coast… if the movie brings you down, read the book. You’ll find a new low. I love that book. I also love that it called “Do androids dream of electric sheep?”

Yo, I agree. Great book.
Actually, the book is the reason “why I hate Blade Runner”.

I loved the version presented by the original book, but there were so many distractions because of Ridley Scott’s omissions and changes that it was difficult to see the real work without referencing the vastly differtent world in the movie. I know it was necessary for him to make these changes in order to translate the story to film, and I acknowledge that the movie stands on it’s own, but it kind of diminished my enjoyment of the book.