Why do people love The Bean in Chicago so much?

I had a meeting down by Millennium Park today… traffic being light I had 30 minutes to kill before hand so I thought I’d stroll down to Anish Kapoor‘s Bean. This was 2:30 on a Tuesday and I was not surprised to see a crowd of people taking picture of it, with it, under it. People love this object. Is it the mirror finish? Is it the simple form with complex curvature? Is it the monumental scale? Maybe it is all three of those things, but every time I come to Chicago I like to check It out as well. 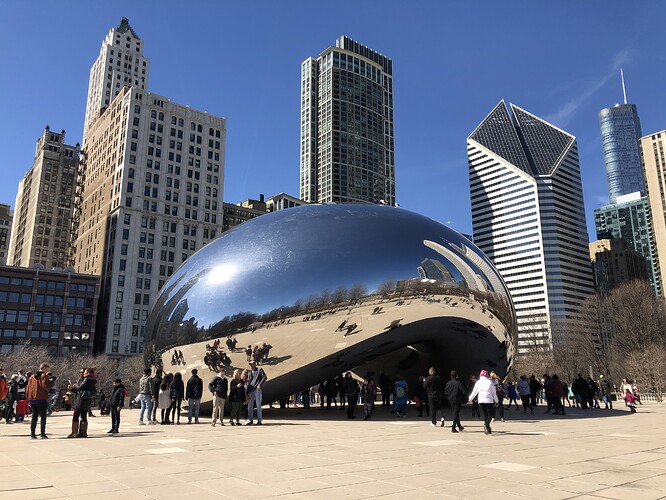 For me, it’s interesting how it captures the world its in, but with a fun distorted twist.

Here’s some facts I just found on wiki of its durability and cleanability. I didn’t really consider these things since it always looks great when I see it, but it’s given me another appreciation for public art installations (and maintaining highly polished work!).

People do love mirrored objects. Kapoor is a friend of a local museum (De Pont) and has donated some of his works there. People spend most time with his work probably because it distorts perception, including that of ourselves. There are books written about the psychological effects of mirrors. At the end of the day, another reason people like it is that it creates cool selfies.

I have a knee jerk disdain for spending public money on art, but the Cloud Gate definitely deserves it. When I first saw it, I thought, “that’s dumb” before spending 45 minutes walking around it, although I can’t explain why. It’s magnetic in a way that very few art pieces are.

We’re all just monkeys looking for the next pretty thing.

It’s all about the distortion - it distorts you, everyone around you and everything you see in it. I think it helps the human psyche to see things differently - we designers can see things that way already but most people need a physical aid, whether visual, auditory or tactile to experience it.

It’s all about the distortion - it distorts you, everyone around you and everything you see in it. I think it helps the human psyche to see things differently - we designers can see things that way already but most people need a physical aid, whether visual, auditory or tactile to experience it.

Scott is absolutely right. We all love Fun House mirrors for the same reason. Imagine The Bean finished in matte color. Still a beautiful form but not nearly as interesting.

I love it from a pure fabrication standpoint. It’s unbelievable how perfect it is up close. I can’t imagine the cost… full seam welding formed stainless steel sheets, THEN mirror polishing? In the field? Incredible.

The beauty of the polish is not the lack of scratches, it’s there is absolutely no surface distortion, on that scale is amazing. I believe the unveiling was delayed by a few weeks to fix some distortions in the polish.

I agree, it’s the distortion apart from the fact that Kapoor’s works are often technical marvels as well.
By looking into the bean, we become the bean - a human bean!