Why are the new American Muscle Cars so Blocky???

What’s up with the high window line to make it look like a chop top? A lot of cars are so blocky like a brick.

The Camaro, Challenger, Mustang, Shelby, Charger etc. The Vette is looking a bit better than that Huge blocky rear end it used to have.

Who are the designers responsible for this trend? Do people here like those designs? To me they look horrible.

If they were not that way they would not be muscle cars. That is one of the benefits capitalist market. If you don’t prefer something, you can buy something else, but clearly there is a group of people that love the brutal aesthetic of the muscle car, so the segment exists.

The answer lies in your question. When you hear “Muscle Car” do you see them it being sleek and trim like a Porsche? Or Ferrari?

Obviously there are fans of this style of car. I know a guy who sold his GT500 to get a Shelby, and proclaimed it the best day of his life. He doesn’t drive an M5, as his daily driver needless to say.

That’s not true at all.

The Original Muscle cars were not blocky at all. The original versions were very s e x y! Nice lines and very slick. The new remakes are not even close.

For example, here’s the Challenger.

When you hear “Muscle Car” do you see them it being sleek and trim like a Porsche? Or Ferrari?

I was referring to American Muscle Cars from the 70’s and prior.

One word. Detroit. Much of the design language apparent in that city’s product seem to be defensive posturing towards urban decay and exterior threat.

It’s a good point actually. The original Camaro was fairly lithe. Some really fine details, and a big, light greenhouse. The new one is a chunky, slab sided caricature. It’s not bad, but it’s certainly brutal in a way that classic muscle cars weren’t. Reminds me of the H2 in a lot of ways.

Here’s another example. The Charger Side-By-Side.

Any difference in how most cars these days are so bloated? Look at a Nissan Z vs. the original…

I do agree that the US muscle cars in particular could go on a diet. Lots of it I’m sure is safety, but no doubt design is a part of it. Even worse I think is the state of interiors. Most new cars and US cars in particular seem to be seas of flat plastic. Checkout a 60’s Thunderbird or any other of the era by comparison. The dash may kill you in a crash, but was damn s3xy!

The one that I feel does the best job is the challenger with all the others in my mind missing the homage that was meant to be. 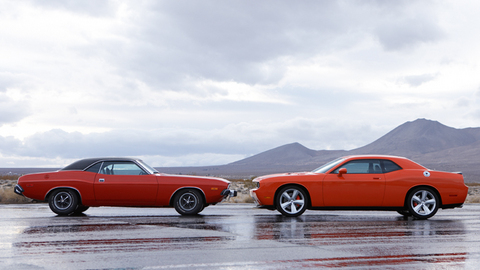 The lines themselves aren’t that different on most of the cars that were “Retro Rips” like the Challenger and previous generation Mustang. The Charger - that doesn’t count because the product just happened to get the Charger moniker but has nothing to do with the original 2 door coupe which bore it’s name.

The Camaro was more aggressive and futuristic. But the overall trend you notice applies to almost all cars, not just muscle cars.

We forget as designers that so much of what goes into those designs has as much to do with skirting around all these health and safety guidelines as it does with styles that resonate with people.

I think Cyberdemon is making the most progress in explaining the reasoning. It’s all styling. Big wheels and a chopped look are the trends, muscle cars take it to the extreme.

As for the sources of these trends, I think the big wheels come from advances in tires and a desire to have a race car look. Of course, the first time you buy new tires, you will cry for a return to 14" wheels (like my Miata has btw).

As for the chopped look, I think it is driven by a mixture of paranoia of “others” and a desire to feel protected. Windows have been shrinking on all cars for the last 20 years. This is just the cutting edge, as is the H2 that Scott Bennett mentioned. On one hand it is aggressive, like a Roman military helmet. On the other hand, it is protective, like a welding helmet. Maybe the Jason goalie mask is the best example.

Thanks for the info. I did a little redesign to show what I might have done to make it more in tune with the original and not so blocky. I’m far from a car designer but I wouldn’t imagine these changes would compromise safety.

The shrinking windows bit is an odd thing. From the outside it certainly makes the car look more like a tank, with maximum metal shielding and minimum vulnerable glass. So it would seem to satisfy

a desire to feel protected.

But I drove a rental Camero last summer (2010 model I think), and the visibility was crap compared to my Mazda 3 and every other car I’ve driven. I think it was the worst visibility I’ve experienced, which made me feel much less safe while driving.

Thanks for the info. I did a little redesign to show what I might have done to make it more in tune with the original and not so blocky. I’m far from a car designer but I wouldn’t imagine these changes would compromise safety.

Pretty sure those changes would affect safety. Essentially you’ve remove the bumpers in whole and made a nice knee breaking angle to them. Does look nicer though.

Here’s a good article on the subject

Right, as was mentioned you cut out the bumper supports completely. You could push them back, but then you lose the distance for which they have to deform, and remember that in a crash your two variables for impact force are distance and speed. 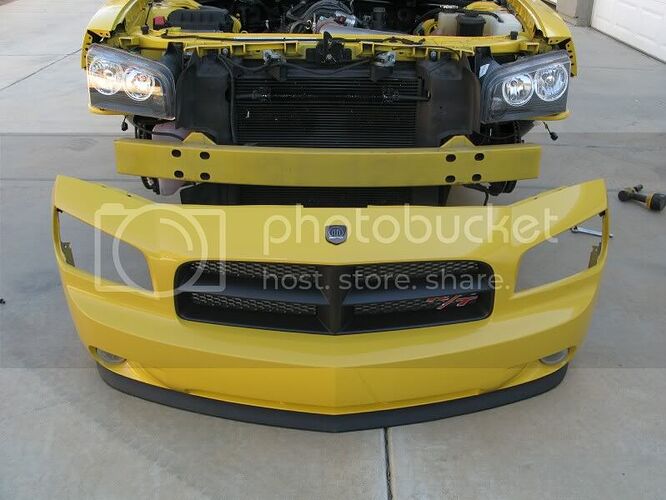 The article Nurb posted talks about some of the changes. Remember how the last Mini got bigger? That was driven primarily by required Pedestrian impact laws.

As for the sources of these trends, I think the big wheels come from advances in tires and a desire to have a race car look.

I don’t understand the gigantic wheel trend. I think a car riding around on 20" wheels (or 22" on the Fisker) looks ridiculous. Most race cars run on tiny wheels. F1 wheels are only 13" (dictated by rules). Indycars are 15". It is a severe PITA packaging brakes and decent suspension geometry inside a 13" wheel.

Right, as was mentioned you cut out the bumper supports completely. You could push them back, but then you lose the distance for which they have to deform, and remember that in a crash your two variables for impact force are distance and speed.

I could take the bumper into consideration and still make it work. One could extend the front a bit more and use form changes to suggest the lines you want. I’d like to see what the original concept art looked like before the engineers told them it won’t work!!

The original lines on this vehicle are slugish and bland. I think the 2 form changes I made on the door area of the vehicle changed the look to make it sleeker.

Also, can’t the bumper be changed without effecting safety?

I think the Dodge Viper worked very well! Beautiful lines on that car!!! I know it’s not a redesign but it looks bad ass!

Thanks for all the info!