I would like to know the designer or design house that created the chaise in the photo attached. This image is fron Georgia O’keeffe’s home, but I can not find any info on it. A friend of mine has the same one with no labels. 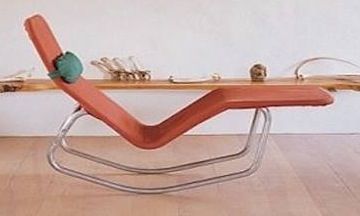 I don’t think I’ve ever seen it but I dig it. Would like to sit in one to try it out!

My friend found it

Unlike most of the chairs one would regard as classics. the Barwa has rather offhand detailing. but. considering It’s Intended use as an outdoor chaise. It’s design seems appropriate The V-shaped base is positioned and angled to enable the user to tip the chaise Into a reclining position with a slight shift of body weight. an amazingly Simple mechanism for changing the sitting angle The removable canvas cover comes In some rather strident colors. which make the chair look somewhat less than classic. but this could be overcome If It were made available with an unbleached canvas and perhaps a black anodized frame.