Who designed this chair?

Hey, I came accross this chair on myspace and wondered if anyone knew who designed it? It’s name, ‘Houdini’s shoebox,’ doesn’t bring up any results on google. 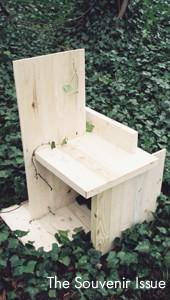 well that is some weird kind of chair

Looks like something Gerrit Rietveld would have done. Wanting to think I’ve seen that chair in his body of work somewhere. Inspired by Rietveld at least.

looks like someone just hammered that together in the back yard for fun.

I’m going to submit this photo next time some a-hole says “think outside the box”.

I think I saw that in class when somebody didn’t put a lot of time into their project.

Hey, I came accross this chair on myspace

So, why aren’t you asking there? Log-in and ask the guy where he took the pic. “The Souvenir Issue” must have some meaning.

This thread is old. NECRO POST! For real that chair is not a looker, I don’t care who did it. The wood used doesn’t lead me to think it was a high quality product. I might be wrong but I won’t feel salty about it.