Where is your timeless design?

Both were my parents’ apparently bought in the 70’s sometime and not at all expensive at the time, but i would never give them up.

I have Dansk stainless steel flatware that belonged to my parents. It has teak handles. The set is now incomplete but whenever it comes up on ebay I seem to miss the auction end. It is no longer very cheap, either!

Nikon F2 (made from '71 to '80, not sure when mines from), but sadly I’d be lying if I said I used it on a weekly basis. But when I’m taking pictures just for my personal joy it’s more satisfying than my DSLR.

Koss Porta Pro. Launched in '84 and still around, unchanged. Mine’s from the early nineteens (yep I’m still youngish, I would hardly know what to do with a head set back in '84).

Oh. And an old clutch style mechanical pencil from my dad. An A.W. Faber “Partout” 4602 that I’ve seen people pay silly money for on ebay.

How much do you use your old stuff? - I used my vintage Canon (from my father in law) from the late 60s EVERY photoshoot. Literally JUST gave in to go digital. I love the manual capabilities and the surprises that you get.

I have a satin Mopar racing jacket from 69 that I wear- Its probably worth a ridiculous amt of money so I am very careful not to stain it or snag it. Yep, single stripe down one side and all.
The car I tinker on - A Dodge Challenger - some could argue that that is timeless.

Honestly I think that we all have a good appreciation for all things designed. Most of that timeless design resides in my kitchen. Utensils, appliances, dinnerware, glasses…After all, design is a tool to improve.

Its tough to delineate between vintage collectibles and timeless design. You collect something because you enjoy the principals of that design.

Just a few staples of design…
I also have a donut phone, and my grandfather’s old swingline stapler that is all streamlined. Sounds familiar. Try to find the model #.

The Donut phone is awesome. It is our bedroom phone. I wanted to have a wired landline in case the power goes out. We actually traded an old beat up 60’s modern chair that Kristina’s parents bought when they first moved in together in the 60’s. It needed so much restoration work so we replaced it with an Eames chair and traded it for the Donut phone.

The Stapler is the “99 Plier”. I remember my grandfather using it even as a kid. When he passed on, I asked if I could have it, and I think everyone else thought I was nuts for wanting this little hand stapler. Same with my Grandmother’s china. My grandparents definitely were down with the postwar Modern. None of their kids (all boomers) like it of course. My grandmothers beautiful German china (just simple white plates with beautiful cross sections) was unwanted, so I nabbed it. 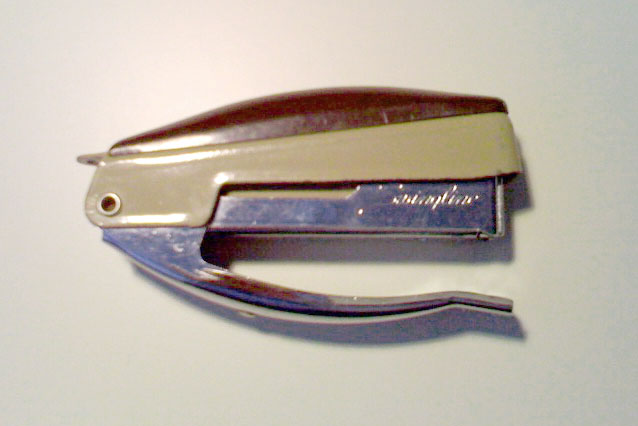 The stapler is nice. I need to find a streamlined one that I have with a faux wood trim. I think I brought it to Canada, but I’m not sure.

I want to see this German modern china everyone is talking about though!

Well, I think its most typical for a designer to be in love with things.

But it`s not the same with the “average” person and Europeans tend
to collect old stuff more. At least my perception.
Sometimes I’d love to get rid of some of our more humble belongings but only to keep a clearer focus on the beloved things:

We even did a project during my studies. Our professor asked the exactly
same question: Bring something timeless to the next lesson. Afterwards he
made us think about longevity and the meaning of inheriting something.

Personally I am sorrounded with things older than me, that I keep in high regard. (My spouse is younger though.) 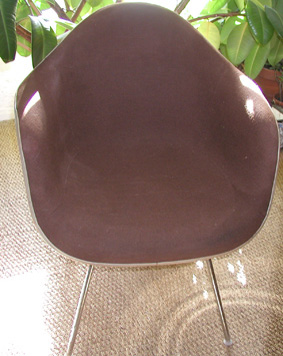 (inherited from my grandparents and in daily use. Same story as with Yo’s
stapler. The family gave me the “he is nuts” view when I asked for the chair…)

I didn’t realise what a materialist I really am before writing it down into that list. Frightening. We should have kids now. But this crisis makes us suspend that wish…

Perhaps. I’ll take some pics during the weekend.
Have a nice and sunny one!

I just remembered one of probably the most overlooked items that stay in houses for years. The big black frying pan. And it cooks perfectly from years of grease and oil, etc… I think the one my mother has is definitely a few generations old. Do they even make them anymore or are they just constantly passed down so there’s no market for a new one? (sarcasm). I do know that I was looking for one and had a hard time finding one new so I guess I have to wait until that dreadful day when I can get my mothers.