where do I go to get my ideas made?

I’m a student and I have a silverware design idea. I was interested in producing them, but not sure what to do. Where would I go to get them made?

as a student, it’s tough

not trying to stomp your dreams here, but it’s very tough, especially if you just have one idea for one set of products

your best bet is to document all your work with specific dates, set up appointments with a major brand (Target for example), have them sign an NDA prior to showing your work, so you’ve really got to be able to sell your idea without even mentioning what it is, and then discuss production. These companies are usually hesitant to agree to an idea like this for many reasons. One example; Target has dozens and dozens of designers working for them. If they sign an NDA, they’re agreeing not to use your idea basically. What if one of their designers had the idea last week / next week?

It’s possible for sure. The common whispers around the ID program at my school were “I have this great idea, I want to get it produced, and I’ll get rich/get recognition/get my product out there” Out of all three options, the best bet is that you will get your product out there, whether they steal it, don’t pay much, or don’t give you much recognition.

Others may have more experience. Its certainly possible via the ‘will = way’ equation.

The first thing I would suggest is to do a little research on the IP side. You want to make sure that your product has not been produced already or even has a patent around it. The last thing you want is to spend a lot of money and time to later find out you infringing on a patent. In the working world we have people to do that for us. For you I would do some Google searches on intellectual properties and patents. There are websites out there where you can look up patenst.

On the flipside if you find out you do have an original idea then you could apply for your own patent and then try to sell it in to the Targets of the world. This then shows that it is a serious idea.

packageID-
I don’t want to be play the role of an overly obsessive spell checker (since I definitely am prone to errors), but since you misspelled the same word 5 times, I thought you might want to know it’s a “patent” not a “paten.”

A “paten” is evidently a small plate or bowl. 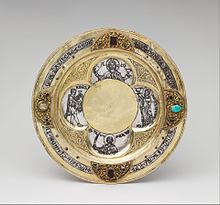 A paten or diskos is a small plate, used during the Mass. It is generally used during the liturgy itself, while the reserved sacrament are stored in the tabernacle in a ciborium. In many Western liturgical denominations, the paten is typically either a simple saucer-like plate or a low bowl. A smaller style paten will often have a depression that allows it to securely sit on top of the chalice, as shown in the illustration on the left here. The General Instruction of the Roman Missal lays down...

But I also wonder if you’re just looking for an answer on how / where to get a prototype made versus how you go about getting a full production run done as the other 2 members assumed.

I think emichi2 is asking for the latter… emichi, yea or nah?

Most major US cities have at least a small foundry company, or metal company that can help with small or large production. Cost, of course, would be an issue.

hahaha. Thanks sorry about that. I usually run a post through a spell check to catch those stupid mistakes. This time spell check worked against me. I feel like a true dumb ass

Making them? What manufacturing method do you need? Google for manufacturers of that technique. It’s obvious, but you’ll save money if you find a manufacturer in China. Be prepared to pay thousands of dollars for tooling. You might cut a deal if you can guarantee a certain volume. Are you planning on selling them yourself?

Here’s a nice site that gives you an overview of flatware manufacturing, and a list of manufacturers: http://www.flatware.org/sterling_silver_flatware_silverware/how_silver_is_made.html

Your other options are to license your design to those manufacturers (not likely unless they’re really, really special/award-winning.)

Your best bet is probably to go work for a flatware manufacturer as a staff or contract designer.

I’m with cg on this one. Try to get your stuff made on someone elses dime. Try to get in with a manufacturer as a designer or freelancer. You’ll make lots of things that should go on the market if they’re good and you won’t have to take the risk of investing. Granted you won’t reap the financial reward as well but for now it’s about getting experience, a name, and real products produced. Also, you’ll have that contact in case you want to go out on your own later and produce your own, you’ll have greater weight and influence if you used to work there and they know your potential for successful designs.

Agreed. That is why design is a powerful partner for business. They have the ability to finance, manage, sell, ship distribute, we have the ability to create. If you try to do it all yourself, you will find about 1% of your time is spent on design tops, the other 99% will be spent on development(coordinating manufacturing) and business (sales/distribution/finance)