When did you become a designer?

As designers we all had an epiphany at some point in our lives; I can make things, if I want.

Mine came when I saw an article about how to build your own wooden car in a 1959 issue of Mechanix Illustrated that my dad had laying around; I was 8 years old. I made stuff, out of wood, all the time down in the basement, and it hit me, I can make a car!! Too bad I wasn’t more impressed by the concept of the “phone of tomorrow” at the lower left of the cover… . . I can’t believe I actually found a cover shot of the issue. Of course, when we’re eight, things are lot easier to do, than they really are.

Edit - reposted the magazine cover. We’ll see if it sticks. 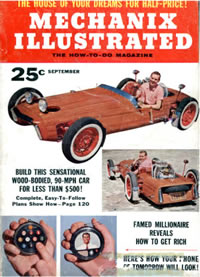 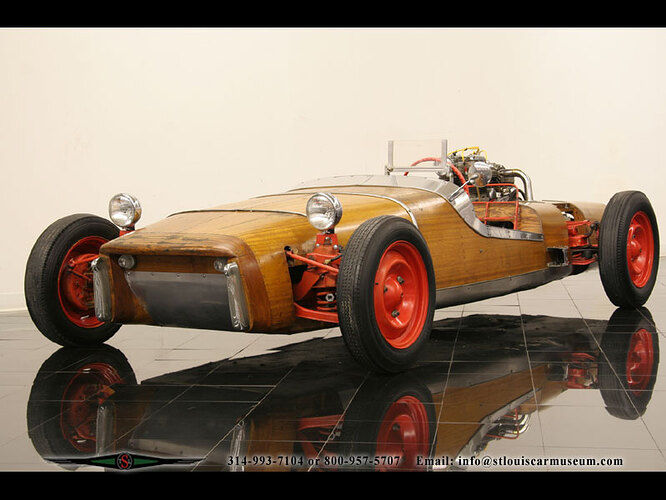 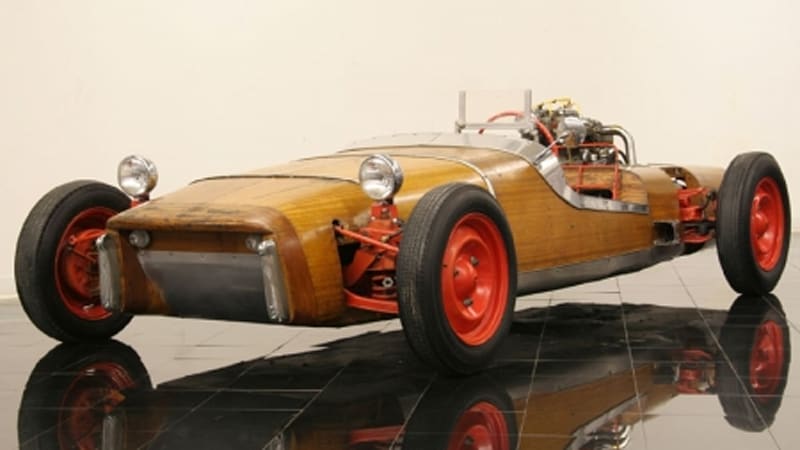 What sparked your choice of vocation?

Wow! Your car is beautiful! I can only imagine the rewarding feeling of the first drive in it.

My design epiphany was an art teacher who told the class to look around the room and said “everything you see started its life as a drawing on a piece of paper.” Two years later it was my brother who gave the industry a name: “Industrial Design”. And I went to college with a goal in mind.

About a year ago, I entertained a passion of mine and went to bike frame building school. Being a bike commuter, it’s about as close to making myself a car as I’ll get. 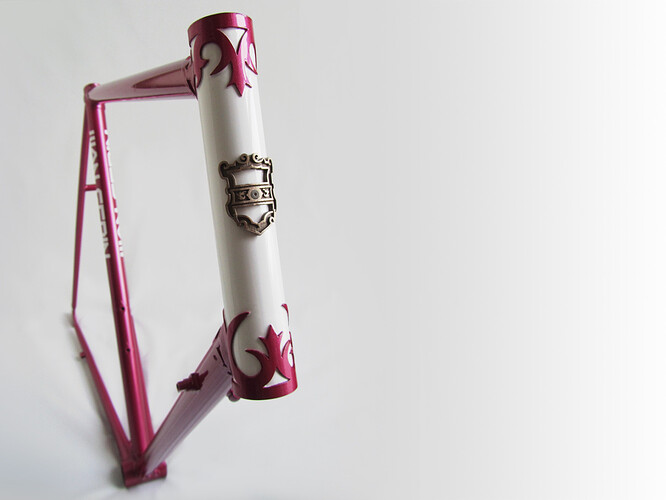 Not MY car Noah … sorry, I did not make that clear. The point, I was trying to make, was that it caused me to come to the realization that I could build anything I wanted.

When I started building blocks, drawing my imaginary bedroom/dinosaurs/spaceships, playing legos, construx, building stuff out of cardboard and duct tape, when my 5th grade teacher would give us assignments like ‘draw yourself in this imaginary scenario.’ Unreal, especially compared to the declined state of today’s elementary schools in the US. I was so fortunate to have those elementary school classes plant a seed that middle school and high school weren’t strong enough to kill. =)

Little mo-i must have been around the same age as you two.

When I was 5 I constanstly crashed and reassembled (sort off) my model cars, until mum took
them away. When I was 8 I hacked them more artfully and tweaked them with play dough.
Too bad there are no pictures, as I particularly remember a Citroen Dyane, which I streamlined
that way. (The dough never really glued to the tin metal of the mayorette.)

Funny that it took an additional 5 years until a buddy (Jan) told me for the first time, that this
was actually a job named “industrial design”. So grown ups could work in the candystore and get
paid to do so ? Wow!

edit: Not matchbox, not mayorette, not Norev, but Corgi Junior:

My grandfather worked in the design department at GM. My mother and father met at CCS. My father had a full workshop with everything from ceramic kilns to bronze sand casting to wood working. Clay and plaster and molding was something surrounding me as a child that was there from the beginning.

The moment I remember was about the same age as Lew, 8 or so. My year younger brother was trying to make a mold off a small kitschy blow molded cat figurine by submerging it halfway into a box filled with plaster. Everything we had molded up until that point had planar parting lines. My father took a look at this complex parting line and said, “Let me show you something”.

He took the cat and built the parting line in clay, curved and wrapped and smooth. Then cast one side in plaster and then the other. The completed mold did identical slip cast clay cats. Then he encouraged us to make something of our own. A certain light came on regarding industrial production.

I became a designer much later.

1976 Olympics in Innsbruck Austria. Franz Klammer’s downhill to win the gold was spectacular. I was fascinated with the ski jump. So I went downstairs and destroyed my sled which was essentially a rolled piece of blue PE about 0.100" thick. I made a wood frame and used the plastic as the ramp. Some how I glued a piece of wood strip down the middle to act as a guide.

I carved a jumper out of wood and made wood skis. The jumper was in the prone in-flight position so it did look “wrong” when it went down the ramp. I put it on our deck which was about a meter above ground level. I piled up snow to be a landing ramp.

And I’ll be damned if it didn’t work. The jumper jumped, landed and went down the landing ramp, over and over again. It didn’t twist or flip or anything. Quite frankly, I was astonished, even at 10 I didn’t hold much hope of it working properly.

I was hooked. I had an idea and I implemented it. I wish my stuff now only worked as well.

I was hooked. I had an idea and I implemented it. I wish my stuff now only worked as well. >

That one really cracked me up: 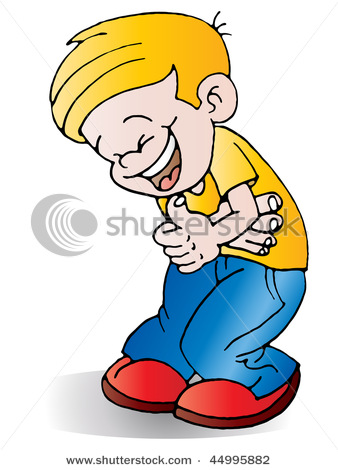 I always like tearing toys apart to see how they worked and creating stuff with lego, meccano or just putting stuff together myself. I remember creating small electrical boats with spare parts from old toys, redesigning the scalextric cars and tracks, putting together wooden pieces to create vehicles, etc. I was pretty sure I wanted to be an architect or a mechanical engineer and then my best friend told me she was going to study ID. At that time, I didn’t know anything about ID, did some research and found out it was exactly what I was looking for.

My dad was a self-trained architect/interior designer/industrial designer/draftsman/sculpture/painter/graphic artist. I’m the lazy gen-x offspring that only does the ID part

Then again, I have another 30-40 years at least to diversify.

I don’t really know how I became a designer, but here’s my trail of ideas that lead up to ID school: Fascination with a toy parachute that my dad made me at 8, Tearing apart everything I owned since age 9, drawing my own comic books between age 12-16. Honestly, I think I would have enjoyed other professions as much, but seeing my dad work made it seem like the most obvious thing to do.

Also always tearing toys apart. I remember I was deconstructing my Star Wars walking AT-ST (the 2 legged version of the AT-AT) because I was fascinated by the spring mechanism. I got the central housing apart and springs and gears shot out everywhere… I never got that one all the way back together again… the usual lots of legos, trying to hack stuff together, and drawing.

The defining moment came when I was 13, I told my parents I wanted to “draw stuff from the future” for my job. Luckily came across a newspaper article about Giorgetto Giugiaro and learned it was called industrial design… a few weeks after that I came across Dick Powell’s “Design and Rendering Techniques” in a Brentano’s Bookstore, a very lucky find. That Christmas I asked for a drafting table, a T Square, a set of triangles and a set of prism color markers for Christmas. It was a defining year.

Interesting how many who answered had fathers who were designers, engineers, etc. My dad was a draftsman/inventor early in his career and showed me how to look at how things worked. That and Lego pretty much defined my eventual career path.

that was a test Chris

Of course did the LEGO thing. Made my own halloween costumes with my Dad, often pretty complex, like a robot suit wired with LEDs and switches that did things.

In grade 4, I started my first design consultancy. SDP. Signs, Designs and Pictures. At first, I did custom “graphic design”, like if a kid wanted a birthday party invite with a unicorn on it and some text, I would draw it and they could choose the font from a book of typefaces I had (no idea where that came from). I then branched out to product design, making useful school supplies by doing things like gluing a pencil sharpener onto a ruler… I think I made enough profit to buy a couple of new markers…

I tried to make a Johnny 5 Roboto from Short Circuit by taking apart a record player I found in the trash and rewiring it with some other toys., I just electrocuted myself.

I was fortunate enough to have supper supportive parents. I went to an arts school (kinda like Fame, we did everything. Visual Art, Dance, Music, Drama + all normal academics. Public but by audition only, dunno how that works) in grade 7 and then transitioned into a similar arts program in high school.

I always thought I wanted to be an Architect. Then I found out about ID from a kid who graduated from my same arts program a year earlier. Applied to both Architecture and ID and went to visit the ID school on March break. School Director convinced me ID was better as it was more democratic. People choose the ID things you make. Most people don’t choose the building they work in… I liked the idea of connecting more personally to people through design.

Cool story Richard. That SPD thing is awesome. You were always a creative capitalist!

About a year ago, I entertained a passion of mine and went to bike frame building school. Being a bike commuter, it’s about as close to making myself a car as I’ll get.

Some nice lug work there, Noah.

I love how legos are so integral to a lot of us. I am still regretful that I never really learned how to do more with the Lego Mindstorms (the robotic ones).

Probably the closest to ID for me was starting around age 12. My dad got me my first Swiss army knife and I tried making a bow. At first, my bows didn’t have any profile, they were just a sapling bent in a curve, or a stick with an elastic band. I have always had an interest in the past (anything from Paleolithic to Renaissance) and thanks to the World Wide Web, found about about similar, but less well known tools, like the sling (think David and Goliath, not a slingshot) and atlatl (spearthrower). While I was trying to improve each previous model, I was prototyping without realizing it! In a way, I made more with my hands back then, before I was in ID.