What's the Process Used to Make the Grips on a GoPro?

I’m recently designing a part that I want to use the same grip feature as a GoPro. (See below for reference) 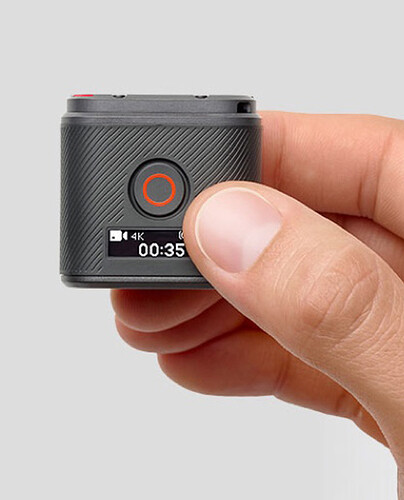 I’ve talked with my engineer colleagues but they’re pretty convinced doing so would be cost prohibiting. One of them believes that this is done through injection molding with in-mold features; the reason behind why it’s so expensive is due to the fact that thin line grooves wears down too fast in a mold, and it needs to be de-molded in a sort of “spiral” motion. Sure it makes sense what he’s saying but I’m convinced that GoPro would have a slightly different but better process.

Although currently we’re going with a different BORING grip feature (textured select from crappy supplier eww) I’m really inclined personally to do something similar to the GoPro grip. And I think with the right convincing this decision could be made once I have enough evidence. Thanks for helping out guys!

P.S.
Here’s a little bit of information sharing regarding the part (I can’t show it due to obvious reasons), but I can describe it hopefully well enough.
A-side: conic shape, D 33 to 29 mm (proximal to distal), height of 35 mm, fading character lines on both sides also serves as surface breaks, textured grip will be between the two lines and connecting, use motion is twisting to lock & release.
B-side: has locking mechanism, spring system built-in.
Material: currently Nylon (I’m thinking of having rubberized or rubber part hardness maybe Shore A 90? If anything over-mold could be considered, but then again $$$)

It can be done with side cams, without driving up the cost enormously. Parting line flash can cryogenically almost become invisible. I saw this pattern on a flashlight once, with the density of lines mapped to a sinusoid - very nice feature!

You’re showing renders which probably freaks them out because that’s not how the real part looks and they know they won’t achieve that level of perfection.

Check this out and you can see theres clearly flash lines where the top and side pulls meet:

From the CAD process this means that those grooves need to be molded with draft in direction of each of their cores and manually lined up as close as possible. Also, IIRC the Gopro is overmold, meaning tool wear should be less of an issue on the soft material. If you are trying to do that with a rigid material it isn’t as much of an issue, but the area where those two tools meet will need to be modeled very carefully with draft.

Thanks Ralph! Do you happen to have a picture of the flashlight you’re talking about? As for the side action cam, I’m wondering if it’s still doable if each lines are grooves are long enough to wrap around (diagonally) the part covering 240 - 300 degrees of the surface. Not sure if I’ve explained it clearly…

I’ve booked time with another ME tomorrow to find some answers too, will report back with findings!

You’re showing renders which probably freaks them out because that’s not how the real part looks and they know they won’t achieve that level of perfection.

That’s true. But I do wonder how deep and crisp I can go. The real GoPro photo of the feature helps a lot, thanks!
And yes, I’m looking to use a softer material for over-molding.

The depth and crispness should keep in mind:

-What texture are you applying over this molded in feature? IE if you use a specific Moldtech texture, gloss finish those will have a minimum required draft. That draft angle will determine how deep you can get before that steel is too sharp or thin. You also need to account if you add an in-mold texture on top that will wear away some of the delicacy of the feature.

In general though this seems fairly achievable and even if they say it’s “Too thin” you just need to bulk up the bottom of the valley and adjust the top pattern accordingly. You should get the molding guys buy in from all that before spending time drafting all the CAD, because it could be a pain in the but to model multiple times over. We often had to do this type of work for things like wrapping speaker grilles which would have holes pulled by two different pieces of steel but needed to look visually consistent.