What to do with bicycle concept?

I’ve just completed a revised version of my Rael concept road bike (Rael stands for Research and Engineering Lab, by the way.) There are some pretty novel features to it, some of which are probably patentable. I’ve shown it to a few industry insiders and there is huge interest. Now, what do I do?

Please keep in mind I’ve already designed a few bikes for one company so I have some experience in the field. Also, I’m not looking for a full-time position anywhere as I’m busy with Cerevellum (see elsewhere.) However, I’d love to be a consultant with a major manufacturer in order to get some parts of the Rael2 into production.

I’ve put a TON of work into this project and I think it has some serious merit. I raced nearly pro for about 15 years so I “get it.” This isn’t yet another fixie, city bike. It’s a complete rethink on how many cycling components and frames are done. I’m proud of it and want to show it off, get some constructive feedback and, best of all, generate renewed interest into the technology behind the sport.

Got a friend with an MBA that knows how to write a good business plan?

Short of making a full-size proto and displaying it at Interbike, I’m not sure where you could take it to really make things happen.

Try to raise a million dollars on kickstarter and start your own company.
Actually, do you have any idea what it would cost to start producing your concept?

Since it’s taken me 2.5 years to get funding for Cerevellum (half a million dollars,) I’m pretty experienced in what it takes to start a new company. I don’t have the time or energy to do that as I’m focused on Cerevellum first and foremost.

Because of some of my connections in the cycling industry, I do have a general idea on what it would take to get it completely developed. It’s…a lot. Mainly because it’s not just another carbon-fiber frame. Rather, it’s components AND the frame combined together. I can only think that a collaboration with a company like SRAM (drivetrain, wheels from Zipp, etc.) would work.

So, let’s assume I want to present it to SRAM. What would I need to do first in order to protect the design?

What would I need to do first in order to protect the design?

An ornamental patent, for starters, which is intended to just protect your ‘trade dress’ or the aesthetic component of your design. Utility patents cost at least ten times more, but go further in ‘protecting’ your work. Of course all this IP is worthless unless you have the lawyers and money to fight it out in court.

Is there any real value to be obtained from showing the project off to the general public, in competitions or on the web? My answer would be ‘no’, not the kind of value you want, which I understand to be either:

My approach would be to keep it VERY low-key, develop relationships with bike companies who are both reputable and have interest in innovation like this (I’m thinking maybe Cannondale, Trek, Specialized…the big co’s), and try to arrange a meeting with a lead engineer or project mgr there.

My company gets a few dozen invention submissions a month. Most are answered with a form letter. Unless the inventor has done a lot of legwork to make a well-functioning proof-of-concept, why should we bother with humoring his (or her) imaginary product? Why should we drop everything in the pipeline and schedule for the next 2-3 years to spend R&D resources on trying to productize vaporware? We also tend to treat the inventors who DO do the work, with great respect, and have made millionaires out of a handful of them. That’s why you want to deal with a reputable company. Your insider networking should be able to ascertain what the attitude toward inventors is like at a given company. Spending the money on prototypes will be more valuable than IP.

Decided to publish the design at http://www.raelbicycles.com. I’ve included a few images of the concept Rael 2 here (it’s actually the revised version.) Right now, I’m trying to get enough funding to get a working prototype made and looking at partnering with an engineering school program to get the bearings created. All in all, the entire concept is certainly do-able. 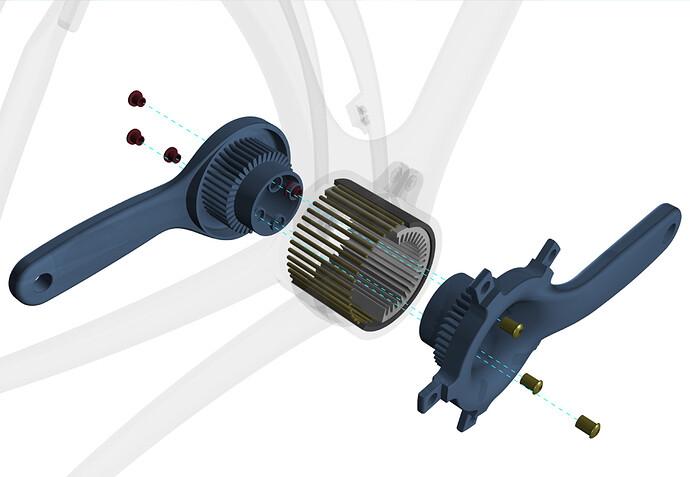 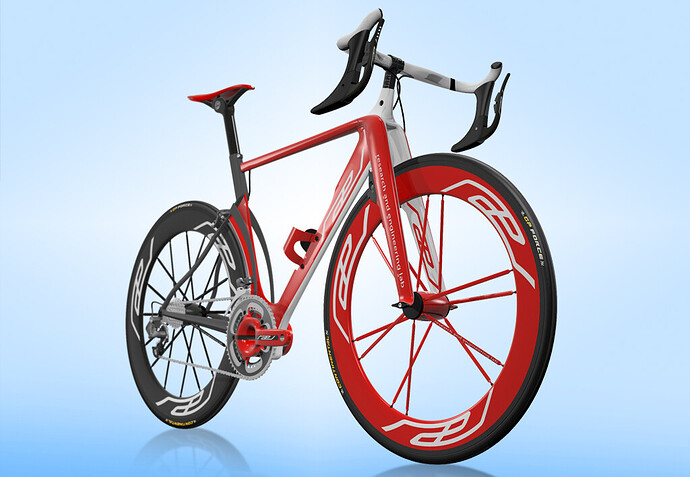 Hot man, the new rev looks really nice. Going to get this on the front page if that is OK. 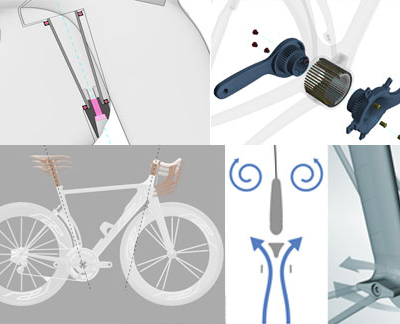 We've seen a multitude of bicycle concepts here on Core77, but perhaps none as fully worked out for manufacturing as designer Evan Solida's "Rael." The amount of thoughtfulness put into this bike is unparalleled, as can only be done by someone with...

How are you going to get even tension in the front with the assymetrical spoke pattern?

If this is a race bike, why wouldn’t you be in the drops when descending?

The only issue I have with this concept, is one I’ve had all along.

How do I get fore/aft adjustment with the stem/bars?

It looks to me that in order to stretch out farther away from the saddle I have to raise it up, which for many riders may not be the most comfortable position for them. For me, it would be perfect as I have a longish torso and some what shorter arms. Many racers are the complete opposite. Longer arms allow for much more significant saddle/bar height differences, and many prefer longer stems (110, 120 even 130)

How does your concept address this?

NURB…very good question and one that I should have addressed on the website. The stem can can have a clamp off-set just like a seatpost. While the stem extension remains consistent (just like a seatpost shaft,) the head can be offset. It’s also flip-able so that the bar can be closer to the rider or further away. Again, just like how seatposts are made with zero offset and with offset. Only 2 stems would be needed; one completely straight and one offset.

[quote=“iab”]1. I get it. The fork was throwing my perspective of the symmetry. But 12 total? I may exceed your weight limit.

Heck, I exceed the weight limit!! When I was racing, I was sitting at 4.5% body-fat and now need disc-brakes from a car to stop me!

Braking in the drops would be similar to braking while riding on the hoods with current systems. Definitely good enough (as long as you’re riding Dura-Ace brakes and not Campy!!) ha ha ha.

The ends of the bars curve inward so they shouldn’t present a problem. That said, I was in a crash back in collegiate racing when an STI lever took out a chunk of my posterior, so it’s inevitable that someone will eventually be injured by them. I got hit so hard from behind that my foot was ripped out of my Sidi’s!

Decided to publish the design at http://www.raelbicycles.com. I’ve included a few images of the concept Rael 2 here (it’s actually the revised version.) Right now, I’m trying to get enough funding to get a working prototype made and looking at partnering with an engineering school program to get the bearings created. All in all, the entire concept is certainly do-able.

Looking at the design of the cranks and bottom bracket assembly brings to mind a few questions. The first question is regarding lateral load adjustment/tolerance to account for inconsistencies from frame to frame related to symmetricality [yes I know this isn’t a word you’ll find in the dictionary] of bottom bracket shells. Even after frame bottom bracket shells a professionally faced they are not always perfect. This is why for example Campagnolo uses a wave washer in their Ultra-Torque system. Also, I see a potential issue in binding the two side of the crank together with four bolts rather than one larger center bolt. The reason being that I suspect it would be very difficult to tighten the four bolts to a precisely symmetrical and equal amount that keep the two half-shafts perfectly straight. If there were to be any kink in that alignment I suspect there would be a problem with binding even if the assembly includes a wave-washer. The third question is regarding the way the teeth on the half-shafts mesh with the teeth on the inner bearing race or bushing. When the half-shafts are linked do their teeth engage with the teeth on the bearing assembly across the full width of the BB or only partially? If only partially, why?

Bottom line question: Have you worked with an engineer on this yet?


P.S. I’d like to see more details pertaining to how the reach, rise and angle of the stem and handle bar assembly works.