what is the easiest country for running a design business

What is the easiest country for running a design business? I mean a business where the primary activity is design.

But simply using COROLOT Design Firms filters for Industrial Design and Country would indicate that, at least from a numerical standpoint, of the total 2,444 registered firms, the United States is leading with 936 … this of course means absolutely nothing with regard to “easiest”.

In fact, given the state of “government” meddling here in the States, it probably says more about the mettle of the individual entrepreneur than the industry. 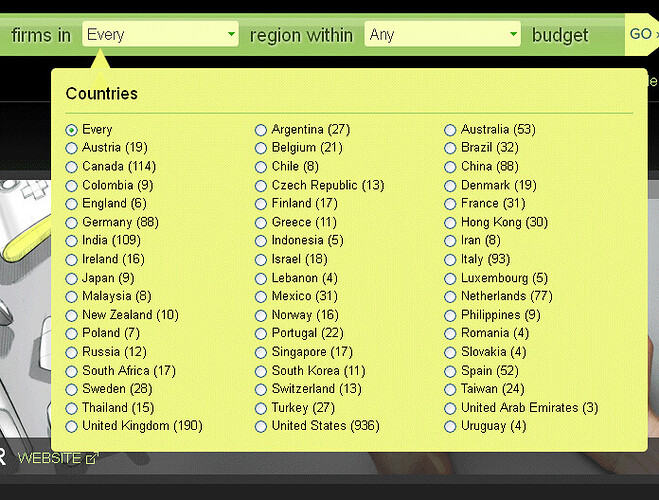 Thanks a lot for your reply. I haven’t defined enough parameters in my question, but you have put me on a good enough path to answer my question. Consider this thread to be closed, unless you want to add something to it

I would tend to say around NYC, SF, LA, London or Paris. The country isn’t as important as being close to clients and being able to build relationships that lead to business. In other words, you are probably better off starting your company wherever you are, if you have some potential clients. If you are starting from nothing, a move to one of the above cities will at least give you a pool of potential clients.

Again using COROFLOT ezample above, if you move one more “field” to the right to “Region within” you can filter them by city which might give you more insight.

Look for major industry hubs, Munich, Stuttgart, Cologne or Ruhr Area in Germany would be also a good places. Eindhoven / Rotterdam in the Netherlands; Milan or Turin in Italy; Catalonia in Spain (Not at the moment, but used to be). In China I’d say Shanghai, Shenzen or Hangzhou. You’ll need IDers wherever you can find manufacturing areas.

One thing, when you said design business, do you mean industrial, graphic, interface?