What is good to see in Shanghai?

Hello for those in Shanghai!

I am going to be in town for a few days, I’ve request a few more days aside from meetings to stay in the city and explore. Any suggestions? Clubs, Bars, Galleries, off the hook exhibits?
Some one was telling me about M1NT…

I am originally from Hong Kong, So nothing Chinese will scare me.

Hi,
I think the world Expo starts soon - should be pretty good

Thanks for yr advice…
I am going to be in SH for the first few days of the Expo, and I’ve seen chaotic scene of mainland Chinese cutting lines and steping over each other for the expo trail day on the News. With the ticket cost over 800RMB ( orginally $200) I don’t know if it’s worth the “danger” since I will be back to Shanghai matter of 1-2 months.

How about good art scene? Do you know any?

I agree about the “danger”. I went to the SH auto show last year and almost got trampled to death in front of the Ferrari stand. Unbelievable.

I’ve been to SH a few times for conferences. The Bund at night is cool. Also the bars at Xin Tian Di are nice. A little touristy, but fun. I can’t tell you about the true arts scene. Maybe a local can share?

Death in front of a Ferrari… What a headline on the news. lol

Thanks for your advice.

I’m trambled when taking subway everyday in Beijing… I’ve been several times to SH, Bund is nice… there are now transforming it into a pedestrian zone for the Expo… and the view on the Huangpu river and Pudong area is nice. Nanjing Lu is nice to walk in, there are some bars on building tops, Huahai lu as well…

I like the Puxi side of Shanghai, is also nice to walk randomly and watch life and stumbled into underground things. Because official museums or galleries aren’t so nice. I would refrain from visiting the Expo the first days, wait a little bit is best.

You must take the mag-lev train from the airport to Pudong. It is the only one in the world. So, it doesn’t drop you off in the middle of town, there are plenty of taxis at the station.

I agree definitely with Tim’s recommendation of the MagLev! It’s a real high if you’re at all jet-lagged.
The state art museum carries an extensive exhibit of early art and writings, if only to begin to understand the transition that styles of expression have gone through- and are continuing to evolve.

The Shanghai World Financial Center, as one of the tallest buildings, certainly one of the most elegant. Go ahead and take the elevator trip to the top bridge. At dusk, -or dawn-, the view will give you an idea of the scale of the city. Built by Japanese interests, the original plans for the building carried a circular opening at the top, . . . vetoed by the Chinese as being too symbolic of Japanese imperialism, was changed to a square opening after construction had begun.

The Yu Garden, the emperor’s summer palace. Unchanged for hundreds of years, an impressive example of a compact serpentine garden with a wide variety of symbolic stone-work detailing and extensive Koi-ponds. Temple at the gate is still active with an endless parade of people engaged with their worship. It was here that I began to understand the complexity of China’s culture.

The German sector along the west-side of the river carries western styled night-clubs, but I enjoyed the street vendors and the tasty sampling available in the blocks-long outdoor food markets. They probably run 24-hours a day, with everything imaginable, and quite a bit that was completely out of my exprience! Awesome!

The discovery of Xiantindi Plaza gave me a hint of the depth of western-leaning aspirations for style and design of China. The Chinese are creating their own expressions of style and taste. Shanghai Tang stands out as one of the most visible high-quality fashion houses. (think gifts for significant others) Though I wish I more time to do more exploring to find and meet the emerging talent and see their work.
-Dale

Woooow! Thanks yall! These sounds all so exciting! Now I have to decide what I can do with so little time aside from meetings!

Crepes, you should try these crepes. 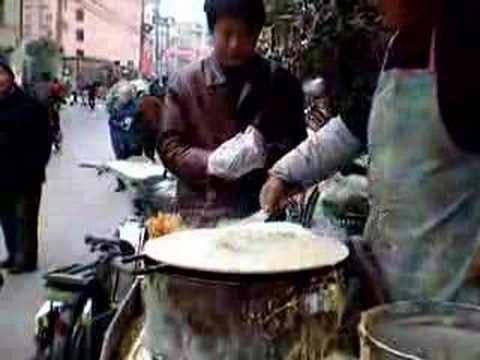