what do you think about Studebaker?

if you were a car design student Or a product student. what’s your opinion on working for studebaker?

There is a reason the Studebaker was called “Stupid Baker”.

That question makes no sense…

Are you looking for the opinions of students who interned at Studebaker?

Are you asking “former students” (aka professional designers) their opinion of what they thought it was like working at Studebaker?

Are you asking what working at Studebaker implied in terms of stature as a designer?

Also, in the context of car-design, obviously Studebaker was made famous not for its in-house design, but for Raymond Loewy’s consulting. So is the question “what was it like to work with Studebaker?”

i might be worng, but im under the impression that studebaker is still around, but the name itself is owned by avanti motor corp :
didnt they get sued by GM for making a xuv that looked too much like the hummer? 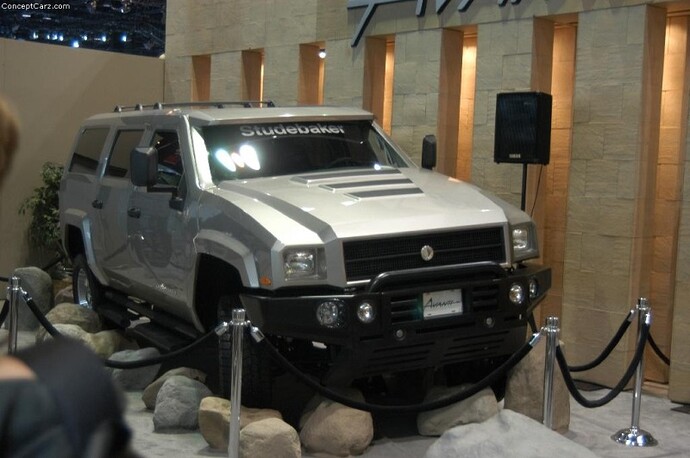 since nobody really knows about it.
Probably shouldn’t say too much .

in the context of VEHICLE design, in the 1800’s, Studebaker Brothers were outstanding in their design, manufacture, and marketing of horse-drawn buggies, farm wagons, and utility vehicles.

and that ain’t no horse sh*t

Being a Studebaker fan I had to look into this post. Shouldn’t I be…how many designers named Raymond are there? Anyways…

Avanti was an excellent exterior design. Very original form in the front end, and the proportions were very lithe for an American car. Of course, poor quality control was going to doom the poor company.

I took a look at that Avantimotors.com page. I hope that “XUV” is a joke. Loewy has to be rolling in his grave. It does look like a Hummer copy too. Why…who knows? Lambo and Mercedes both make wild off roads with different aesthetic details. Lazy… I did notice though the 904 replica on this site. Perhaps they are a kit car maker that bought the name? That 904 replica is supposed to be a wild ride from what I’ve read in old Panorama and other P-car rags! Lastly…their Avanti…it looks like a Firebird with a different front pasted on. Horrible proportions and a serious like of coherency! Ick!

About the portfolio that YKH posted…maybe I’m just an old stick in the mud, but what made that guys senior project a Studebaker other than the lettering? Where’s a bullet nose or weirdly shaped wings?

not sure how you figure i’m talking design here, 914.

just wondering how many 2004 grads have a thesis on Studebaker. bit odd imo. is this a car-company sponsored project? did someone buy the brand name? original poster hints that something is up with the brand. i’m just not assuming “I am” is ignorant of Avanti/Studebaker history. most everyone here is doing that.

I understood YKH. If I were a transportation design student I would certainly like a challenge like envisioning where a brand like Studebaker is. I think that’s why this student did his project on Studebaker.

Indeed something is up with Studebaker/Avanti. I looked at that website a bit further. It wouldn’t surprise me if the company is looking at hiring a few designers to smooth out their designs.

BTW: current Avanti is a rebodied F-body GM (Camaro/Firebird). The company will probably be searching for a new chassis, perhaps Mustang? It was a good idea…the F-body is composed mostly of plastic wings and bits…very easy to attach a different body. It reminds me of Zimmer in the '80’s. He did a car based on the Fiero which was one of the earlier plastic bodied cars.

Somewhere in Milwaukee and involving Pabst.

cg: hehe I’m sure of that! I think I had one too many Schlitz before writing that last post. I meant, “envisioning where a brand like Studebaker would be”.

a four minute google search versus a three minute revealed this…

Apparently not affiliated with the Avanti group.

I’m surprised the thread went so far with no one finding what the kid was asking about.

THANK YOU!
That’s excactly what I was talking about!

STUDEBKAER MOTOR COMPANY,INC Is it’s own copmany, it is not owned by Avanti Motor Corp. Studebaker is listed with the US Government has a vehicle and motorcycle manufacture.
www.studebakermotorcompany.com

GET YOUR INFORMATION RIGHT!!

have you emailed Studebaker Motor Company to ask them for work?
I read somewhere were they are getting ready to move to new offices.