Here’s a question - what aspects of a toy impress you, from a design perspective? Whether you’re an urban vinyl aficionado, retro action figure collector, or just a parent looking for quality product, what are some examples of good design in toys? 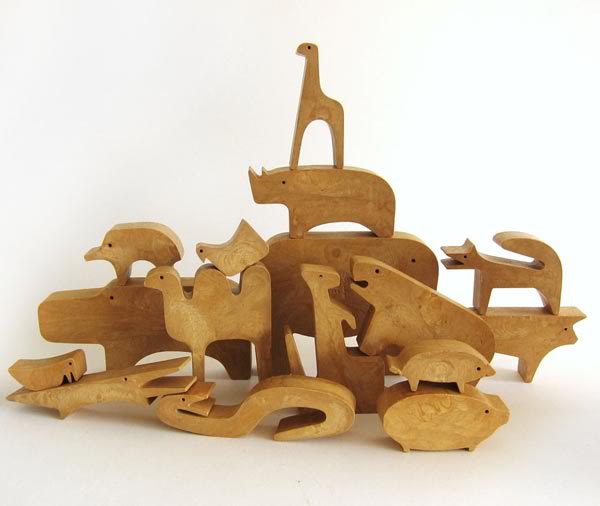 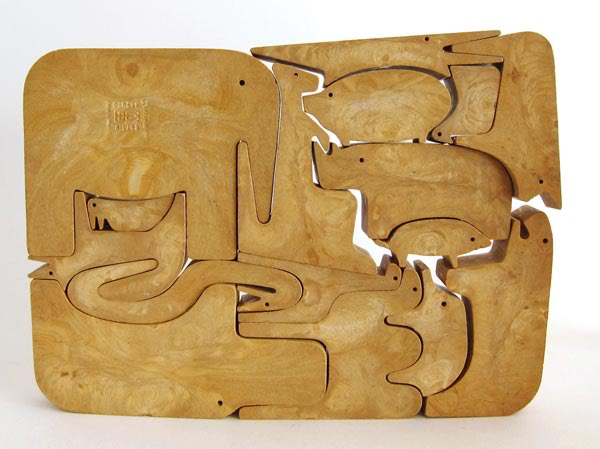 Classic Example - Enzo Mari Animal puzzles. I can remember playing with these at a very young age, and still have them somewhere.

Lots of play value here, as it is both a puzzle and a set of characters for imaginative play. Comes in a wooden box for easy storage, which I’ve been told is an important feature which a lot of parents look for.

I have a two and a half year old, so my take on his behalf is a true understanding of toddler dexterity and what their relative level of ‘success’ in play might be. He can get frustrated quickly if things don’t go together or need perfect alignment - even Duplo (big Lego) requires that planes be parallel and correct assembly doesn’t come with overt feedback. I like multi-use toys that inspire imagination, are durable, and without too much of a designer’s ‘hand’ involved. Give a kid a silicone spatula and you are set for an hour.

I distinctly remember a set of “alphabet blocks” that were kept in the front hall closet at my grandparent’s house. My grandfather was quite the woodworker and I was told at a later age that he had made them for mom and her sister (my aunt). So they got a lot of use.

These are not the blocks I had but are close. 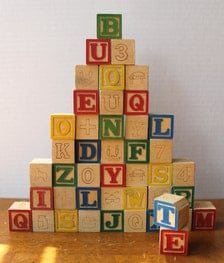 At some age… 3-4 (?) I was given some large corrugated-cardboard bricks. Physical dimensions I have no idea, but I recall they seemed really big to me.

And then I was introduced to cardboard boxes and masking tape … 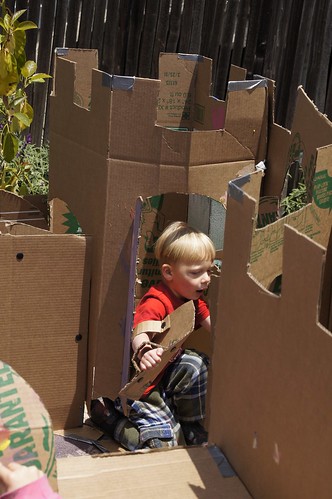 I recently rediscovered Lego. The basic building system is incredible, and as an adult, Technics offers more advanced mechanics. They’re so much fun, I’m re-addicted. Most kits come with an alternative model out of the box, but all can be rebuilt and mixed together however desired. 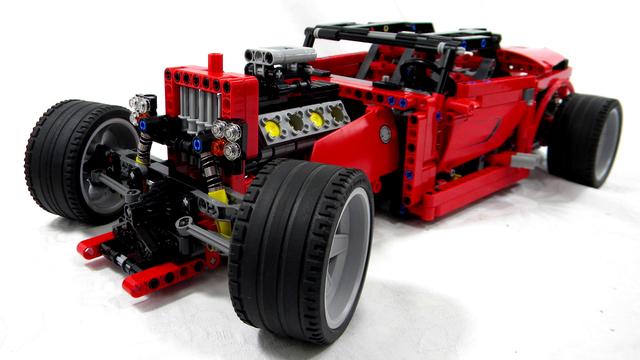 It has a power-convertible top and suicide doors operated via the center console shifter. Functional steering, V8, suspension, and rear differential…

I kept seeing this toy walking past the school museum store and it keeps catching my eye. I haven’t actually touched it and it’s a little pricey but it’s got good Amazon reviews for what it is … and something about the Euro-ish styling is awesome.

There’s also a plane and car at https://www.kidoproducts.com/shop/toys/vehicles-0

And then I was introduced to cardboard boxes and masking tape …

Building forts was always fun. I remember we got a new fridge as a kid and the box it came in was just about the best toy ever. It was a helicopter, submarine, and hideout, at different times.

Reminds me of this kickstarter - I love the idea
http://www.kickstarter.com/projects/1767027342/squishy-forts-pillow-fort-construction-kits

That Enzo Mari puzzle is brilliant, thanks for sharing.

I think different toys definitely suit different children with different character dispositions. I was always a Lego kid, but some of my friends liked Playmobil more and other played mostly with action figures. So it’s hard to generalize and say what the best toy is.
I also always liked animals and loved Lego’s Fabuland products. They were only produced for 2 years though so must have not been very popular. It’s maybe a bit happy and gay, but I liked it - hey I even had the barbie car. I wonder if Fabuland has ever even been sold in the US. 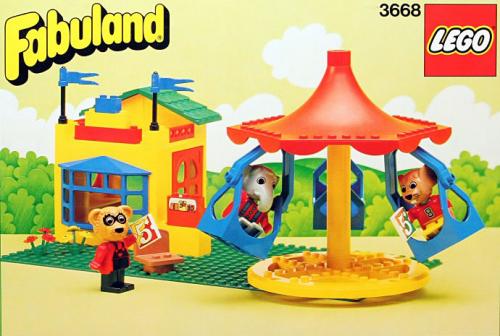 I also loved the Jurassic Park toys when they came out, yes it has a touch of consumeristic crap, but it was well done for what it was - well colored, the material felt nice, and you could take a chunk of meat out of the herbivores. 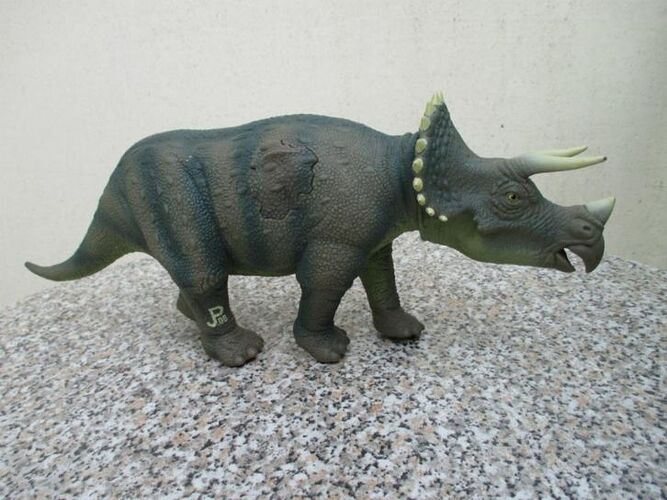 $T2eC16d,!zcE9s4g3hi,BSFb+SOT1w~~60_85.JPG726×544 67 KB
Recently I’ve been liking brands like Brio and Tegu, but I wonder how appealing they actually are to children themselves. Some toys have a more reserved style to them which may appeal to adults as they seem to stimulate more of the intellect rather than pure basic emotion and instinct, but I think for little children a lot of stimulation can also be a good thing. Then comes a time where they use more of their own imagination, and later they’ll use the intellect more. 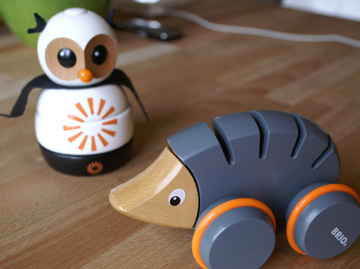 Hello,
[u]Best Meal Replacement Shakes[/u]
I’ve always loved lego but then you grow up and leave those amazing moments for the past. Now I have started to play again as my nephews love it. I’ve never tried technics but I’m probably buying one to enjoy it with my nephews. Thanks for the post.
[u]WoW Gold Tycoon[/u][u]Best Phone Grip[/u]

Recently my 2 yr old has gotten Green Toys as gifts. They toys are simple but well designed, chunky and fun. I think they are popular because they are made out of recycled plastic, the packaging is simple cardboard with single color printing.

As a father of 2 I have buckets and buckets of branded toys, very colorful, with lots of stickers and buttons that make obnoxious noises. Getting the Green Toys was a bit refreshing…loved the simplicity and they are very durable. Their simplicity makes them stand out.

I also got them Lincoln Logs. Again, simple toys that make them be creative. Lego’s too but I don’t like the pre-determined models you can build.

I’ve always been a huge LEGO fan. I regret selling my collection as a kid (who knows what I bought for that 40-50 bucks but it definitely wasn’t worth it!!)

In 1995 I developed an exploding concept for LEGO (their Boston MIT-cooperative office was awesome!) and they implemented it several years later in a few kits. 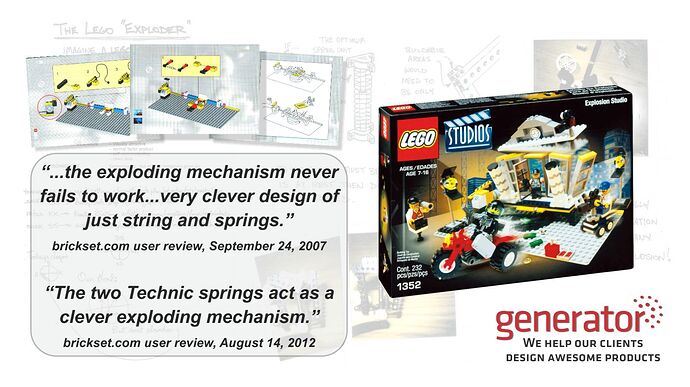 Yeah, my first thought was that they looked cheap and were relying on the “green” marketing. But then as I opened the package and examined the toy I saw that they were pretty well made and somebody spent a lot of time 3D modeling all the surfaces just right. The simplicity of the toys and packaging as well as the attention to detail makes them great toys.

Packaging is another nightmare. I now have dedicated pliers, scissors and screwdrivers just for opening toy packages and replacing batteries. They now use wires, clear invisible rubber bands, tape, hard plastic cam locking features, you name it. It’s awful struggling with a package and having a 2 and 5 year old waiting next to you until you finish.

The green toys packaging is great. Simple folded box. No color printing or inserts or stickers. Just a straight forward box. Here another cool one. 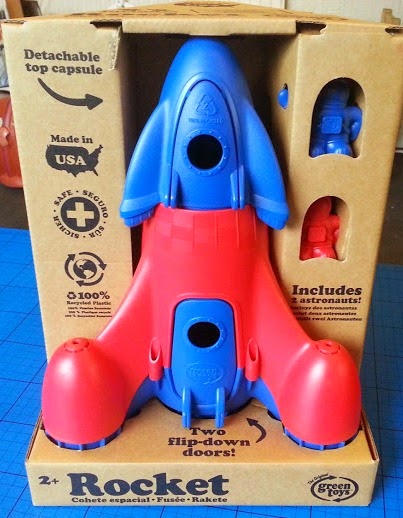 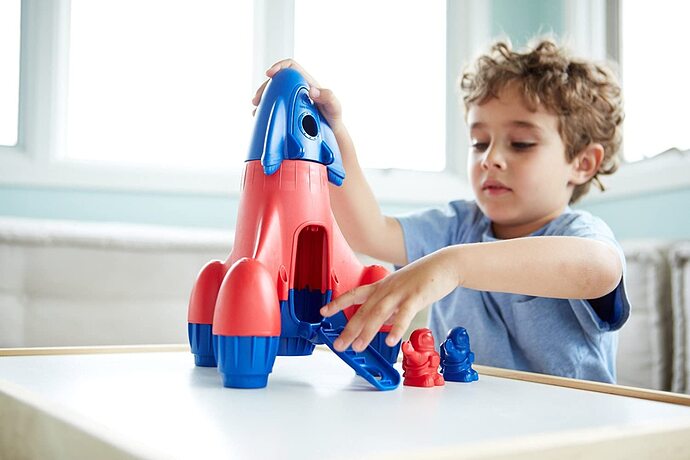 My wife has been buying a lot of their stuff recently. Really well built and thought out. Our dump truck has taken a literal beating out in the driveway and still looks fine. Another thing that they offer (which is why we purchased the first one) is a female colorway for ‘masculine’ products. We have the dump truck and tool set in pink. It is nice to see a company considering that all girls dont want to play with only dolls (mine carries the hammer around instead of her doll) 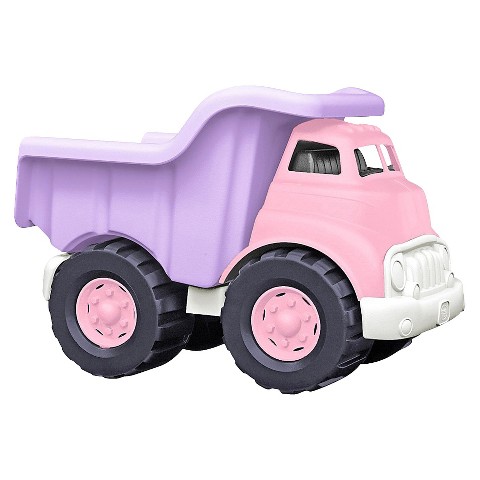 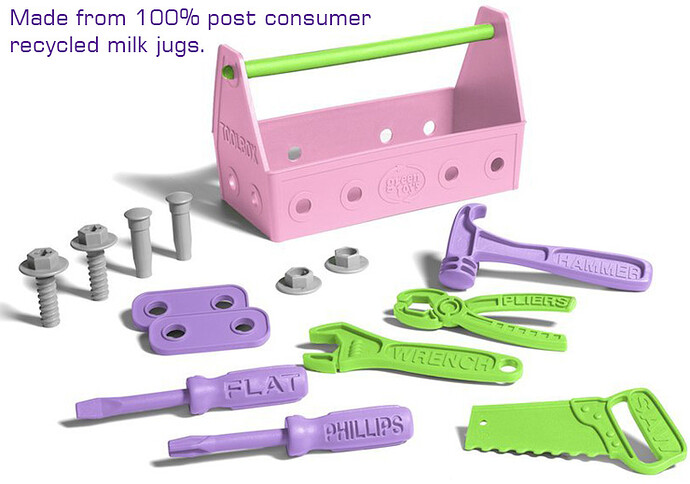 Hadn’t seen the tool set, pretty nice. Next on my list in both colorways.

Classic Example - Enzo Mari Animal puzzles. I can remember playing with these at a very young age, and still have them somewhere.

Lots of play value here, as it is both a puzzle and a set of characters for imaginative play. Comes in a wooden box for easy storage, which I’ve been told is an important feature which a lot of parents look for.

This one is pretty advanced. I would definitely buy it for a child. Great idea thanks:) 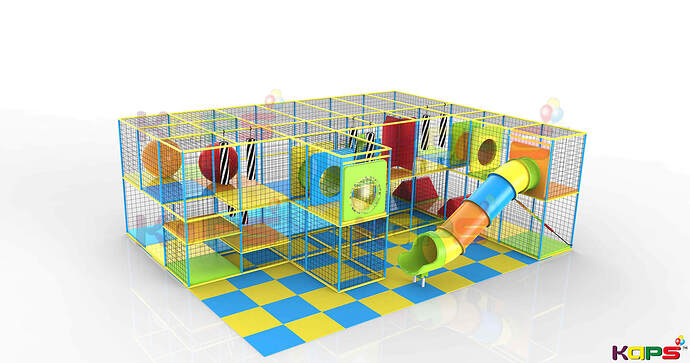 How about a indoor play structure like this?
I found this very attractive and it need about 400-500 sqft space to get installed.