An opinion piece called “Death by Bicycle” by Dorothy Rabinowitz: 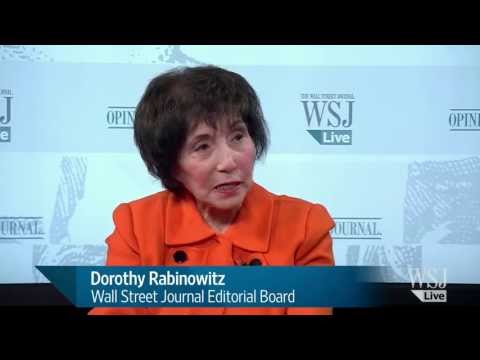 Remember everyone “The bike lobby is an all-powerful enterprise” (at 4.00 minutes) 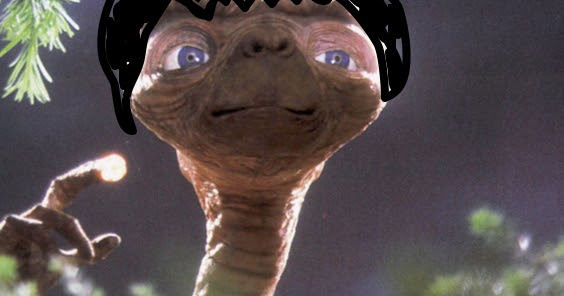 Up until now, the media has been using the conventional weapons of stupidity in their War Against Bikes, but on May 31st the entire world sa...

I’m amazed that the Jornal could be so ignorant.

I agree with her.

The NYC bikes come from the system that was funded by the city of Montreal. It’s unclear how much city money was spent on the design. It’s also unclear how much the city is responsible for the private company’s liabilities or how if the scheme makes money annually. That’s the heart of why I’m against it. I want the government to own critical infrastructure and utilities, but bicycling is now one of those utilities.

As for her comments, they are spot on, although her argument is delivered in a kind of snobby WSJ way that is likely to turn off people. They bike racks do take up a lot of real estate. They are ugly. The riders rarely use helmets. They also seem more likely to use busy sidewalks than bike in the road.

The supposed environmental benefits are undoubtedly non-existant. Bike sharing only works in dense cities that are likely to have superb public transit. Therefore, it’s likely that the rider was going to be in the bus that is passing along the same street anyway.

Lastly, I feel that the city has done very little in terms of providing safe and adequate amounts of bike racks for those of us with our own private bikes. In Spain, I saw garages in Madrid and Barcelona for bikes and scooters. Why can’t we have a garage in downtown Montreal? I’m sure there is some under used city building that could be converted for almost nothing.

Here in Chicago they are raising fines for cyclists. Before it was a joke, a maximum of $25 for any violation. Now it will be $200-$1000. Nothing is more of a deterrent than hitting you in the pocket book.

And for the record, an interesting piece from the WSJ about cycling in Bangkok,

Think Bikers Have It Tough in New York and London? Try Bangkok

Cycling through one of Asia's most chaotic cities isn't exactly a walk in the park. But ridership in Bangkok is growing.

WSJ is an OK publication except the editorial board is bat-sh!t crazy.

Wait, was she trying to force a connection between legal drugs and bike sharing?

The system works pretty well here in DC but that may be because it’s not as crowded as New York. There are a lot of routes where the metro is not accessible and the bike is faster and more enjoyable than waiting for a bus. I’ve only used it twice though considering a day pass is $7. As for the bike itself, I suppose it’s built to last but it is extremely heavy and is geared too high.

I took 2 rides yesterday. From the ferry to the gym, and then from the gym to home. Overall I think the program is great. The cost is probably going to keep it as a tourist thing (Pay per week) or an annual rider type of thing. It was a little over 10$ for 24 hours worth of rides up to 30min each. It’s a little more than most cab fares would be for those in-between distances or awkward diagonal trips, so I don’t think I’ll be using it as spontaneously as I originally thought. Or I might just get an annual pass.

The kiosk itself was pretty easy to use. The resistive touchscreen was a little poopy though. The key pad on the locking rig only has 1-2-3 so that was a little confusing to locate at first and use at first. The bikes are really heavy but feel solid and track well through and over potholes. I couldn’t help but be reminded of getting a pair of rental skis and thrashing them up for a day. Something about the geometry or super heavy duty handlebar+ basket system made the steering feel a little twitchy. The bright blue bike branding is a little over the top but the stations themselves are grey and can be difficult to spot if they’re down the street a little and there aren’t any bikes in them. The kiosks have also have a cool tubular solar panel.

I ride a fuji track as my daily get around, so it was kind of neat to contrast the entire ownership/ user experience of both.

They don’t really work here in Ottawa. Main reason being that all of the stations are downtown, and downtown is small enough that everything’s walking distance anyway, so the usefulness for transportation is eliminated right there. Only the tourists use them now, and with the additional charges tacked on after 30 min, it’s much more expensive than the daily rentals that are offered by other companies.

I can see it working well in NY though, given that Manhattan’s dense and large enough to have them properly spaced (safety and public infrastructure issues aside).

Works beautifully in Minneapolis St Paul. We have the same bikes/system here. It’s very popular and many locals use it daily. Tourists, too, of course, but our public transit system is not as robust as other major cities.

I just wanted to provide some counterpoint, specificaly @Mr-914:

As an overall personal note, the bikes have been a godsend for me. I can zip down 15 or so blocks much faster than walking but much more convenient than entering the fray of the subway system (there are some unexpected awkward zones for mass transit on Manhattan). It’s also cut my commute by about 20 minutes.

EDIT: Quick note, just wanted to mention that the editorial opinions expressed in this video are batshit crazy. That is all.

iab: I think bikes, pedestrians and autos should all only be covered by one offense: unsafe use (notice this covers parking as well as driving offenses). The police here seem to hand out a lot of biking with headphones tickets, not too many moving violations.

The system is popular here too. I think locals use it more than tourists.

Hatts: NYC system is private. It has competent management though, unlike Montreal.

Buses are ugly too. Noisy to boot. Definitely not ideal.

Perhaps New Yorkers will ride more responsibly than Montrealers. My experience is based on watching this system in Montreal since 2011. BTW, the road in front of my apartment had a bike lane added 3 years ago. I admit, I have confirmation bias, but 1/2 bikes ride on the sidewalk right next to the lane that is in the road.

I am for a robust funding of bike racks. They are far cheaper and durable than a bike sharing scheme. However, I wouldn’t mind a small fee for use for parking a bike similar to parking a car.

I’m glad that you are getting good use from it. I’m curious: what stopped you from riding your personal bike for your commute?

I’m curious: what stopped you from riding your personal bike for your commute?

Good question. My commute is from Queens to far west Manhattan, and this involves crossing a pretty massive bridge and then slicing across the busiest part of the city. Traffic, safety, and just general distance make it less than ideal.

New commute is: subway over the water and past the aforementioned busy parts, then transfer to Citibike for the last leg of less-dense blocks.

Not to mention you don’t have to worry about parking your bike anywhere.

iab: I think bikes, pedestrians and autos should all only be covered by one offense: unsafe use (notice this covers parking as well as driving offenses).

I’d agree to that, but the law would need to define unsafe.

We got a few new ones on the books. Cars must give cyclists at least 3 feet when passing. Also, cyclists (and motorcycles) are allow to run red lights (not enough metal to trip the magnet sensors for the traffic lights).

I would like to see Idaho’s law that allows cyclists to use stop signs as yield signs. The most dangerous place for a cyclist is an intersection. Getting in and out as quick as possible only increases my personal safety. I had an old man yell at me once for rolling a stop sign on my bike. I turned around and asked him how many cars does he yell at when they roll a stop sign. He shifted his eyes down and walked away.

Any valid points that the WSJ (and the idiot reporter in the video) have (i.e. cyclists need to follow the road rules) are invisible in the face of that patrician snobbery.

Interesting that is a private company, not using taxpayer funding, providing a public transport service, and selling advertising- 4 ticks in all the necessary right-wing/ tory/ neo-con boxes, yet it is still opposed as some sort of lefty/big-government/‘bureaucracy out of control’ conspiracy.

Out of interest, does anyone know who makes them and what running gear they are running? It looks like a Nexus internal hub with a bash guard on it from the photos, but I can’t tell.

Here the city council has a free bike scheme, but it’s mainly for tourists (wide low mostly flat city, low population density, little traffic congestion). Kona “Africabikes” with Nexus 3 speed hubs. I think you have to hand over ID like a drivers licence or passport, plus a refundable deposit: 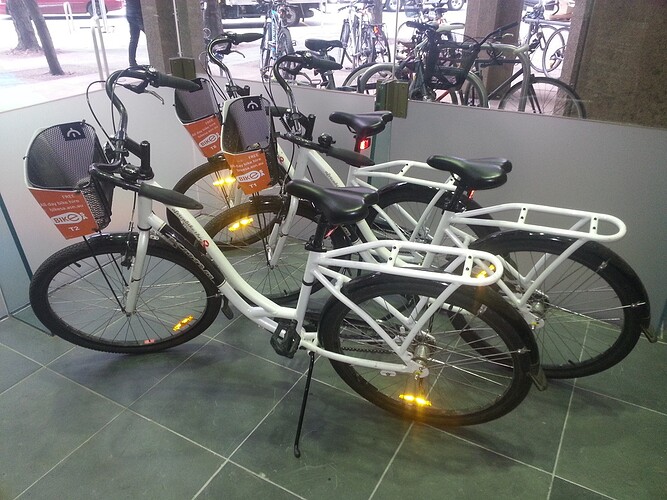 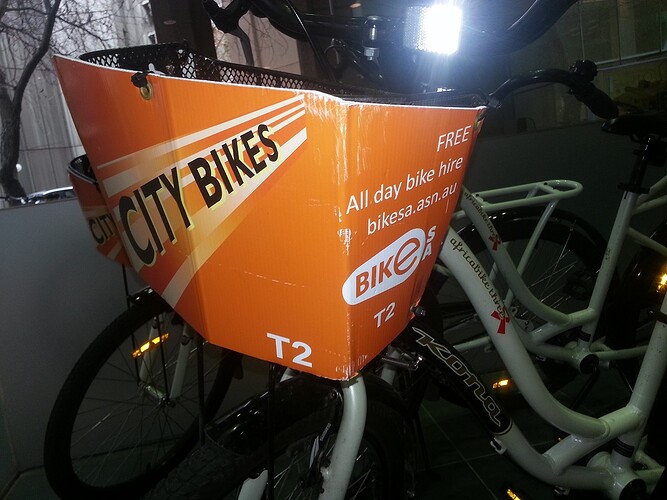 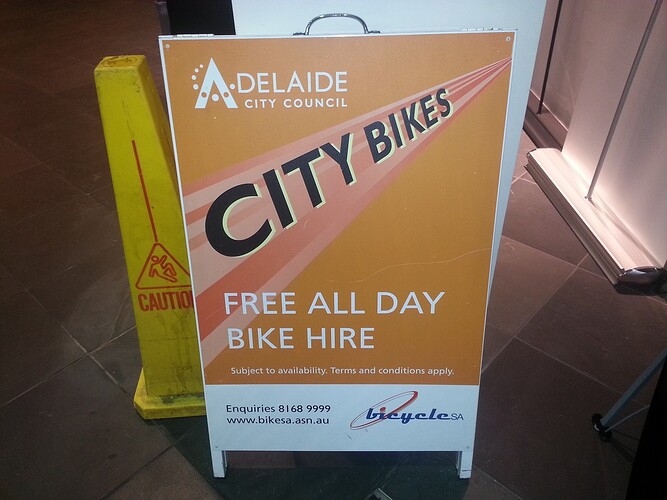 Not to mention you don’t have to worry about parking your bike anywhere.

this is also huge. I try to avoid locking as much as possible.

The bikes are made by Devinci in Canada:

The design of the furniture is by Michel Dallaire, the bike was modified by his studio.

Interesting that is a private company, not using taxpayer funding, providing a public transport service, and selling advertising- 4 ticks in all the necessary right-wing/ tory/ neo-con boxes, yet it is still opposed as some sort of lefty/big-government/‘bureaucracy out of control’ conspiracy.

That’s how you know it’s either an insincere or an inconsistent sentiment coming from WSJ.

Whether you’re for or against it.