Few devices make you reassess your career choices, but the Wacom Cintiq is one of them.

Sweet, unfortunately my 21 is still in great working order…

Saw this today as well, I had a 20wsx that is great, but am interested in seeing this, and if it is all I would hope, I’ll swap the 20 over to another person here and upgrade. Well as long as it isn’t outrageously priced.

Anyone with a spare $2500 in need of some eternal gratitude?

Does it mean that they will lower the price of the non-HD cintiqs?

Does it no longer rotate? I love the sitting half on table half on lap thing… will save my back (if I ever can get it at work).

Gizmodo review up with video. Looks fantastic. I’m most psyched about the screen. 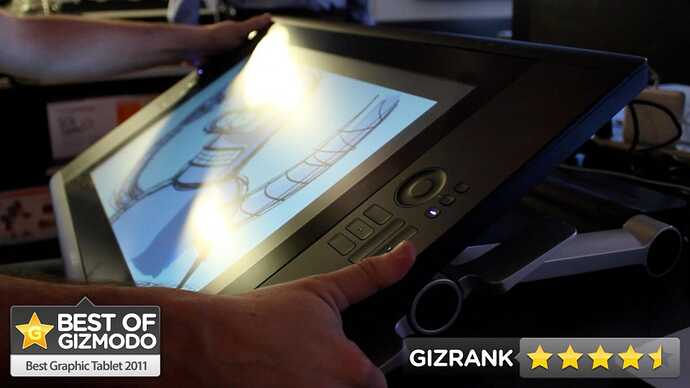 I played with the gigantic Wacom Cintiq 24HD last week. It is so well designed and it works so incredibly well that I found myself giggling like a little girl. I drew and drew and I became addicted.

We are having an argument at my studio about the rotation thing. So far we are divided. I don’t mind it since SBP, PS and Painter all allow you to rotate the screen in the software, but for others the lack of rotation is a deal killer. The clincher for me is the height adjustment and the ability to hang off the edge of the desk. I’ve switched back to the Intuos because the Cintiq’s ergos were total shit. Add a 24" screen and I’m sold.

The lack of rotation is a deal breaker for me too. It my sketching style to be able to rotate the paper. I will admit thought that the half on the desk and half off is cool.

I’m using sketchbook pro. I have used the canvas rotation a bit but prefer the old fashion way.

I’m using sketchbook pro. I have used the canvas rotation a bit but prefer the old fashion way.

Word up, +1 on it NEEDing to be able to rotate… Pretty hot however. Per the Blog post, Zeba in Portland did the design work on the 12ux, and the rest of the family is looking pretty similar now… so I’d guess that Zeba did this too.

Not all computer support canvas rotation in Photoshop, which I prefer to sketch in (instead of SBPro, where the rotation is kind of annoying). I like to physically rotate my tablet. With my old Cintiq12WX, it was easy since it was so small, but my 21UX at work is insanely hard to rotate.

For those worried about rotating the screen. It still has mounting brackets on the back of the display. Just take it off the stand and throw it on an adjustable arm. Like an Ergotron LX makes it super easy to rotate and adjust the screen. In my opinion the best upgrade you can do to your Cintiq workstation.

Going to need a new desk.

3x the weight of a heavy newborn…

Going to need a new desk.

I imagine that stand is a giant counter-weight to be able to operate the way it does. You won’t be moving the stand often. Being able to draw while standing and bringing the screen off the desk towards you are two very nice benefits of said stand.