Does anyone know the story behind Skoda and Seat basically ripping the design of the VW Up? I recently saw a VW Up that looked a little ‘off’, and on closer inspection it appeared to be the Skoda Citigo. I am interested in what people think about this.

To me as a designer it seems like an embarrassment to a brand to pursue such a strategy just for business reasons. And you’re treating people a little bit like foolish consumers. Especially the Seat Mii is disappointing. So they suffused the front a little bit with the Seat design language, but it completely breaks with the entire car behind the headlights which is more minimalistic. There is not even a little bit of creativity there, I can in 1 minute come up with at least a few ideas to adapt the design a bit so it still looks like a competitor for the Up but more uniquely fit to the individual brand. I guess it is just hard for me to understand this kind of thing, and I am wondering what people think.
Thanks! 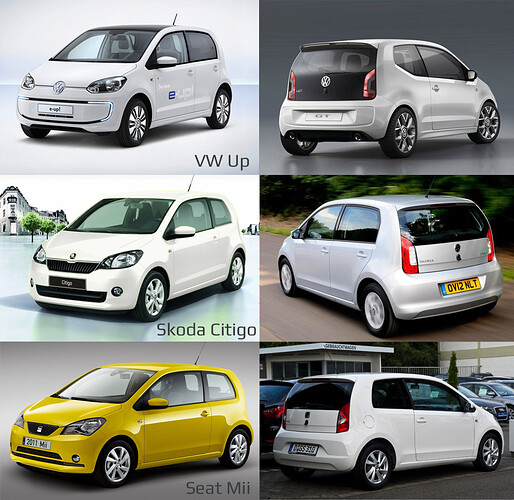 Skoda and Seat are both owned by VW.

Most of their cars share the same platforms and many parts as their VW counterparts.

At the low end of the market, it doesn’t make sense for them to spend much money re-tooling their lowest end cars. Badge engineering has been going on for ages and will continue to exist in the auto market. The logic is, if there are 15 cars in a class, it’s better to have 3 of them be your brands rather than 1.

Still, perhaps there could be more differentiation. You don’t want to hurt the more expensive brand by causing confusion in the marketplace.

I’m sure there could, but for a car that starts at only $8000 Euro, the cost of differentiating would likely make the cheaper, lower volume cars even more expensive, which then means no one would buy them.

From a design perspective it makes sense, but not so much from a business perspective.

Just like the Lebaron, Acclaim, and what ever the Doge version of that POS was…

VW has always had trouble dealing with the Skoda and Seat brands. One minute, they try to create a new design language, the next one, they are rebadging like this. Basically, this is another case of a corporation that is very reluctant to stick to a strategic design plan.