Looks like there will be a panel van option as well. It is call the ID Buzz… why not Bus? 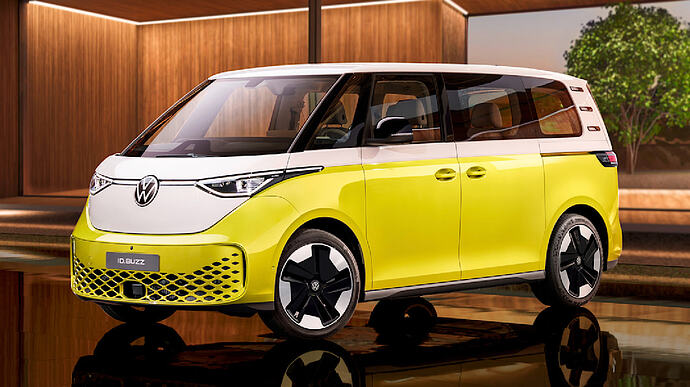 Volkswagen ID. Buzz electric van details and photos. The U.S. will get a long-wheelbase, three-row variant. 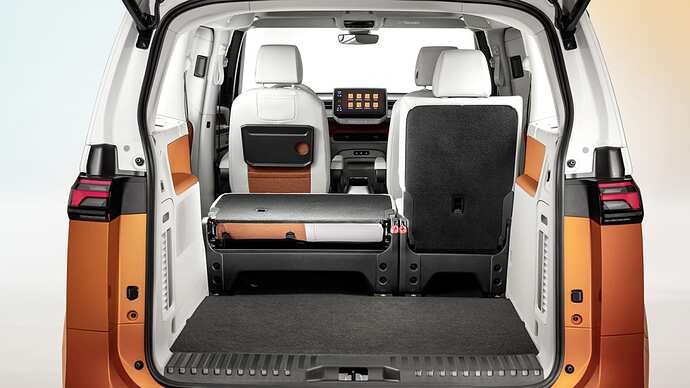 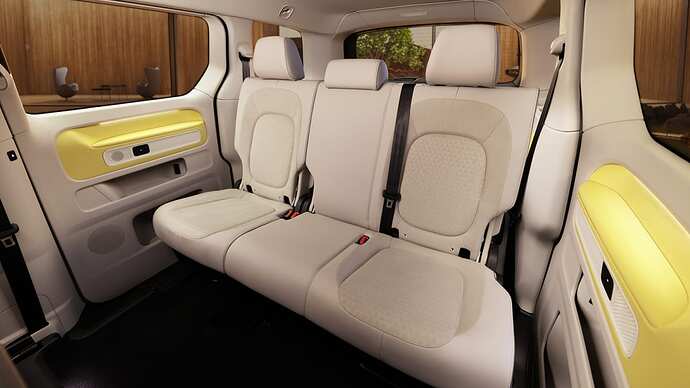 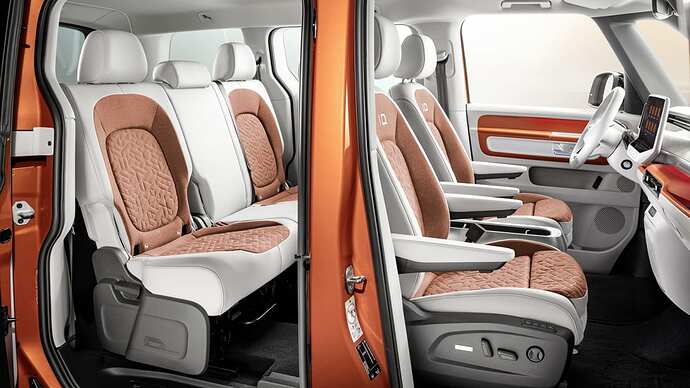 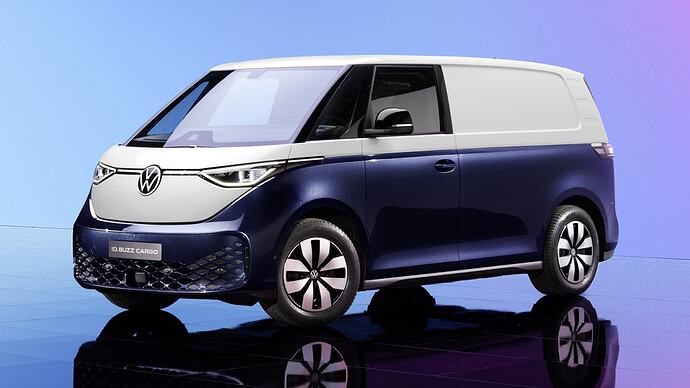 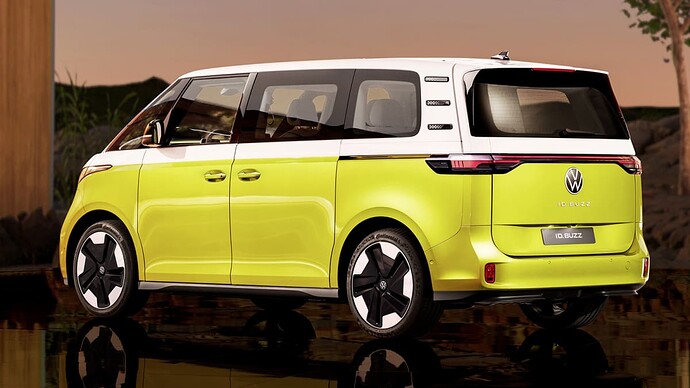 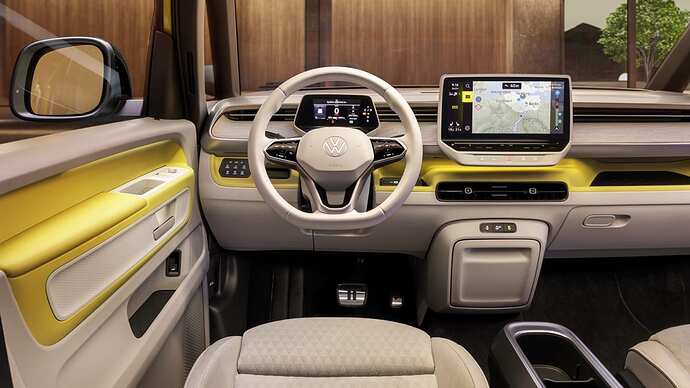 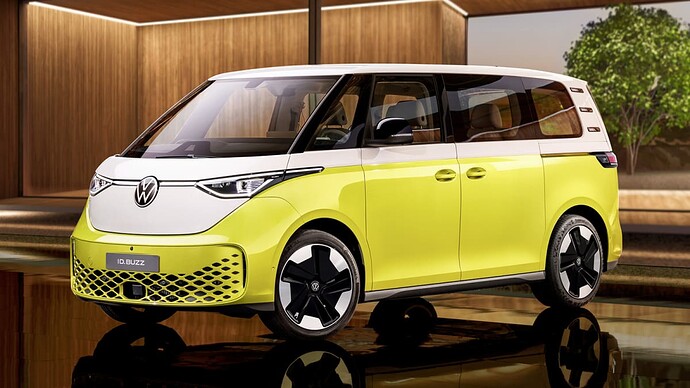 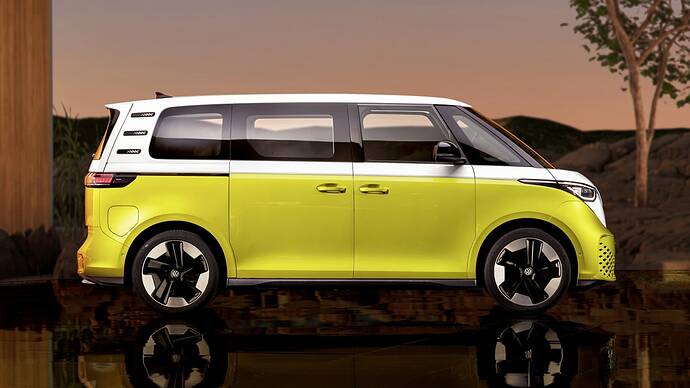 Buzz: because some $150k/year marketing person had to justify their job.

Now that I see the panel van version, I like this a little bit. As a vintage VW guy though…ugh…it’s a little off. BTW: I love the Vanagon and the Eurovan. Maybe I just need to see this a little more and I’ll fall in love…

I can’t decide how I feel about this thing. If it was just a minivan from some other brand, I think I’d have mildly positive things to say…

…But as a spiritual successor to the Microbus? Something about the vaguely-tech, faux-luxury finish to so many details just feels like a total miss.

Jeff, instead of living in SoCal, pretend you live in Ohio and the only VW busses you have seen are in movies and it’s this or a Toyota Sienna.

I’m with you though. I’m not exactly sure who this goes for. It has some nice moments. I like the rear 3/4 with those wheels.

Sit it next to its minivan competitors though and it is nice.

Somehow, the 1998 concept looks more current than this mess.

… I can’t find an angle or 3SF of body that isn’t a jumble of different forms, shapes or materials.

I would also guess that in real life, most will be one solid colour making it even more terrible.

I’m biased though: I’ve owned lots of vintage and newer vws. –
I think the VW California (not released in us!) was closer to what the US market wants from VW here.

I really dislike the mix of forced-retro two-tone paint, and more polygonal\pointy headlight\grill layout – i think it’s a harsh clash.

I wish they would’ve thrown the dart on the late-model vanagon as the retro-inspiration and done a sort-of FJ-cruiser type style-up/modernization with it.

I think everyone expects somethign different from VW here though, and maybe this was the mini-van swing…

Playing devil’s advocate here in an attempt to cut VW some slack - Ignoring the smaller details for a minute, a defining feature (if not the defining feature) of the original Microbus was the cab’s position forward of the front axle and the nonexistent front end. You obviously can’t do that nowadays because it turns fender benders into life and death situations. Knowing this restriction, is there any legal form factor for a modern VW Bus that could ever be entirely satisfying?

Playing devil’s advocate here in an attempt to cut VW some slack - Ignoring the smaller details for a minute, a defining feature (if not the defining feature) of the original Microbus was the cab’s position forward of the front axle and the nonexistent front end. You obviously can’t do that nowadays because it turns fender benders into life and death situations. Knowing this restriction, is there any legal form factor for a modern VW Bus that could ever be entirely satisfying?

good question – not fammiliar with regs at all.
like a modern cab-over form factor? - probabaly pushes the envelope way beyond the “mini van” scope really quickly when you head down that route.

I would do it differently, but every designer can say that about pretty much every object they see. It seems like some odd choices were made, but without knowing what happened behind the scenes it always seems that way.

I agree with JGray that the modern details contrast with some of the retro lines a bit too much for me, but for most people all that stuff kind of goes away in the macro bus-ness of it all… and that said, it definitely says VW Bus to an average person, its an EV minivan, so overall net win. Now we will see if it sells.

Didnt VW just update the multivan/transporter to T7? Where does this thing come in?

some flashbacks from the last 20 years of concepts: 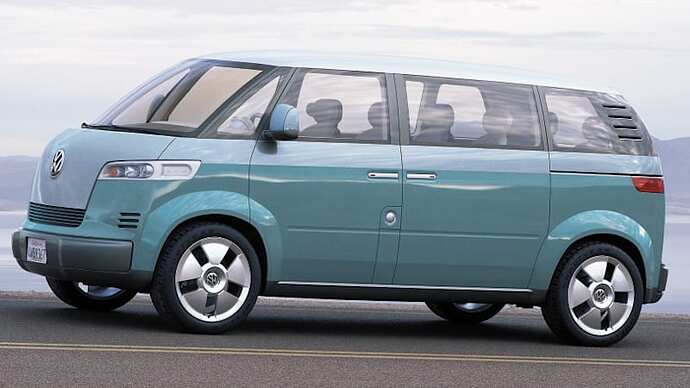 Volkswagen has been working on making a modern-day Bus for over 20 years. It previously released the Microbus, Bulli, and BUDD-e concepts.

Quick one for fun… 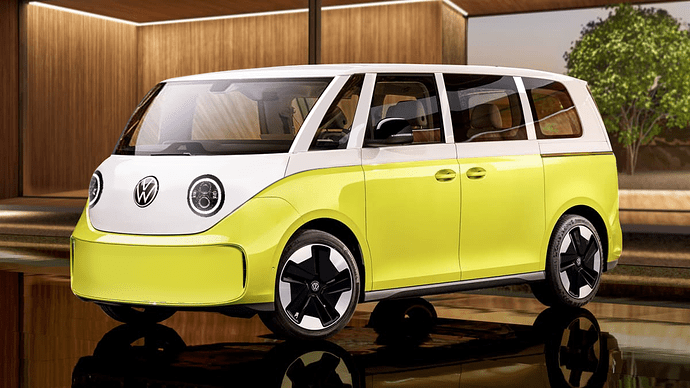 The current VW “brand language” items like steering wheel and light clusters openly clash with the “bus-ness” of the concepts, that did not have 20 years to ripe, but to degrade.
*
Let’s just burry the past and build a future!

…the U.S. is only getting the long-wheelbase three-row variant. There hasn’t been a specific reason given for why the short passenger van isn’t coming here, though we expect VW has data showing the three-row makes more sense. As for why we’re not getting the panel van, there’s a really simple explanation that comes down to two words: Chicken Tax. 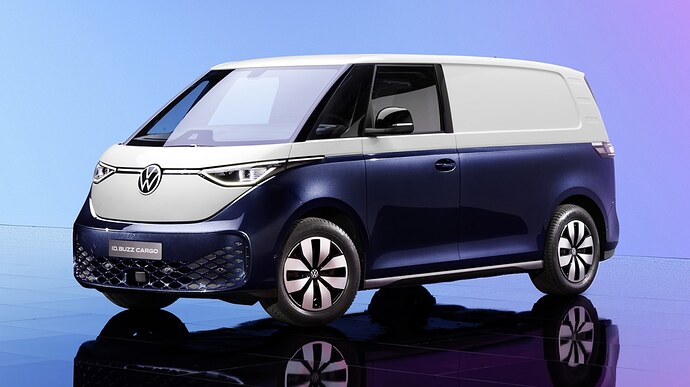 Here's why we're not getting the VW ID. Buzz Cargo

Volkswagen ID. Buzz Cargo won't be coming to the U.S. for a reason that's blocked a variety of vehicles for decades. 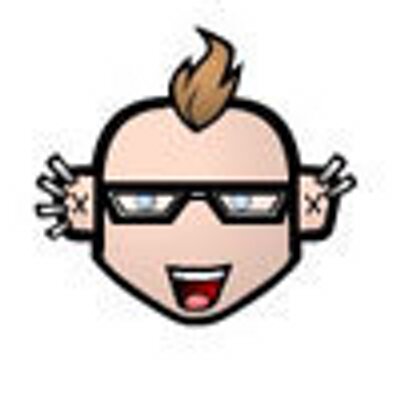 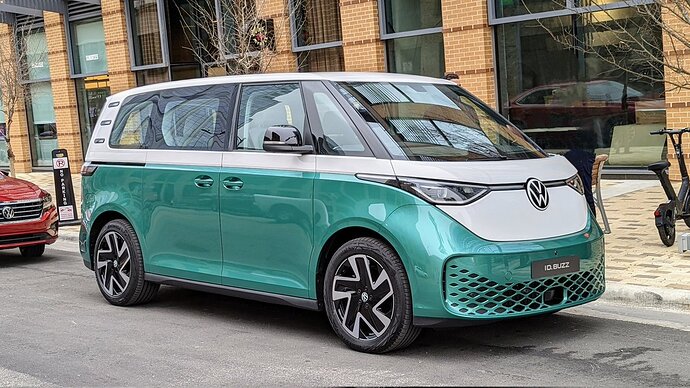 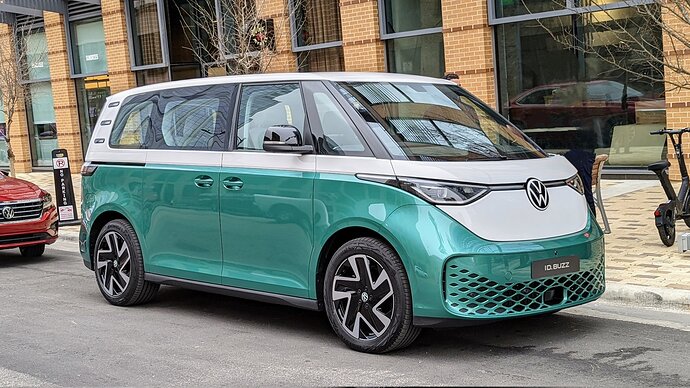 I think round lights would be just too retro, but I think this concept version from 2017 worked well with the lights disconnected in the front. And the grille details in the lower bumper are much smaller which is nice. 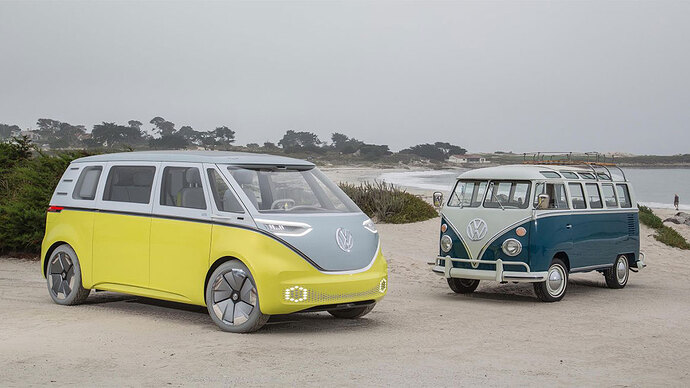 It’s growing on me actually! At first I was meh, but seeing more real photos of it hits me different… of course I’m not the customer. I’d never want something in this category of vehicle, but I’d prefer seeing this on the road to all of those Suburbans and what not. Not sure how many it will replace but good luck to them! 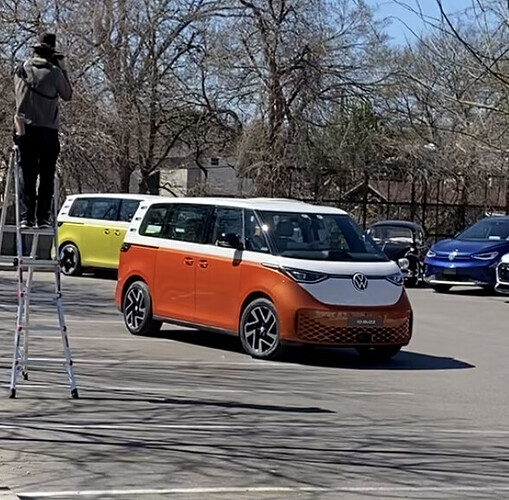 Clicking back and forth with the '01 concept, I think I know what bugs me now. The '01 concept looks German, the Buzz looks like Japanese K car.

I think another thing that bugs me is that the Honda E is so much better overall as a design. 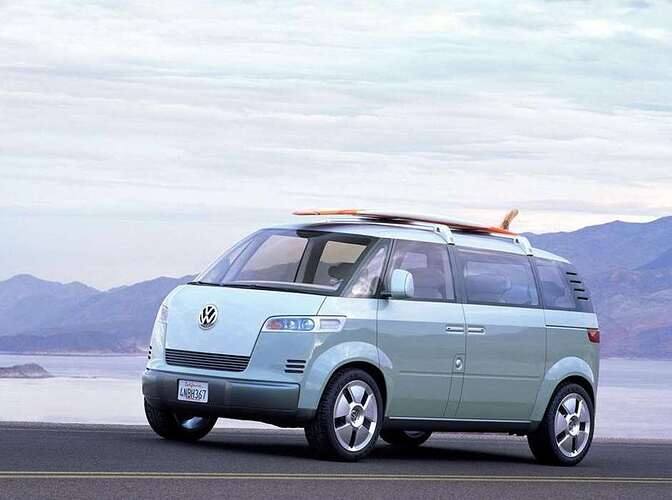 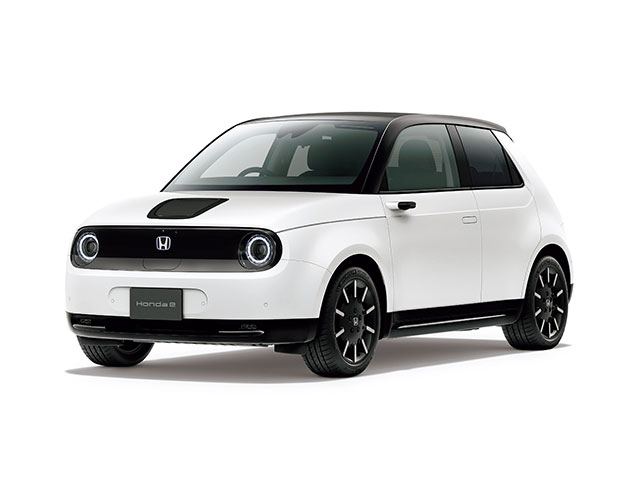 Love that Honda E. Such a shame they’re likely never bringing it stateside.