Personally - love it. Everything except the tail lights and concave grille. 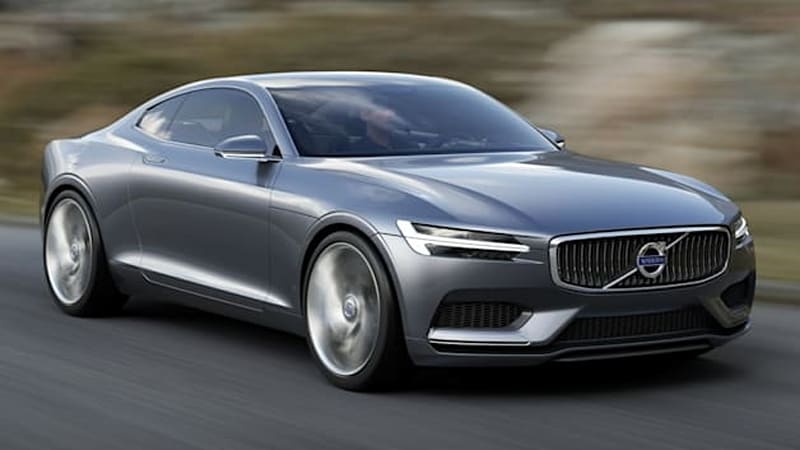 Volvo is calling the Concept Coupe its "next-generation P1800."

Seatbelt marked “since 1959” is a fun touch, but not sure it fits on a coupe - perhaps more on the coming SUV concept.
Tons of sketches on autoblog gallery.

If the drivetrain & dynamics are worthy, it’ll be a great competitor to the Audi A5 and BMW 4 series - but looking at the side by side sketch against the classic P1600 (in the gallery), it would be a stretch to claim any comparison or homage.

Love Volvo. Good example of how you don’t need 40 surfaces per side in order to be maximal or forward-looking. I’d take this over a contemporary Audi/BMW any day.

Love it, but would wait to see what the production version translates into.

I was really keen to see Ingenlaths first go at a real Volvo as his Skoda Octavia II Combi was the
best viking Volvo, that was built during the last decade… 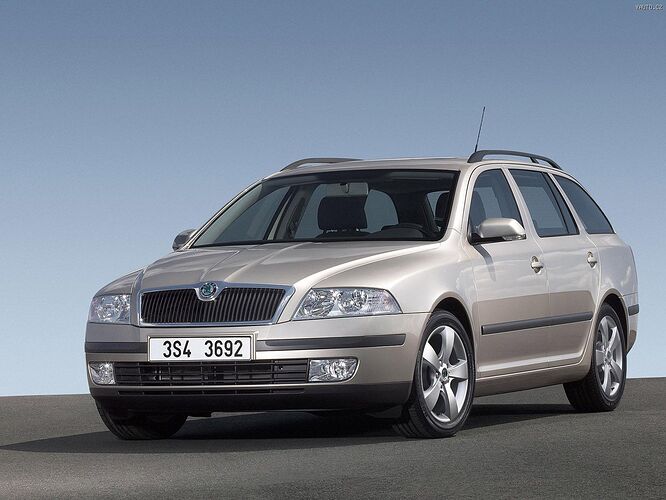 Concerning that coupe concept I am a little underwhelmed. I love the restraint, but it is not Scandinavian enough.
Very conservative in architecture and bridging between typical nordic elements and chrome “the chinese want” doesn
not work.

This concept only shows once again, how influential Bruno Saccos works for Mercedes still are.: 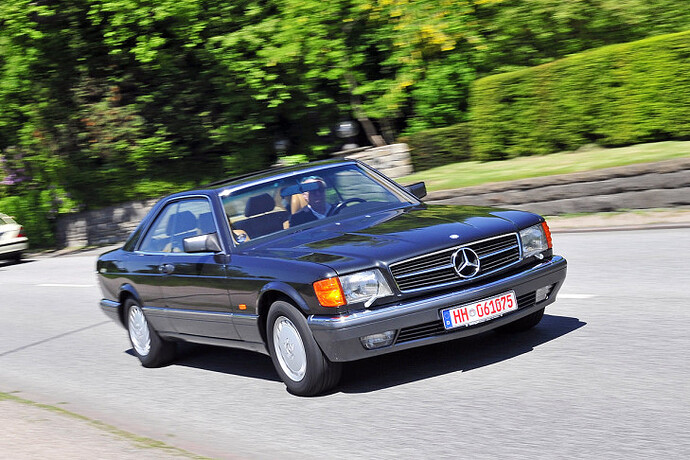 Volvo Design was well on track before Gheely:

(Okey, the model making has improved big time since this. )

I do agree I wish it had a bit more personality and quirkiness.
Those headrests are so cool in that last pic. What car is that Mo-i?

Pretty car, but it looks like the only things they took from the P1800 are the grill and instrument cluster. 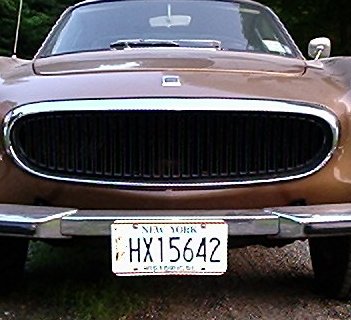 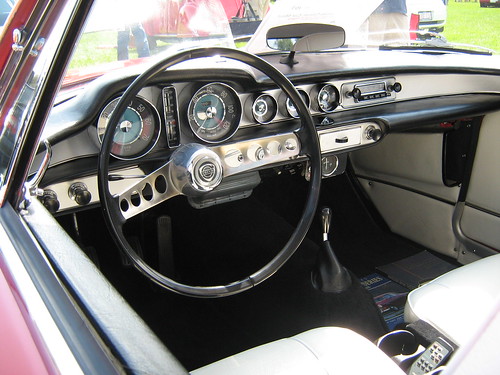 I’m liking it. It feels a bit like the concept that Bertone did for Jaguar last year in a really good way.

Yet somehow it all comes together pretty nicely. I like it. It’s probably much lustier in person. Amazing renderings too…

agreed. nice, but not scandinavian.

in fact, in the rear 3/4 and side views the proportions look more like an american muscle car - albeit with far more precision and refined detailing. but what do you expect from a one-off concept car?

and for a “concept”, it is not very forward-looking. should be in production immediately to impress at all. i’ll assume - like most of these close-in “concepts” - the production version of this coupe or the SUV mentioned in the article is already completed, and this is just an after-the-fact design masturb@ation and public relations piece.

finally, a production version interior based on this is going to hurt. imagine when all that gorgeous retro aluminium, stainless, and crystal detailing turns to plastic

Yeah, those tail lights are a no-go. Might have to do a Details, details for this…

nice but not an icon like the 1800 is. it’s a delicate balance to try and touch a classic…
what if they went retro the way Mustang did? or the other direction and go more cutting edge like the original BMW Z3?

Came across this beautiful analog sketch of the concept. 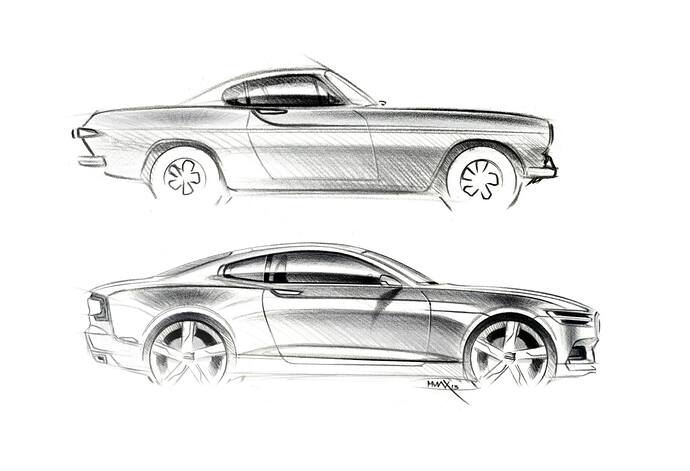 I’m a bit late to the party, alas, I just created my account.
I grew up in Volvos, becoming quite an enthusiast of the brand, my username regards my favourite colour and model (98 Volvo V70R in Saffron orange pearl).
Like the others here, I really wasn’t feeling the some design elements, so I did a quick photoshop render of some proposed changes. 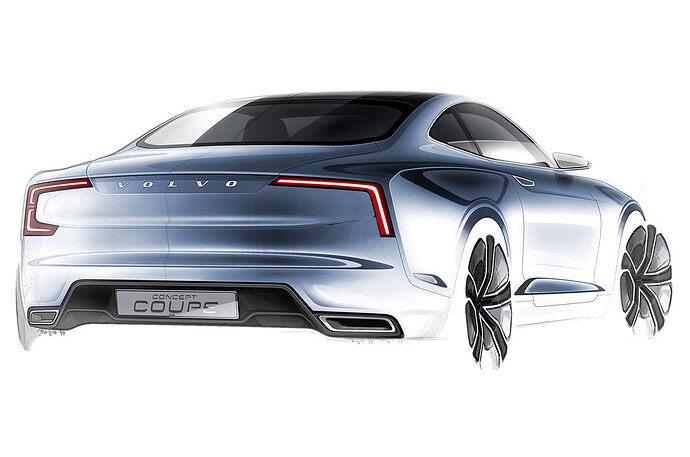 Changes: Tail lights completely, originals are not a homage to the P1800 whatsoever, nor are they related to any other Volvo design (left is purposely untouched to clearly see the changes).
No more hoffmeister kink, smoothed the rear quarter window corner to something more graceful/Scandinavian.

Again, sorry to bump an old thread, but thoughts?

nice tweak. I think it would be interesting to wrap the tail light vertically up over the top of the funk to recall the old Volvo Wagons of the late 90’s as well as hint at the P1800 fins. Defintely getting rid of the kink in the DLO is an improvement. Personally I love the proportions of this car overall. It is like a Scandinavian Mustang. 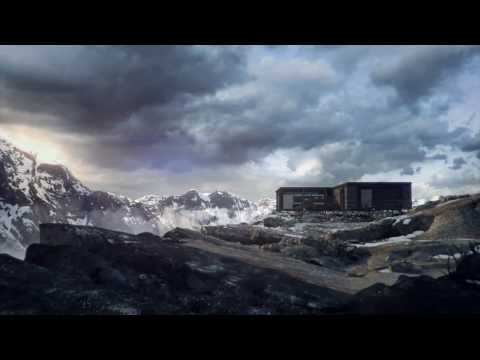 Excited to see this. Now that most of the brands that were clean and simple 10 years ago (Nissan, Honda, Audi a little bit etc) have gone full-blown maximalist messiness, I appreciate Volvo’s healthy balance and they are one of my current favorites. Clean surfaces, but with some nice quirky details, love the tail lamps evolving from the current gen SUVs and sedans and the unique but still classic front face as well.

It’s amazing to see the good management over old European brands by companies from emergent countries. They are doing a really good job, not long a go a company like Ford wasn’t able to do anything worth it with them.

New images of the XC Coupe

Volvo has revealed the first images and details on the Concept XC Coupé, the two-door, four-seat vehicle targeted to customers with an active lifestyle and inspired by modern sports equipment.

I’m liking the new Volvo design philosophy more and more. Super neat, clean and elegant with a bit a technology.

I think the grille will have to grow on me, but the rest is spectacular. Nice to see Volvo finding their groove again.

It is something with the foreign managment isn’t it? Few remember that Volvo was actually profitable until the first year of the Ford regime. The 850 had been designed and developed completely independently, but in a very intelligent manner. It was built at a reasonable cost and only concentrated on what Volvo could do better than anyone else (safety, ergonomics, immense space, tank-like suspension).