We are planning on producing a series of 5 minute videos on quick sketching, I will sketch on a variety of topics in the series. The first one is a shoe of course, but feel free to suggest topics and comment in here.

Thanks for sharing with us!

Thats so much fun to watch, thanks!

Very good idea.
Let me know if you need one done in pen (also).

YO…
super Cool & Quick…
Thanks for sharing…

Cool sketch. I agree with rk about the final scan, maybe insert the pretty scanned version above the video link, so viewers can choose which sketches they like and then watch them in process. Will more designers be adding? on this thread? or a separate thread?

CanÂ´t wait to watch the other videos!
Loved the song also

Thanks Guys. I will try to dig the original back up and scan it. The exercise is pure rapid viz, so the design is very simple. I did 2 or 3 warm up sketches to the song so I could get the timing down and then just went for it. They are each variations around a similar, blutcher toe theme.

The next one will be an mp3 player. Should be fun.

1_ dug out the original and scanned
2_ I had a general idea of what I wanted to do in my mind, and I did a couple of warm up sketches, but it is a pretty simple shoe, so it was easy to make a few simple decisions on the fly. I knew I wanted to do a cupsole with a blucher toe. You can se me making some decisions, like adding perfs, the little woven label, and those details in the cupsole at the last second.
3_ really? Slow? When you are doing it, the 4:39 seconds goes by a lot faster. This is quicker than I would typically sketch. It would normally take me about 15 minutes to sketch at this level with color and detail. I didn’t even have time for stitches! A quick pen ideation, maybe faster. 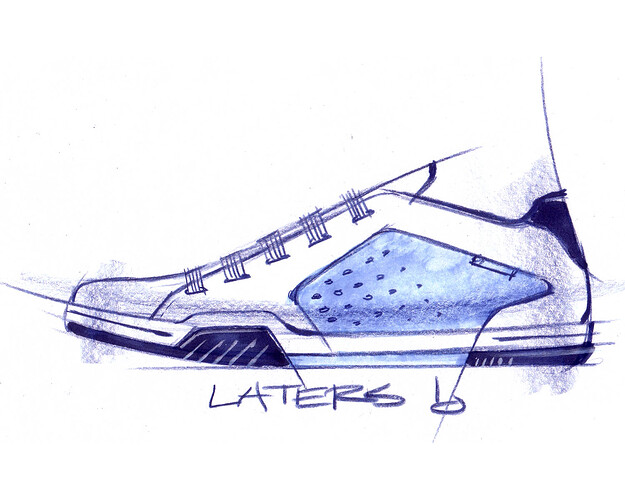 awesome video Yo, also managed to check out the video of you on Nikelab.com, insane stuff!!!

going to work on the next vid this weekend… it all hinges on the song, still trying to figure that out…

going to work on the next vid this weekend… it all hinges on the song, still trying to figure that out…

Yeah, IMO you blew your load early with this song, it’s going to be hard to top.

It got to be the right mix of quirky, catchy, up-tempo and annoying… I have a short list pulled together, but Young Folks was perfect…

Next Episode is up:

Kids, please try this at home. In this episode, Michael DiTullo and Rocko the Ruler sketch up an iSomething-or-Other in about 5 minutes. Check out how Michael gets multiple tones out of the same marker by varying pressure. Also notice how he starts...

do you think you can post a high res image of the new one, it’s hard to see all the details