This doesn’t seem useful either for amateurs or experienced cyclists. Your best assets in cycling are awareness, hearing, and sight.

Over $500K kickstarted however.

Yikes! A $1200 carbon bike seems . . . crappy. Oh wait! It still weighs 16lbs so it seems like it very well may be. But it says carbon 23 times on the page so it has to be good right? Perfect to commute to a bombed out building like this: 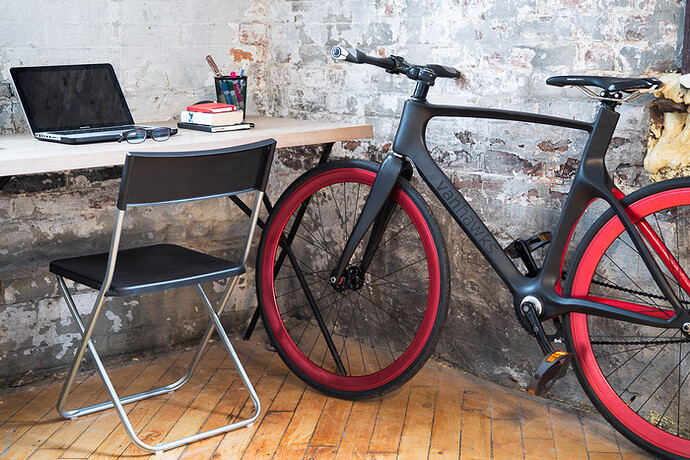 I like the stare-at-the-handlebars approach. This way you can ride in the dark without lights while wearing sunglasses and headphones without having to look at any signs, cars, or the world in general.
NURB May 22, 2014, 1:27am #3

Ugh. I hate everything.

So the whole bike is in effect the electronics in the handlebar?

I like the “vibrate to turn here” idea, great for a bike share scheme, but isn’t it superfluous for a daily ride - wouldn’t you get to know your commute route? and I like the colour on the inside of the seat and chain stays.

but no brake bosses, no cable runs, no pannier bosses? Surely not clamped onto the frame?

And why is the nice man in the video riding in the middle of the road?

Back when I was single, I biked all over Montreal just about every other day. Even though I did listen to 1 ear bud headphone, my head was on a swivel. I was constantly looking behind me, to the sides. At every intersection I would double check to see if a car behind me was signalling a right turn or someone was going to left turn from in front of me. Now, I’m shocked at how I see people riding just staring ahead, seemingly oblivious of everything. Maybe this bike is for people who don’t want to pay attention, but ride in urban environments?

Maybe this bike is for people who don’t want to pay attention, but ride in urban environments?

I feel like this bike is sort of an enabler of those people, most likely the same people who think salmoning is a good idea…

To me though, design should be about helping people find the right behavior/process, not enabling them to further diverge into an unsafe process.

Back when I was single, I biked all over Montreal just about every other day. Even though I did listen to 1 ear bud headphone, my head was on a swivel. I was constantly looking behind me, to the sides. At every intersection I would double check to see if a car behind me was signalling a right turn or someone was going to left turn from in front of me. Now, I’m shocked at how I see people riding just staring ahead, seemingly oblivious of everything. Maybe this bike is for people who don’t want to pay attention, but ride in urban environments?

In my opinion, it’s just a way of making things easier and safer. It’s like these cars which have an alarm in case you don’t realize you’re moving to the next level or the cameras or sensors for parking. I’m not a huge fan of these features, but it’s useful for some people and it’ll avoid some scary situations.

Im not fully understanding why this is carbon? I get that is looks fancy, but for a dedicated commuter that is going to take a lot of rough pavement, I think I would go with aluminum. There are no reasons to go with carbon on a bike of this level. What benefit does it provide? Not weight savings or strength. I guess you could say it dampens the roads, but there have been some really good metal frames lately that would make you question the material. Also, how are they integrating the brakes? Looking at road manufacturers dealing with disc brakes, they have to rethink the frames in order to add the disc. I wonder if they have accounted for this, or just hope the “internal wall structure” will be good enough. I would like to see some FEA data to support any claims on this as well.

Holy crap. One could have a field day with this.

Let’s start with the bike setup. A slammed seat and stem spacers to the sky??? lol. It’s like they purposely are in “hipster” mindset - everyone else has a slammed stem and a lot of seatpost showing - let’s do the opposite.

No tire clearance? Looks like 23s are the max size. For commuting??? Even pros on smooth as glass pavement are running 25s.

Surfacing? Hard to believe but they made their BB more of a turd than Cervelo did back in the day. Let me guess, lateral stiffness, vertical compliance. lol. But the seattube looks the opposite. Transitions from surface to surface are way to exaggerated.

And finally, the first rule of Italian racing, what’s behind you is not your concern. The proximity sensor is just asinine. If a car from behind is going to hit you, its going to hit you. Rear view mirrors and rear view cameras are best if you are riding side by side, see a car approaching and move to single file. Also, I ride with parked cars to my right, will that damn sensor be vibrating all of the time? Can I turn it off? Then why have it in the first place?

But they did sell a shitton. WC Fields is again proven correct.

At least the blind spot sensors in cars serve a purpose. I would like them on my VW. With rising beltlines and thicker B pillars, it’s getting harder and harder to see what’s next to you. I hope bikes will never have this problem!

If anyone would like to interpret ‘unibody carbon construction’ and why this is indeed better than every monocoque frame out there, including the sizable body of research done by carbon manufacturers like Trek and Giant…and why their sample tubes look like such a damn mess internally…I would love to know.

Agree with the above on the frame surfacing. You want ride quality for commuting, lose the huge frame sections, lose the deep dish el cheapo red rims, and fit larger tires.

Maybe they can invent some interface that uses your phone camera to display an image of the road ahead and overlay it with directions, weather, road conditions, traffic, and what friend is around the corner eating pizza, so you can look at that, instead of the road. That would be a game changer!

Design: what you can get away with.

Hate to be negative nancy first thing in the AM… but I’m having a hard time coming up with any positives on this project, other than giving me hope that I can somehow raise a half mil on KS someday.

I’m just confused about the whole premise of the “blindspot detection”.

When I’m about to make a turn, it’s not the car sitting on my back wheel that I’m worried about, it’s the car that’s another 15-20 meters back (you know, the one that’s ACTUALLY in my blindspot) but approaching fast that’s going to cause issues. So really, this thing only seems to pick up the cars that I’m going to spot relatively easily on my own.

The argument doesn’t really improve much if you assume this device is just for detecting cars that are about to pass you while you’re riding straight, because by the time this thing picks up a car that’s overtaking you, it’s basically too late to do anything about it.

Now if someone could design something to detect when a parked car in front of me is going to open its door without looking, that’d be just swell.

I kind of get the blind spot detection - sometimes I’ll miss a car when I start to turn, so it could be useful. Granted, I have yet to be run over so maybe it’s not that much of a benefit.

The turn by turn thing is neat.

The bike’s CF stylings are a bit… over the top? Why do the chain and seat stays need to wiggle like that - what’s wrong with a straight line?

Biggest thing for me is that it’s a fixie only…really? Maybe I’m not enough of a purist.