So the final project of the first quarter of ID is a family of form project, and we had to design a chess set where all the pieces read as, well, part of a family. I did a vacuformed one inspired by the RIK stool: 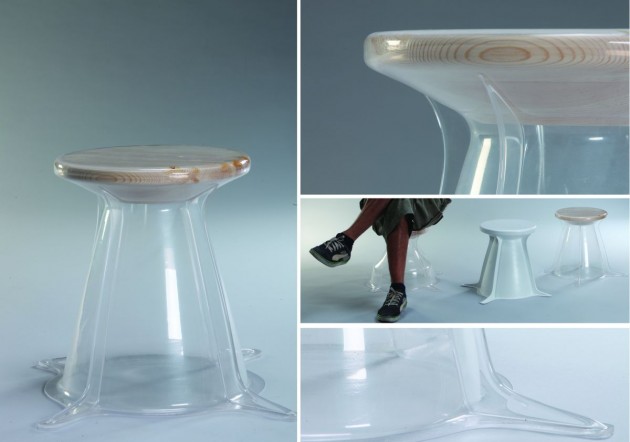 after a ton of experiementing (like 7 or so rounds) I finally got it to work properly, and thought I’d share the project with core: 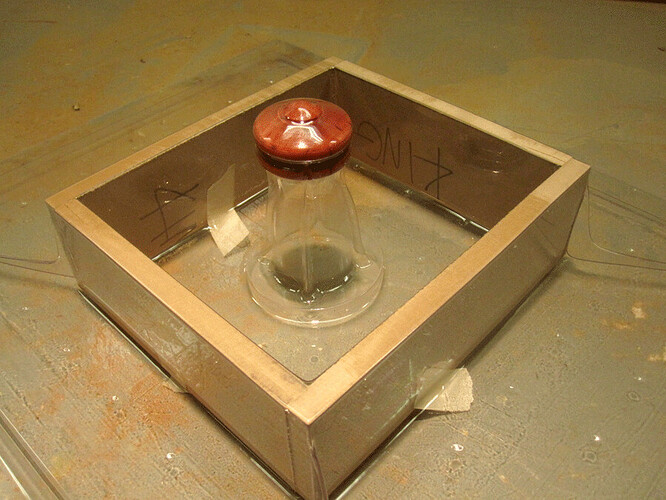 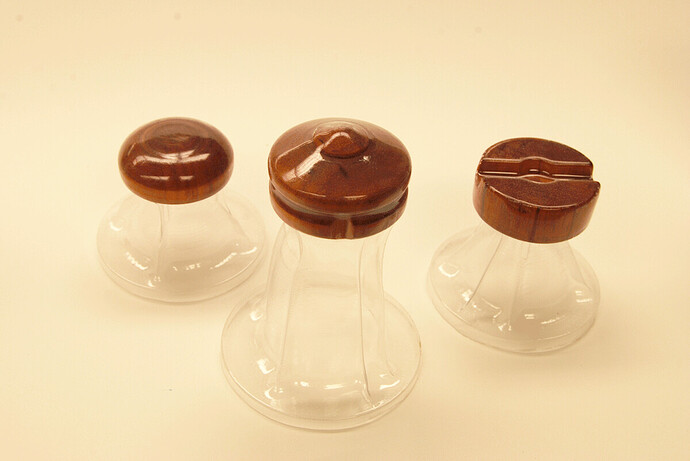 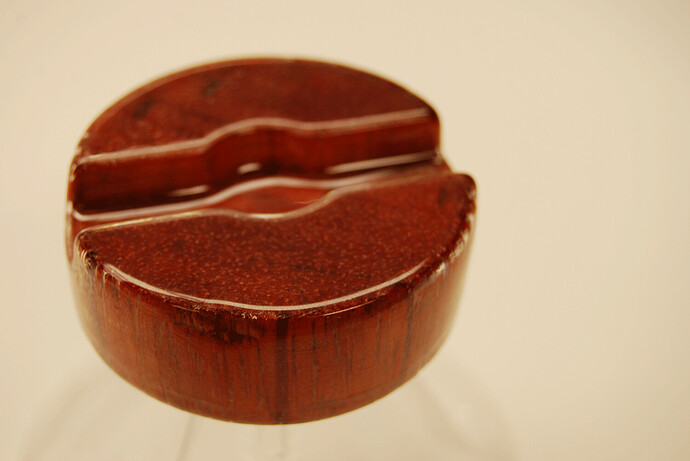 (careful, it’s a rather loud video because the air compressor was running while we filmed it)

It worked almost perfectly, except for the king, where some extra webbing occured that makes it look kind of lopsided.

The process I went through was that I modeled the pieces up in alias, and CNC’d out the bases of three pieces in REN. The bases included controlled webbing to try and prevent the plastic from bunching up where I didn’t want it to, and the top pieces were lathed out of padauk wood. After using a couple of tricks, I was able to form it directly to the mold+wood combination, and pulled the REN bases out from the bottom. I think it came out pretty neat, so I just wanted to share it here!

Cool project ineo, thanks for sharing, love to see the process of creation. Did you guys have to develop the chess board as well? Would be interesting to see what sort of chess board this would be played on, also what other material/variety of wood would you use to differentiate between the two players?

I was a little bummed that they pulled this project out last year for our year, glad to see it back in the mix!

When I was learning to vacuuform, ours was made out of an old beer keg. We had to staple the styrene onto wooden frames and press down REAL hard while kicking the lever for the vacuum. it was the best.

but sweet… although I am wondering how they look like together (you only show 3) and on the chessboard.

choto: we didn’t have to think too much about the chess board- the project was mostly designing the relationship of form between the pieces and making sure they look like a family. As a result, I took a few liberties in terms of piece size and made them a bit larger than standard chess pieces, mainly for two reasons:

The end result is that, if these pieces were to be played with, the board would also have to be a bit larger (though not much- the bases would probably only extend a little off the squares on regulation boards).

In terms of differentiating between the two players, I was thinking it would be cool to have a stained wood vs. unstained: padauk is a ridiculously orange wood, so unstained (I only used some tung oil to bring out the darker color), it would be really noticeable as to which side is which.

tarngerine: the make-it-happen by any means necessary way is always the most fun! This project was my first foray into vacuforming, and once I got the hang of it, it was pretty amazing watching a pretty thick PET sheet mold right into the form I needed- I’m pretty sure we have an “official” vacuform project later on. Anyways, as with most things that are left incomplete, I simply didn’t have enough time. I had all six of the piece’s tops (pawn, rook, knight, bishop, queen, king) lathed out, but had only CNC’d out three of the bases, so I wasn’t quite able to make the entire family of six (we needed at least three by the crit). I have an alias model I can post, but it doesn’t read anywhere near as well as the final models.

Thank you both for your feedback!

I think unstained vs. stained could be a really nice touch, if there’s enough contrast between the two. This is first time I’ve heard of padauk wood, I was wondering if you had shot your pictures under really warm lighting! But after googling it, yeah it’s really intense how saturated its color is. Looks like a cool variety to work with though, how did you source it?

I think for your portfolio you’d definitely stand out of the crowd if you pushed it a bit further and did the other pieces and mocked up the playing board (even if it’s just a rendering). Especially for your first co-op everyone and their grandma has such a similar portfolio it’s always a plus to show you pushed the project beyond the final crit.

Choto next time your at UC check out http://www.paxtonwood.com/ They sell a bunch of specialty woods. Where more UC students source there exotic woods for projects. The junior year chair gives the company a lot of traffic every year.

Just curious-
what’s the purpose of the mdf frame around the form?

Pdog- the mdf box helps force the PET plastic into the mold’s shape: 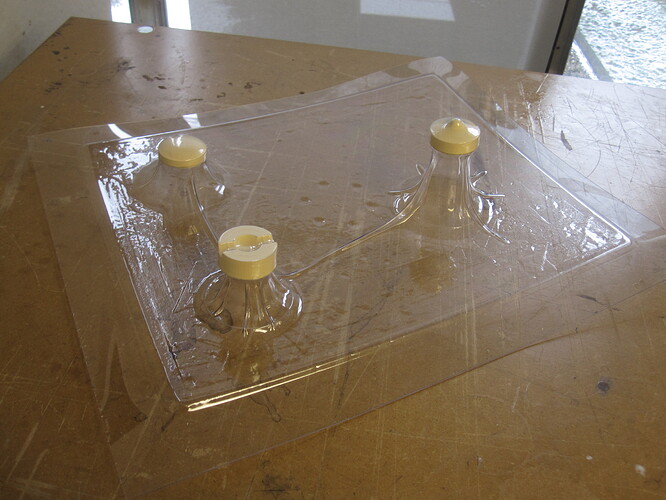 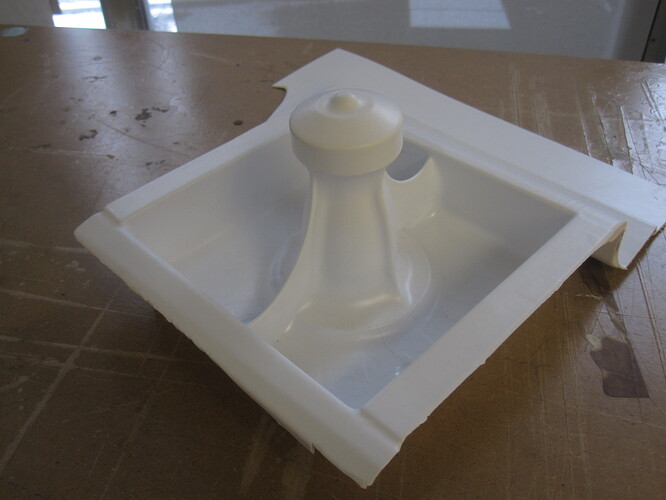 I know it’s kind of confusing, but I hope the explanation made sense!

Thanks for the heads up on Paxton! Will definitely check it out when I get back.

Awesome interpretation of the Rik stool. I too have found it to be a particularly beautiful and elegant vacuum forming concept.

As for the forms, the pawn and the rook read fairly well but the queen could have a little more stature. It being the same sort of chubbiness as the others makes it feel meh. An interesting idea that sometimes comes across in chess pieces is a reference to their type of movement. You might see 8 bumps on a queen’s crown to show how she can move.

This is quite possibly, the best project I’ve seen on the Core boards. It’s a cool concept and I’ve learned something from reading about it. It seems like you learned a lot doing it too!

Just curious enio, did you try using any kind of “plug assist” to help get the material down into the cavity and reduce webbing? There are different ways to use them, simultaneous with the forming cycle, and making a sheet of “pre-formed” material which is reheated to make the final part.

Also: Make the other parts. You have time & equipment in Uni that you won’t after grad. This could be a really killer portfolio piece if complete! Hire a couple of hot chicks to play with it and get some good photos.

Hire a couple of hot chicks to play with it and get some good photos.

Thank you all for the positive feedback! Our quarter just started up, so I haven’t had time to check core and see all of your responses!

yssagul- We developed a bunch of different possible designs in terms of how to differentiate hierarchy in a family of form (one of the main goals of this project). Movement was one of the ideas I was throwing around, however I ended up going with size/shape instead. Next to the queen, the king is definitely larger and more “threatening”- but by itself it is left ambiguous (one of the problems with an incomplete set…). I tried to put some type of cross or plus shape, but that would have messed with the height ratios I was playing with.

Mr-914- Thanks so much for saying that! It’s motivation like that which keeps me striving for the best. If I have time this week, I’ll try and get the remaining three pieces in plastic and then take some beauty shots in action (hopefully with hot girls haha).

Lmo- This was an unassisted vacuform- The machine we have on campus isn’t really conducive to having a secondary piece come from the top. Initially, I played with the idea of poking it with a stick or blowing compressed air to push the plastic over some of the harder to cover spots. Luckily I was able to avoid doing this with the bounding box I mentioned earlier- while some webbing did occur that would probably have been prevented with an assisted vacuform, it doesn’t overwhelm individual pieces like it did in earlier trials.