Does using text to describe a products function (ie. text on a button) mean with have not fulfilled our jobs as designers?

Good topic. I think it’s a great goal in many design situations. Certainly you couldn’t take the alphabet off a keyboard and still expect novice users to use it. BUT, would they understand it’s function? Sure, if they’re familiar with it.

But there are a lot of new products these days that have no precedent. What should they look like?

The “Slingbox” comes to mind. It’s an odd looking device, you’d never figure out what it’s for. The name gives us a slight hint. Could they have designed it in such a way that it’s form would communicate it’s function? Would this lesson the need for consumer education and improve sales? I wonder…

I have an anecdote to go with this.

Years ago at a well known design firm, we stumbled upon this object in a dusty old closet: 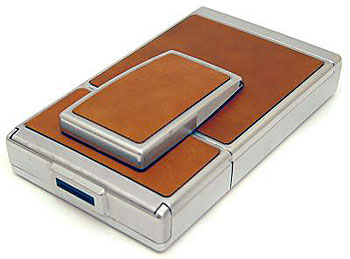 None of us knew what it was, and we carfully poked and prodded at it for quite a while before it’s secret was revealed.

For those that know, don’t give it away.
For those who don’t, click here to see.

we are doing a project right now where there is no standard icon for the function of a button…we struggled forever designging icons. we ended up using an icon, but also have to add the word above…no biggie.

there are some case where words are necessary, and some cases where they are not…words do not mean that the designers have failed…

but I thought a picture was worth 1k words?.. just kidding. sometimes it can’t be avoided. Awhile back I was on a team that was doing some guitar equipment… what would the symbols for reverb and distortion be?

It’s about doing what’s appropriate. Putting text on it doesn’t mean it wasn’t designed well or isn’t intuitive. Especially when doing a new product as opposed to a skin job. Sometimes you don’t want to be so vague. Stop signs still have stop on them even though we all recognize the shape.
Either way, if the button is used a lot the words will rub off anyway, then you’ll have it. Maybe they could do that as a kind of product that forces you to evolve and respond intuitively to it, make all the button graphics come off after a certain number of uses. Maybe on keyboards for typing schools, slowly the letters disappear forcing you to stick with the training and touch type.