Using intuos tablet in conjustion with a 3D mouse for CAD

Hey i have been working with a intuos 5 for the last 6 months or so but something i find incredibly frustrating is its ineffectiveness when I need to use CAD software. I generally then plug in a old beaten up mouse i have laying around but its far from idea.

I was wondering whether anyone has had experience using a 3D mouse such as the 3D connexion spacenavigator in conjunction with a drawing tablet in software such as solidworks or rhino?

Razer high dpi mouse on the right, keyboard in the middle, SpaceNavigator on the left. Ideal combination for Rhino.

I don’t understand the problem…

Are you trying to use a tablet and a 3D mouse in the same program?

Yes i was wondering whether it would be practical to use the tablet for clicking and such and then use the space navigator for navigating the model.

Add me to the “not sure what the issue would be” list, but I recently joined the SpaceNavigator camp and I can’t believe I didn’t get one a long time ago. The Intuos is just another mouse as far as the computer is concerned. If you’ve got the scratch and space on the desk I say give it a go.

Yes i was wondering whether it would be practical to use the tablet for clicking and such and then use the space navigator for navigating the model.

That’s a super goofy working style but it could work. Be warned that each of those devices can have driver quirks, so using both at once might compound that issue.

Personally I’d suggest just getting a $20 Logitech mouse or something. Use it on your tablet’s surface.

I have successfully transitioned from a mouse into using a Intuos 5 tablet. It took a bit of getting used to (about a 1 week or so) but it was well worth it. I was suffering from tendonitis so I knew I had to move away from the mouse. I do use a standing workstation as well so that also helps. My keyboard is above my tablet. I’m right handed so I hot key with my left hand.

Cons:
I can’t seem to control the double click sensitivity to my pen and tablet. Somehow or another, solidworks always seems to add an extra line somewhere in my sketch. I have a work around, but it is still annoying. Typing with a stylus gets a little clumsy so constantly picking up pen, putting it down, gets to be hassle.

Pros:
Much, much faster than using my mouse. No wrist strain. Switching from PS to AI, to solidworks without jumping from mouse to pen makes the pipeline a little more streamline. Sketching in solidworks is a little easier when using splines.

Conclusion:
I won’t go back to a mouse, at least not for long periods of steady work. It’s really up to the individual to decide. But give yourself an honest 1.5 weeks - 3 weeks and see if it works. Yes it is cumbersome, but you will have to setup your pen/tablet preferences differently than you would with your mouse to maximize efficiency.

masood1224 you have any tips for setting up a intuos 5 to work nicely with solidworks? At the moment i have no way to effectively navigate around my 3d model. Thats basically where my problem comes in, im used to the tablet and I dont want to revert back to a mouse. Problem is that it seems a tablet isn’t geared toward CAD software, its tricky moving around your model when you don’t have a mouse wheel and such.

This used to be the “intended” way of using Alias. The radial menus and sketching UI were all very driven by the use of a Cintiq rather than a mouse.

Personally I tried the 3D mouse and moved away from it. I am too reliant on hot keys and like to keep my hand in one place.

UNarmed, See the wacom property for solidworks below. I also hold my stylus different than I would when I sketch. My thumb is over the button rather than my fore finger. Also, I use the hotkeys on my keyboard rather than the express keys on the tablet. I press control-click to pan, and shift-click to zoom in and out. I also use the mouse gestures a lot to scroll through the ortho views. The larger buttons on the keyboard are easier for me than the express keys. PS is completely different. This setup is just for Solidworks. Try what best works for you and train your hand and eyes to work with the tablet. It’s best to just jump in the water with a project and adjust yourself on the fly. You will adapt…just be patient. 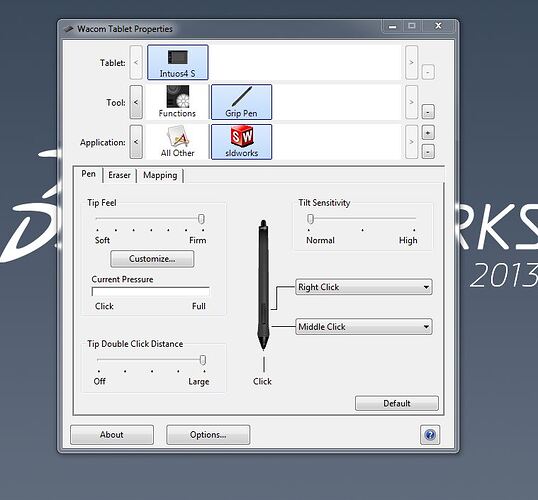 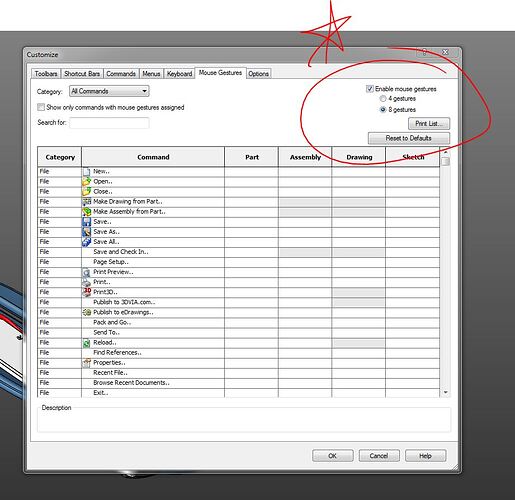 Great thanks for this im going to give it a shot!