Hello everyone! I’ve been applying for design jobs and haven’t gotten any responses as of yet. If someone is willing to look at my portfolio and give me some feedback, I would greatly appreciate it. Thanks!

What type of places are you looking at, specific field of design, consultancy, corporate, etc. Might help to frame some of my feedback with more context. I noticed you say “Industrial designer/Graphic Artist” under your name, so I was expecting to see some graphic design type work as well. Are you applying to graphic jobs as well?

I think you have some nice content and process work, I think your final presentation is a little under whelming though and you’re selling yourself short. Part of the issue is I think you’re putting too much on your pages. I think it’s fine to have some visually dense pages (as long as you have a defined visual hierarchy), but you also need some pages that have some breathing room (more white space) and allow your reader to soak in the design a bit.

I’m not a fan of having a border and title on every page, it feels a little powerpoint-ish to me and the content feels trapped on the page. The intro page for the Neo Genosys project is great because you have a nice full bleed image, some negative space, no border, but the following pages feel clunky in comparison.

The Neo Genosys project is interesting, I might ditch the last page and replace it with a shot of a person using the system. I am a little confused about the scale. You mention it being about three feet tall but the scales don’t seem to make sense with it sitting on the counter and compared to the tomatoes. Before I saw the ortho it felt like it was fridge size, maybe a nice context shot with a human for scale would help. 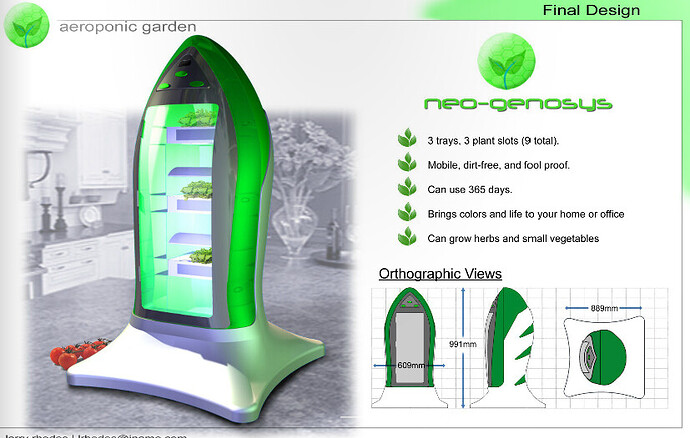 neo.jpg827×526 109 KB
The ZICO project has nice content as well, nice sketches and seems well thought out. If you have the time I might redo the final renders, they feel a little flat. What did you render them in? There’s no ambient occlusion/self shadows so it feels like a screen shot render and comes off a little flat and lifeless

The grooveshark remote project seems a little weak, the form development is a little too literal, the buttons feel a little clunky and awkward and the size is pretty big for something that’s just going to be used to change songs on Grooveshark. In comparison to a lot of what’s out right now, it feels a little dated. If you’re going to go for a more organic/emotional form I think some of your sketches captured that better, but the essence was lost in the cad translation. Overall I think it comes off feeling too much like a sophomore design project.

Sorry if I’m coming off harsh, I mean it as constructive with the hopes that you’ll be able to find a great job! I’m in the process of redoing my whole portfolio as well in preparation for graduation so pretty much all of the criticism I am giving I could apply to a lot of my work as well!

Best of luck, post up some updates if you get the chance.

Thank you Choto. That is really good constructive criticism! I would rather have that and make the necessary changes to get a job rather than be in the dark trying to figure out the problem. Thanks again!