Ever since the new nook landed, I’ve been deciding whether or not to go for it (it’s a beautiful piece of hardware)- however I don’t really like the “lock in” aspect, where, if you buy an ebook from B&N, it won’t work on anything but a nook (the same goes for Amazon and the Kindle). I know this has been going on with iTunes for ages, but as companies quickly pick up more and more on this fun new buzzword (you have to have a lock users into an ECOSYSTEM! hoorah…), it means nothing but bad news for the consumer. Once you’ve picked your device, you’re now heavily persuaded from switching because of the loss of money spent on music, apps, ebooks and so forth.

Hence, the Unify DRM program- It would have to be through some type of new regulation, allowing you to own the content you buy. If you purchase Angry Birds on iOS, you should be able to own it on Android. If you buy an ebook from B&N, it should work on every ereader out there- what the Unify program does is link digital store accounts to each other- so switching platforms is less of a heartache. Content would still have all the DRM of any individual store, but it’s now accessible to any device you want.

Now, I realize there are two rather large issues to deal with:

Anyways, I quickly mocked up some screenshots of what this service could look like. My main goal for this side project is to raise awareness for device lock-in: the longer we wait to do something, the less likely anything will happen! I’d love to hear your thoughts on this- as well as on the design itself. Thanks! 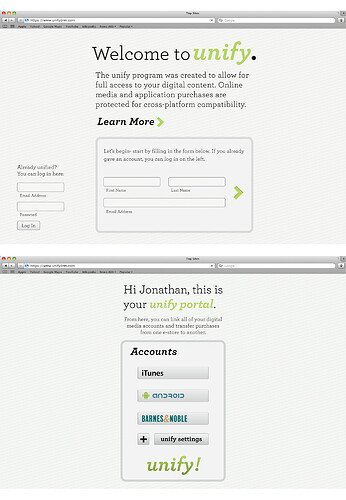 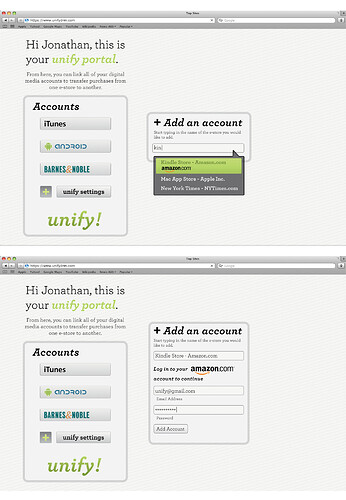 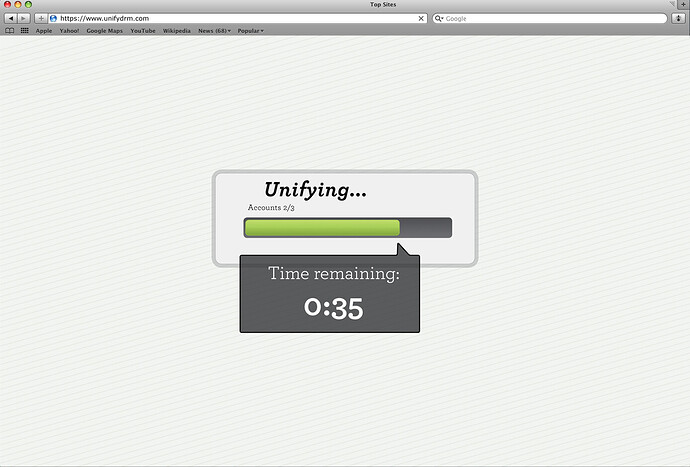 Looks like a great side project. I’ll chime in with a some more feedback when I get a bit more time to orginize my thoughts.

Definitely an issue that needs to be solved from the user’s POV.