Unexpected places your designs have shown up

Some of my B&D stuff was very mainstream so I see them often - ones I remember include an episode of Nikita, an episode of Weeds, two episodes of Eureka, an episode of Burn Notice and a construction site scene in an ‘adult erotica’ flick (had to say that one as politically correct as possible).

Here’s a different spin. I used to see our stuff all over the county. After about 1985 the motorcycle manufacturers started making their own fairings, saddlebags, and such.

Now, after almost thirty years, it’s a real and totally unexpected treat to see our stuff out on the highway where it was intended to be. 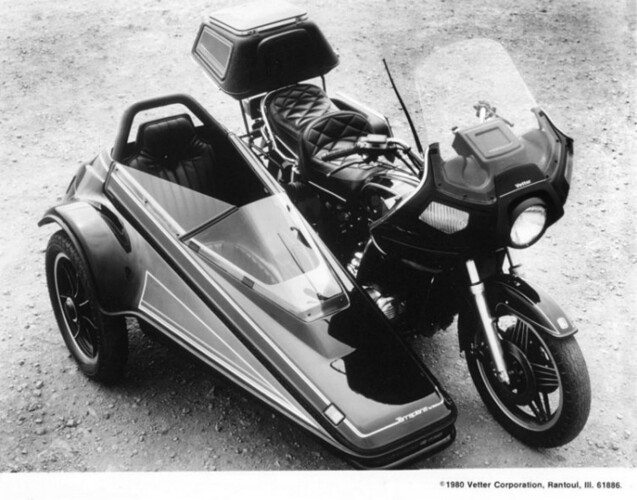 The sad truth is almost all of our stuff ends up in a land fill all too soon.

Watch: being worn randomly by my mechanic.

Shoes: all over, the best two were on the BART train in SF, saw 4 people in the same car wearing shoes I designed. Another guy waiting for the bus in Boston wearing Jordan’s I designed that had been discontinued for 4 years and they were squeaky clean, obviously the guy loved them. Also cool seeing shoes I worked on in video games… and of course on TV in NBA games… another cool one, I was moving into an apartment in Boston and our next door neighbor was wearing a pair of super rare Nikes I had designed that were only sold in Europe and Japan. They were well worn, I asked her were she got them… vacation in London 5 years before and still her favorite pair. The look on her face when I said I designed them… Also went to an art openning of a Japanese artist and his wife was wearing sneakers I had designed… shoes, too easy to spot…

Tea Kettle: On top of a garbage can, on my freaking street in SF. It was 10+ years old, so hopefully it served them well. It was just sitting ontop of the can as it expecting me to walk by. That was the saddest one.

I’ve only seen an Icon Jeep randomly on the street. Also on the street were I live. Was walking the dog in the AM and saw it cruise buy. Called up the owner of Icon and he said the guy had just moved to the neighborhood. That was cool.

Spotted a few kid’s toys I had designed at friends houses, that is kind of neat.

The best is seeing knockoffs of your stuff. Only a couple of things I have designed have made it to massive knockoff status. That is a special place!

I was feeling jealous until I realized that my designs are all over the place (albeit in French-Canada), I’ve just gotten used to it.

While not a product design, I’ve worked on two different retail projects in Times Square. So every morning watching Good Morning America I get to see my work. Or New Years Eve, parades, Law & Order reruns…

It’s a surreal thing to walk around an environment and see how people interact with it. Usually in ways you NEVER intended.

“No! 50 year old dad! I did NOT intend for you to pass out on that really cute girly settee I placed in the middle of the girl’s department while your kids run around and shop!”

NOTE TO SELF - if there is a surface about 18" high, someone will sit on it. No matter how brightly colored and covered in rhinestones it might be.

Saw some stuff on er. Who knows, maybe even Clooney “used” it. There are also a lot of other medical shows I don’t watch, could be there too. I know you can pay to place an item on those shows.

But what’s odd is to see them on ebay. New, these were 5-6 figure medical devices. I should start cruising Craigslist for some of my stuff on the cheap.

I still have my CCM Super Tacks from 1982. Great skate.

I’ve only seen an Icon Jeep randomly on the street. Also on the street were I live. Was walking the dog in the AM and saw it cruise buy. Called up the owner of Icon and he said the guy had just moved to the neighborhood. That was cool.

Don’t know if you saw it, but I posted i the ICON-thread I saw it featured on Discovery’s How it’s made. That would’ve been a career highlight for me…

Tangent: yo whatever happened to that How It’s Designed show you were supposed to partake in?

Tangent: yo whatever happened to that How It’s Designed show you were supposed to partake in?

Didn’t work out, but it was always a long shot. Fun to be a part of the process, and I learned a lot about TV contracts…

I think designing something ubiquitous like this would be awesome. I once was asked to pitch on parking meters and someone asked me why I was so excited about the project. To design something that is installed 10-20 per city block would be fantastic!

on a shelf at the goodwill…

I probably see them less often than I should because I can’t skate hehe.

Wha…! Huh? Wait… … . you designed skates for CCM, and you can’t skate!!! But yer CANADIAN Ray… isn’t that illegal?

My Tacks date(d) back to 1968; the only plastic on them were the white tip guards at the back of the blades. I loved those skates. The first time I had our rink’s skate shop sharpen them they ground the rocker right out of the blades. They were never the same after that.

Not Canadian, Wisconsinite. They should have asked me to design beer koozies.

On the other hand, it was a pure styling job. Women’s recreational ice skates.

Hmmm. Seems you have been in Canada for too long.

I don’t think so.

And I started skating late for a Cheesehead. I was 10.

Lots of phones in hotels - used to be Teledex, I don’t know who sub-brands the stuff. I guess that’s not unexpected though, as it was designed to be a hotel phone.

Some of our new stuff will be in the next Madden NFL game from EA. That’s pretty fun.

Sadly, this monstrosity, never intended to live, let alone be on Craigslist - IDEA Gold winner, relegated to being an E-bike: 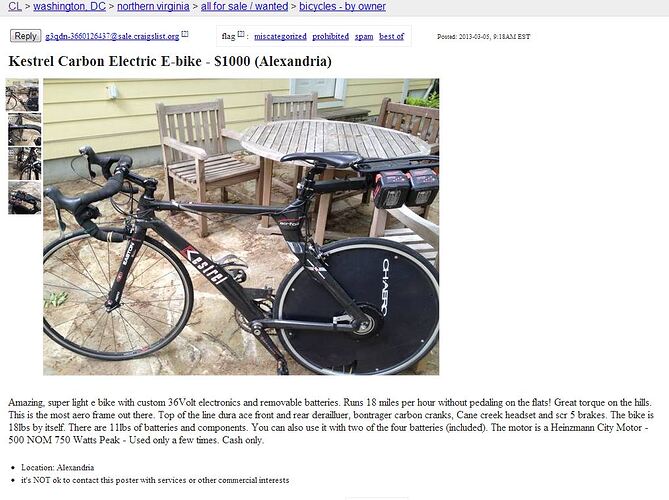 iab: My wife is allergic to cheese, so I think I’ve even started to censor my posts accordingly.