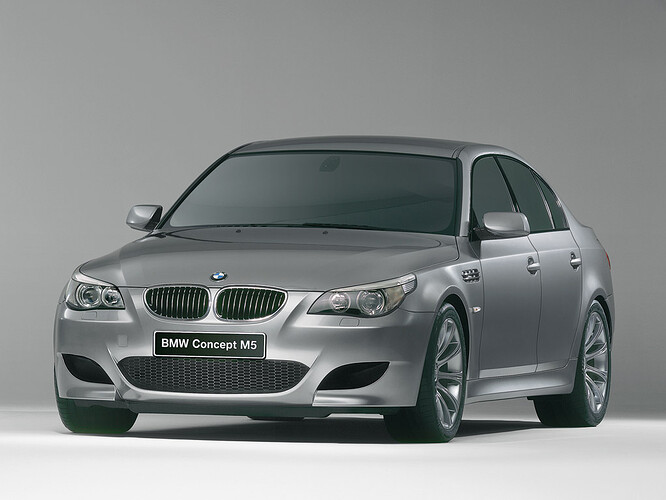 I assume you are mainly refering to the BMW “flame” aesthetic as being ugly. Maybe my dad was right, and the only taste I have is in my mouth, but I like the flame aesthetic. As for the H2R, I only think the nose looks weird, but for good reason. BMW needed great aerodynamics to get the performance required. I’m actually surprised they tossed on that wicked set of rims, they couldn’t have helped the performance.

I actually like the flame surfacing aesthetic, especially the way it was done on the x-coupe concept a few years back.

This car though has a lot of proportional awkwardness and odd surface development. The crease line that runs through the fenders has a beautiful curve and then hits an odd kink just below the headlamp and goes totally straight. The headlights seem to float, they are not grounded visually. There is an odd little lip on the front airdam below and on either side of the grill. The design line that runs from behind the front wheel, bowes down and then back up into the rear wheel cover makes the car look like it is sagging, it is done well on the z4, but not here. There is a nice chamfer on the bottom of the body side that wraps around the rear quarter that makes the thin shell look finished and like it has thickness, why not wrap it around the front which looks thin and plasticy…and on and on

…but, I am really ecited that they made a super fast hydrogen car. The only way the mass market is going to accepts alternative fuels as a viable possability is if manufacturers make cars that people will desire and aspire to. Starting at the bottom of the auto food chain and working up is…well, an uphill battle. Throw down some super fast race cars and maybe a Mercedes S-class and you will have people asking for it.

I think you are right about the poor detailing on the car. You point out some interesting things that I would have never thought about too. It seems though they exist for three reasons:

It is cool though that they made a performance H2 car.

I would have to agree that it is pretty ugly. It almost looks as if they got half way through a moddeling the front end and just gave up… leaving a car hiding beneath the surface somewhere.

I also personally quite like the flame aesthetic and don’t know why they haven’t applied it to other models. Think it would look good on the new 1 series for example.

I think this car is quite interesting. It seems like a very up-to-date reference to the old BMW 328 Mille Miglia cars from the late 30s. Although, it in no way competes with the sheer beauty of those 328s!(http://www.autogallery.org.ru/k/ba/bmw328mm1.jpg)
I really like the rear haunches of this car. I agree that the front grille is awkward, but I like the underlying forms. it’s really just begging for the original long vertical 328 grilles to fill out that massive snout. I also put my vote in for the flame surfacing. I just don’t like the way it has been applied to most of their production cars (ahem…5 series)[/img]

The long grill would be hot.

Some of those old racers where highighted in the book “Streamlining: a metaphore for progress”

yes. i own that book, actually. it’s really great! You’re like the only other person I know of who has ever mentioned that book! My fav. car in that book is definitely the mercedes record car that Rudolf Caracciola drove, with the giant elongated pontoon fenders. What a gorgeous machine. It’s too bad it was built by the nazis. That brings me to a point which might merit a whole separate topic…does it bother anyone else that in the last two years, audi’s marketing people have repeatedly invoked the “silver arrows” as their racing heritage, when in fact audi was only part of auto union (just happens to have the same logo) and the nazis funded the whole racing program? I think those were magnificent cars, but it’s very unethical to take them out of their historical context like that, I think. okay, now that’s a nice tangent!!

I’m going to introduce even more tangents. I think of the Nazi’s more as the first sponsors of racing teams. Many of the engineers and certainly some drivers did not agree with Nazi politics, but it was them paying the bills.

Just last week was the anniversary of the Bhopal disaster. On BBC there was a fake Dow PR guy that said they had realized their corporate responsiblity and were going to provide proper health care to the residents and so forth. The real Dow Chemical took only a few hours to dispel that myth.

So the question is, would we be this upset if Union Carbide or Dow were a sponsor? Do thousands of people somehow count less than millions?

No, it’s fine they use that period in their advertisments, as long as they don’t support the National-Socialist ideas of their old sponsor.

Mr-914, while I think that’s an interesting way of looking at things, i think that viewing the nazis as merely a “sponsor” doesn’t take into view the larger picture of why they sponsored the racing program (no other racing efforts were state sponsored at that time.) It was another way to prove germany’s technical (and racial) superiority to the world. Those cars were not merely a means to sell products. they were a symbol of a very sinister world-view, and that’s why I think audi is wrong in taking them out of their context. I mean, what about if Mitsubishi were to make ads about they great engines they made for the Zero? The domination auto union and mercedes had in the 30s is utterly different from audi’s recent domination of the sportscar championships. For example, the cars originally had swastikas on their headrests, and audi photoshopped them out for the ads. I wouldn’t reccomend they leave them in, but i think there is something ethically dubious about just saying…gee, let’s just sweep that under the rug. Still, I do agree with your point about dow. I mean, how about all of that TOBACCO sponsorship?? talk about horrible…

The Nazi’s were selling a product: themselves. They did the same thing that cig ads do. They said, “be like us and you will be ruling the world too”.

I didn’t know Audi was photoshoping the swastikas out of the images of their GP car though. That is too bad. The engineering of their race cars never killed anyone.

Ironically though…I sometimes see car ads or brochures which use the GP car or Indy car minus the cig ads…hmmm.

that’s true. i’ve seen that too…