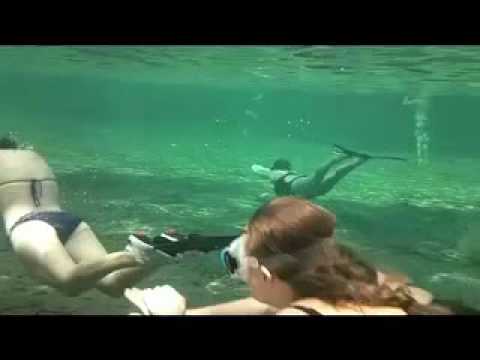 WATCH: Ten UC design students recently tested prosthetic tails that hold promise in revolutionizing sea diving. That experience was part of an innovative UC studio course linking design students with entrepreneurs, and it will be the subject of a presentation at an international design conference in August.


Ten students from the University of Cincinnati’s nationally number-one ranked interior design program recently returned from the Florida Keys where they tested – and provided feedback to the inventor and manufacturer of – unusual foot appendages that aid human sea divers to swim like dolphins.


The mechanical foot fins could be said to transform users into something like mermen and mermaids, according to Brian Davies, associate professor in UC’s School of Architecture and Interior Design, who is leading the student testing of the products. He is doing so as part of an ongoing series of courses on design for extreme environments and as part of an experiment within UC’s internationally ranked College of Design, Architecture, Art, and Planning to link design students and classes to the needs of entrepreneurs.

MORE ABOUT THOSE FLIPPER FINS AND THE UC COURSE
According to coverage by National Geographic Adventure, the tails – attachable to human feet for dolphin-kick swimming – help users attain speeds twice as fast as the swiftest Olympic swimmer.


They are the brainchild of inventor and manufacturer Ted Ciamillo, founder and president of Ciamillo Components, Inc., in Nicholson, Ga. Ciamillo successfully designs and manufactures light and powerful aluminum bicycle brakes. He is now fine tuning his offering of Lunocet fins and turned to UC’s Davies because of Davies’ extreme environments design courses and to obtain informed feedback from design students.

He added that many design courses link students to the needs of established corporations and non-profits. Few courses in design programs link experiential learning to the needs of entrepreneurs. “This is an alternative future model for design training and experiential learning,” Davies said, adding, “It gave our students – many of whom have real-world experience thanks to our required cooperative-education quarters – insight into something they hadn’t seen before: An entrepreneurial business where design, manufacturing and distribution are all housed under one roof. They’ve all worked at places where design takes place at one site, production at another, and distribution at a third.”


EXAMPLE OF STUDENT INSIGHT
One design student participating in the course and Lunocet testing was Kate Schneider, 24, from Columbus, Ohio. She admits to not being an especially good swimmer. However, that very inexperience allowed her to make valuable marketing suggestions.

She explained that the group product tested a hydrotour in the Florida Keys, actually strapping on the fins and taking the tour.

Said Schneider, “While the tour was excellent at explaining the product and its advantages, it did not explain the ocean context for that day related to the current, wave height and speed, and visibility. These were things I had no experience with. I would have found it very helpful to have that information because, quite frankly, between catching a current and using the Lunocet fins, I was moving very fast and felt like I didn’t know where I was within 10 seconds. If you’re going to market this great experience, you can’t assume that consumers have knowledge that correlates with best and safest use.”

She added that it was great to have a real-world retail client who offered immediate feedback and just as great to get to try out the retail products they were researching.

Schneider did find one down side to the fins when doing testing in UC’s Olympic-sized pool: “When you’re in the water with them, you feel like you’re moving like the aquatic version of ‘Road Runner.’ It’s like wearing rocket shoes. But when I took the fins off to swim to the ladder, I felt like I was moving in slow motion.”

Looks really cool. Would love to have tried these out.

But as a UC student, I never heard about this project

Seems like it was a class geared towards interior designers and “extreme environments.” Cool none the less.

Yes, the trip was through a 4th year interior design retail studio. The studio focused on developing retail strategies for the fin.