Some troubles with my concept for a project, so I am searching for alternative methods to fix my music device on clothing. I was going to have it on the shoulder but of course it’s near impossible. The shoulder, however, is the ultimate position for what I am trying to convey concept wise, so I really want to stick to my original idea as much as possible.

So I am looking for methods to allow the user to wear my device on the shoulder, whether mechanical or by some adhesive that I am not aware of. Does anyone know of materials that will create enough grip on various fabrics to hold it in place? It’s not for sports, but has to be grippy enough to stay on during normal activities. The idea is that the user can just grab it and put it on effortlessly and not having the need to wear it or fasten anything.

Why not some sort of clamping device, or is something like a clothespin too low-tech?

I’m sure our friends at 3M have some adhesive or other technology that would help.

had to think about this. my first thought was hook n loop, but it wont hold to some fabrics. also thought of those medical wrap clips. but teeth might damage some fabrics.

there might be developments in the labs. intermolecular bonding (Gecko feet) and bio-mimicry of insect/arachnid feet (read article but forget where). probably see both developments. for concept i’d stick (no pun intended) with the bug stuff. probably develop quicker. Velcro tooling is complex. it could use replacement.

now i think about it, one relevant article might have mentioned 3M. 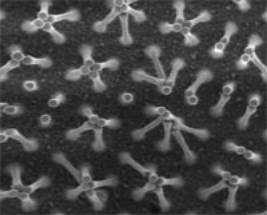 Researchers at the University of Manchester have successfully synthesised Gecko Tape, an adhesive material that allows the wearer to scale vertical surfaces and walk across ceilings. Posted June 2003

no clue where i read the insect-mimic stuff. hope this helps.

They also feel that there is no scientific benefit, so have limited their demonstration to the gecko toy.

I think I found them an opportunity

Thanx, that helps a lot!

Now I remember that last semester my instructor invited some designers in for our presentation. One of them is a product manager at 3M. I think I will see if I can get some info from her instead.

If possible I want to get a sample of whatever I maybe using, even to use it on the model because this is something I am trying to prove and achieve. I had the experience, in an interview, of the designer dismissing my proposal in my portfolio just because he didn’t think it will work and I did not have a working model to prove it. It sucks, and I want to avoid that.

I did not really think in the direction of mechanical device that will “clip” the player onto clothes because the shoulder is the area where there isn’t any fold or edge to begin with. A pin will be a no-no because that will mean damaging the fabric. The gecko tape, if performs as described, will be my ideal option.

what about a magnet on the back inside the clothing ?

that gecko article was in ID magazine last year sometime if I remember rightly.

Looks really close to a “Pop Swatch” (circa 1986?)
With those, you could attach them securely to any fabric (like two parts of a button coming together with your clothing inbetween) …But you risk stretching the fabric out.

You could hook around the neck opening and clasp through the fabric with a magnet. Or if you don’t mind holes, use a pin (like the theft-deterrent tags.)

You could design a “capelet” that uses the neck as it’s anchor.

Magnet on the other side of the fabric doesn’t sound very convenient. Furthermore, it works for light objects. A device like this will probably be too heavy.

You are right about the button. Also, if the person wants to fix it on his leather jacket, the leather may be too thick to secure on.

Yes I am looking into clipping on the collar or the neck opening. Again, anything too heavy will drag the clothes down, means I will have to reduce the size a lot.

Another thing about this device, is that I am using the Feonic technology which will use the upper shell as the speaker itself. Thus the device mustn’t be too small, or else the vol. will not be great enough. The power button is embedded in the sounder( the part that vibrates the shell).